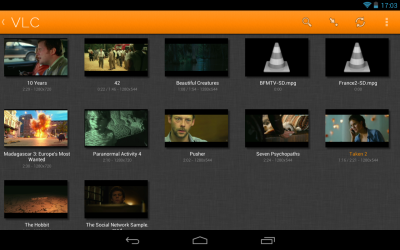 The VideoLAN Organization development teams have been mighty busy this week with two different versions of VLC receiving updates. VLC for Android Beta 6 has been released, the latest in a series of rapid fire updates for the project. With Beta 6, VLC for Android continues to improve compatibilty and performance across different Android devices and different versions of Android. Beta 6 also comes with an updated interface that looks to do a better job of taking advantage of the different screen real estate available on a phone and tablet.

VLC media player, meanwhile, has been updated to version 2.0.4. The update brings a number of bug fixes and performance improvements, particularly on Mac OS X, with improvements in UI performance and better support for BluRay. Support for YouTube, Vimeo, Soundclud, and Koreus streams also returns in 2.0.4. The new feature that is likely to draw the most attention is support for Opus, the open source codec recently standardized by the Internet Engineering Task Force. Opus was designed specifically to provide high quality sound for Internet streams, and though I have yet to see any online broadcasters offering Opus streams, it is nice to know that VLC will be standing by, ready to receive them.

For a summary of the most important features, you have: