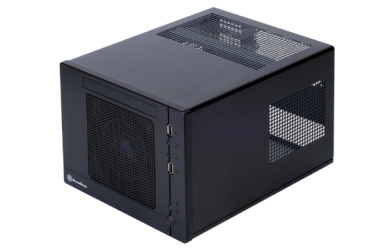 This summer proved exciting for fans of the Mini-ITX form factor with a number of intriguing new cases including the BitFenix Prodigy and the Fractal Design Node 304 grabbing some time in the spotlight. I was also a bit taken with the new Cooler Master Elite 120 as it reminded me of a smaller version of my once-beloved Antec Aria. However, in the midst of these exciting new releases, it can be easy for one to overlook the classics that have withstood the test of time, so it is fantastic to see a site like Anandtech choose to run a review of a Mini-ITX chassis standby like the Silverstone Sugo SG05. The Sugo SG05 has been around for a couple of years, but as they are wont to do, Silverstone has continued to refine the case with new revisions to keep it up-to-date. The SG05 was the first Silverstone case to catch my eye and, along with SG06, remains one of my favorite cube-style designs and it sounds like it Silverstone got a lot more than the look right with the SG05.

Meanwhile, in the background, SilverStone has been campaigning for us to take a look at one of its older cases, the Sugo SG05. They’re of the opinion that the SG05 is capable of producing stellar performance while being smaller in volume than the competition. This case has been around for a little while, but was it ahead of its time?