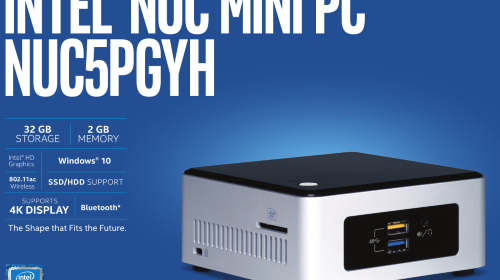 Like the rest of Intel Atom systems, home theater PCs (HTPC) based on the CPU have come a long way over the last few years. The Intel NUC5PGYH offers hardware accelerated video decoding up to 4K (HDMI 1.4b output) via the quad-core Intel Braswell Pentium N3700. Now add in 7.1 multi-channel audio support, Windows 10 preinstalled, RC6 CIR (consumer infrared), 2GB DDR3L RAM, 32GB eMMC, and support for 2.5” storage expansion. This particular low power system has the makings of a serious media consumption device. And when considering that you can bring one home for $250/£220 ($280 SRP), even the price sounds too good to be true.

There are two immediate surprises to be had from unboxing the Intel NUC5PGYH. The first (and quite problematic) is that there is a misprint on the packaging that indicates inclusion of an Intel Gigabit NIC, when it is really Realtek. The second, is that the system has switched over to the same global 65W/19V used by other NUC systems. Also, like the other NUCs, the NUC5PGYH is VESA mountable and includes the hardware necessary to make that happen.

You get a lot of system for the price. It includes a quad-core Pentium CPU with integrated graphics, 2GB DDR-3L RAM, 32GB of storage, Gigabit Ethernet, 802.11AC, Bluetooth, RC6 consumer infrared (CIR), and Windows 10 Home (x64) – everything you need to get going with a consumption oriented HTPC. Intel was kind enough to include a 1TB Western Digital hybrid hard drive in the review sample. With that and the right tuner, it was possible to be fully operational within a few minutes. That said, there are a few corners cut. The most noticeable one is that the chassis is now plastic over steel (vs. aluminum). But, like the DN2820FYKH, the CIR does not support discrete On/Off commands (making macro programming more difficult), and only one RAM slot is provided. I cannot knock the materials change. It still looks nice, the difference is only apparent quite close up. Considering all the extras and SRP, it totally makes sense. On the other hand, limiting the device to a single channel is much harder to defend. As capable as the NUC5PGYH is, it would be more so with twice the memory bandwidth.

I was very happy to see the upgrade to the full Intel Visual BIOS, both from a features (e.g. iSCSI, additional settings, etc.) and usability perspective. BIOS updates are a breeze now so you don’t even need a thumb drive anymore. And the same flexibility to define S3 power LED behavior that I love is present.

The NUC5PGYH’s list of HTPC capabilities is outstanding considering the price. 3D, 4K (HDMI 1.4b @24Hz), full hardware decoding support, including 4K HEVC, 7.1 PCM HDMI audio, and Intel Quick Sync are all supported. The only limitation I found to the common feature set is that bit streaming HBR audio formats like Dolby TrueHD and DTS-MA do not work on Windows; this is frustrating because it is an artificial limitation. The hardware supports the feature and it works great in OpenELEC. Of course, now that full support for HBR audio decoding is available from commercial and open source software players, this is mostly an academic restriction. Lossless audio is lossless audio, no matter where it is decoded. 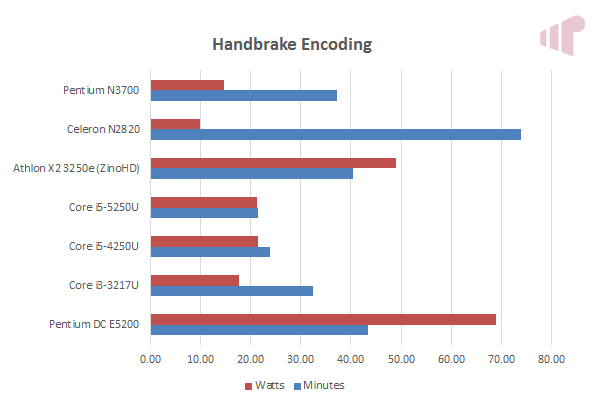 I like to use Handbrake to measure multi-threaded CPU performance. While collating the results, I noticed something interesting versus a historical entry that I have not included in the result set for quite some time. The Braswell Atom “Pentium” N3700 is faster and significantly more power efficient than the Intel E5200 “Pentium” based on their Core architecture. Now, it is important to remember that the E5200 is quite old, but I thought it intriguing given the shared nomenclature – clearly there is some legitimacy in the shared nomenclature. Looking at the performance difference between the N3700 and the much more modern “Ivy Bridge” based Intel Core i3-3217U when transcoding the 30 minute 480i sample file, there only a 12.7% time penalty with a 19.7% power advantage. Atom is catching up, and I think it is clear that where it used to require some unpleasant compromises in performance, that is no longer the case, and can easily be considered in this space. 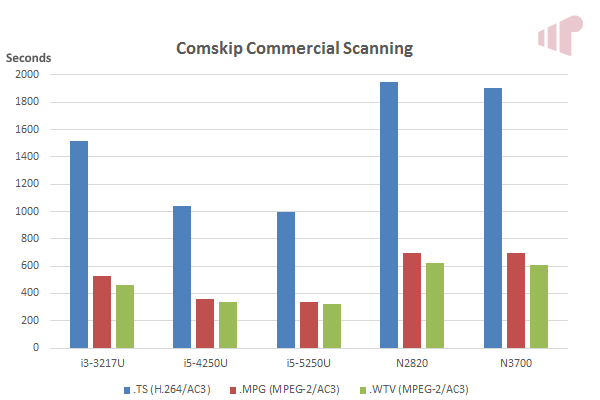 When looking at Comskip’s mostly single threaded performance on the three 60 minute test files, the Intel Core architecture’s per-core advantage is clearer, along with the marginal (1-2%) gain between Atom generations; keeping in mind that the N3700 has twice the number of cores as the N2820. That said, where it was once unthinkable to run the popular commercial detection software on an Atom HTPC, it is now quite reasonable in light recording scenarios, especially with four cores available for duty. 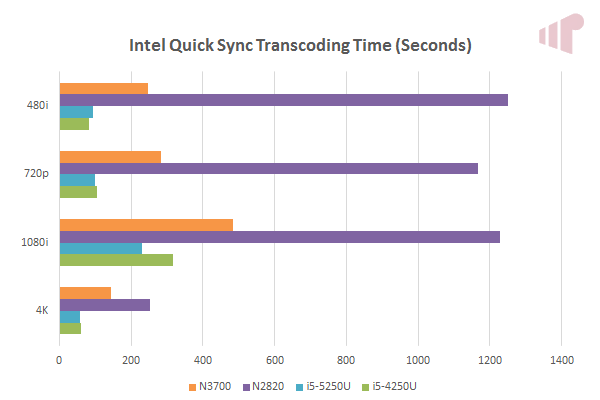 When it comes to Intel Quick Sync however, two things stick out immediately from the results. First, there is a massive generational difference between the two Atom based (N2820 and N3700) systems. And second, the specialized decode/encode hardware in Intel Core CPUs is significantly better. That said, the NUC5PGYH is still very well suited to the task, turning in 2.3x (4k AVC), 3.7x (1080i AVC), 6.4x (720p MPEG2), 7.25x (480i AVC) real time transcoding performance with the four files tested. 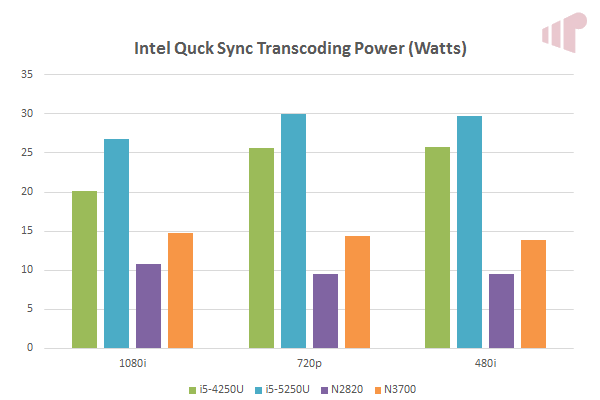 Where a large performance delta is present between the Baytrail N2820 and Braswell N3700, there is only a slight penalty in power consumption required. This is most likely due to the process difference (22nm v. 14nm) between the two chips. 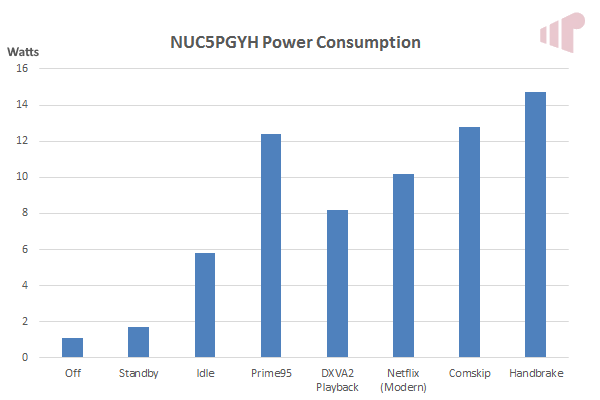 Pulling 1.7W in standby, and ranging from 5.8W to 14.7W in the various use cases documented above power consumption for the 14nm N3700 in the NUC5PGYH is excellent, especially considering its competence as a consumption and processing device. 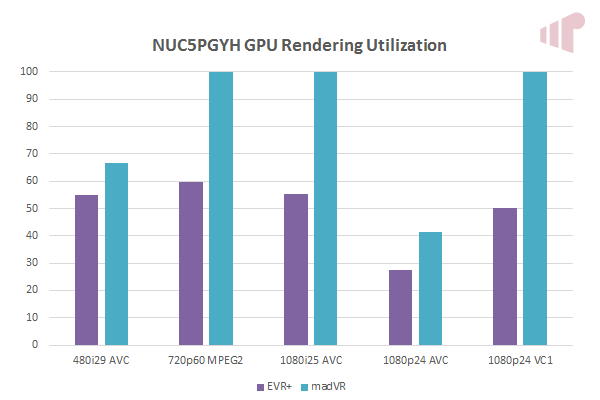 There are a couple areas of compromise with the Intel NUC5PGYH. Most notably, it lacks flexibility when selecting a video renderer. Now, given Intel GPU’s generally excellent video post processing (VPP) capabilities (noted earlier), this is not as much of a concern as it would be otherwise. But, it must be stated clearly that madVR’s GPU compute based VPP is off limits, even when using a less demanding algorithm like Mitchell-Netravali. GPU utilization quickly approaches 100% with most content types, resulting in unacceptable rendering issues. DXVA based VPP and rendering, either via EVR with a custom presenter that enables subtitles, or madVR (which should produce mostly identical results to EVR/EVR+), is well within the limits of the system.

Another compromise manifests in the form of noise from the included heatsink and fan (HSF). It does a good job of keeping the system cool (peak chassis temp measured at 42.3C) even after hours of Prime95, but even when not under significant load it still produces an annoying buzz not found on the Intel Core based NUC systems. I would not consider this blocking, but I know it could be better.

As expected from an Intel based GPU, levels are properly detected and respected. So white is white, and black is black.

Refresh rate accuracy is also good, although 720p60 does lag other formats marginally.

Up to this point, content testing has been conducted using DirectShow based players, which is the mechanism leveraged by most Windows based media players. Kodi is an exception to this, but happily at least, performance on Windows is largely identical to what is delivered via DirectShow.

Turning to the embedded Kodi-on-Linux OpenELEC platform we gain HBR audio bit streaming (demonstrating that it is not a hardware limitation), but give up hardware accelerated HEVC and interlaced VC1 support. Both of these are expected outcomes. Interlaced VC1 has been broken on Intel + Linux for as long as I can recall, and driver support for new formats on Linux always lags a bit. With a full Windows license included, I am not as certain as I normally would be about the value in using OpenELEC on this Atom based HTPC. This is mostly because with Windows you also get support for over-the-top (OTT) options like Netflix at no additional cost.  If you do decide to dabble with OpenELEC (or other Linux distros), I recommend throwing an old SSD in the box and installing the OS on that instead of the eMMC (if that is even possible) to preserve the Windows license.

I am impressed. There is no other way to say it. Intel has delivered a fantastic HTPC, at an outstanding price. The value packed into this $250/£220 ($280 SRP) system is amazing. You get CIR, 802.11AC Wi-Fi, Bluetooth, and Gigabit Ethernet included alongside 2GB of DDR-3L RAM, 32GB storage, and Windows 10 Home pre-installed. You can plug it in and watch your content in minutes. Naturally, there are a few things that I wish were better; like support for discrete On/Off IR commands, a less buzzy HSF, Windows support for HBR audio bit streaming, and another RAM slot. But, if these features were present, I can see how the Intel NUC5PGYH would cannibalize Intel Core NUC sales – which I imagine Intel very much wants to avoid. It is that good.