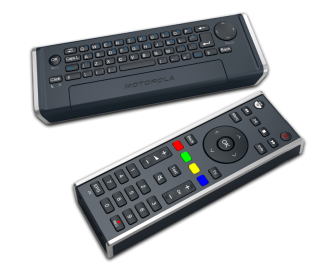 It has been about a year since Pulse-Eight announced that they would be selling the Motorola NYXboard Hybrid remote control. It was a pretty exciting announcement if only because we so rarely see a company so unabashedly targeting the HTPC market. The NYXboard is an interesting universal remote control for HTPC users for a number of reasons. For one thing, it supports both IR and RF, making it ideal for use with PCs and regular consumer electronics. The RF mode also integrates with Pulse-Eight’s HDMI to CEC adapter to control CEC-equipped electronics. The NYXboard is also double-sided, with a fairly standard array of remote control buttons on one side and a full QWERTY keyboard on the other side. The real clincher though is that the NYXboard is designed specifically to work with XBMC, though it should work well with most HTPC software. The limited angle of the IR signal is a bit disappointing, but it sounds like something that one could get used to with experience. Otherwise, there seems to be a lot to like about the NYXboard.

Pulse-Eight is one of the companies tracing its roots to XBMC, and it is no wonder they have a host of interesting products in the HTPC space. We have already taken a look at their innovative HDMI CEC adapter product, and today we have their universal remote up for review. The Motorola NYXboard hybrid remote from Pulse-Eight is unlike any other remote we have evaluated so far.