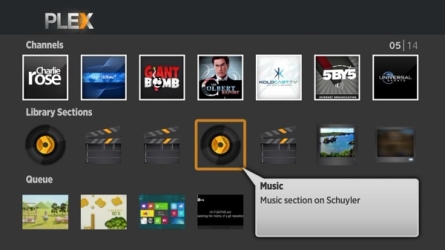 Plex has offered a private channel for the Roku family of streamers for quite awhile, but the Plex team has announced that the official Plex Roku Channel in finally available in the Roku Channel Store. It’s not just a change in status either. Roku for Plex has also been updated with a number of new features. The new version includes a revamped UI with a grid layout similar to the recently updated Plex for Google TV UI. There is also full myPlex support to simplify setup, audio and photo support, and Direct Play to avoid transcoding when possible. Roku boxes have a tendency to be a bit picky about accepting file encoding, so I wonder how often turning on Direct Play will prove to be hindrance rather than an asset

They have a line of lovely little devices, starting at just fifty bucks, capable of 720p on the low end, and 1080p and Angry Birds on the high end. They also have a great SDK which allows third parties to write Roku Channels, and we’re extremely happy to let you know that as of today, the Plex Roku Channel is now officially available in the Roku Channel Store.