Damn my car being due to get replaced (yeah, me too)…  I could’ve gone with something like this instead!  If only the Stargate could transport me to work, I’d be able to sell the idea to the wife.  Anyway, this theater looks fantastic!  I still don’t understand why people insist on an ODD number of seats in any row… 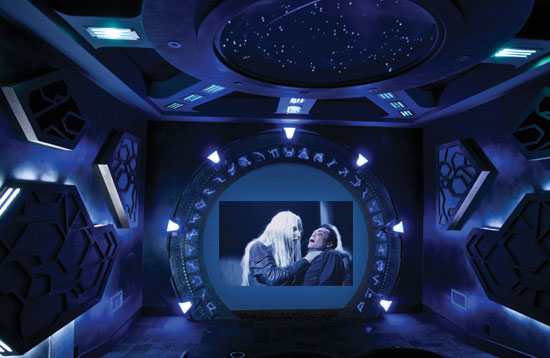 Jacob Yarmuth’s very cool theater in Louisville, Ky., has the Stargate — or at least a replica of the one used in the Stargate TV series and movie to commute across the universe. It surrounds a 10-foot diagonal circular screen
that shows a 96-inch diagonal image. The circle within the Stargate can
also light up blue, mimicking the water that appears in the show’s
Stargate prior to transport.