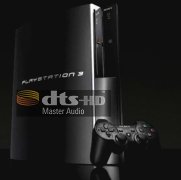 The new 2.30 firmware for the PlayStation 3 adds the ability to decode the lossless DTS-HD Master Audio (and the lossy DTS-HD High Resolution format too) that Fox Blu-ray releases have used since day one.

This long awaited (and long rumored) update completes the features of the PS3’s Blu-ray capabilities and makes it pretty much the most full featured Blu-ray player available. Sony has had an incredible track record with updates over the last 6 months or so. Version 1.80 added fairly high quality standard DVD upscaling. Version 2.10 added Blu-ray BonusView (profile 1.1) support. And the last update, version 2.20, added BD Live (profile 2.0) support. And there are more refinements in future firmware updates on the way including noise reduction enhancements and performance tweaks.

With the PS3 also being a decent media streamer it might just be a great option for people who don’t want a full blown PC in their living room. Now if only we could get the DVR abilities those in DVB standard countries are getting.