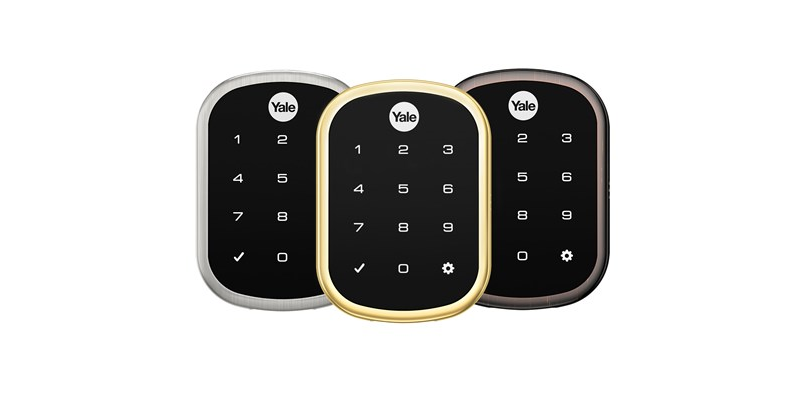 Adding keyless entry to your home is a great way to enable access without requiring anyone to carry around a physical key. Whether that is a dog walker, your kids, or when you step out for a run. Having the option to provide a PIN code also makes it much easier to manage distribution and removes the risk of a lost key. There are several options available in this market, but the Yale Assure Lock SL (YRD256) stands apart by being completely keyless. With multiple finishes and several home automation modules available, this deadbolt can integrate with everything, and at around $220, is not costly either.

The Yale Assure Lock SL (YRD256) comes in sturdy retail friendly packaging. Everything is well protected and easy to remove from the boxes.

Alongside the adjustable deadbolt and lock assembly are instructions, a strike plate, and several lengths of screw (pick a set based on door width). Three finishes are available for the Yale Assure Lock SL: bronze, brass, and nickel. This should provide an option for every home. The model I have is bronze and came with a Z-Wave Plus module. Besides these color options, it is also possible to configure the deadbolt with Apple HomeKit, ZigBee, or even without any home automation integration (seriously?). It should be obvious by now, but probably worth noting explicitly that the YRD256 is completely keyless, as in there is no physical key. This differentiates if from other models that provide keyless entry, but still use keys.

I love the sleek look of this completely keyless Yale deadbolt, its solidity, and that it has a 9 volt terminal on the bottom to mitigate the “batteries-are-dead-OH-NO” that can happen with a battery operated door lock. As much as I appreciated the previous generation’s completely keyless implementation, it just did not have the same appeal as the YRD256. Mostly because it looked the same as the keyed keyless deadbolt, but without the keyhole. So it felt like an afterthought instead of a device that fully embraced the potential of the form factor like the Yale Assure Lock SL does in its minimalist approach.

Yale claims that the installation process can be done in minutes, and by my clock that is very fair – at least for a retrofit. All in, it took me around 16 minutes to remove my old deadbolt and fully integrate the Assure Lock SL into the door and Vera home automation controller (HAC). Had I remembered to move the deadbolt itself into the extended position before screwing it into the door, and checked that the strike plate was the right size, this would have taken even less time.

This is even more notable because even though the physical installation process for previous door locks has been equally quick, I was pleasantly surprised when the YRD256 joined the Z-Wave network on the first try. I did not have to move the VeraPlus within 3’ of the door, or struggle with key exchange (a first). I suspect that the step up to Z-Wave Plus in this model played a role. Historically pairing Z-Wave locks with a home automation controller (HAC) can be a little problematic because of the additional steps required as part of the secure key exchange. So, this is a very welcome improvement.

For comparison, the Yale Assure Lock SL (YRD256) and Yale Touchscreen Deadbolt (YRD220) are shown above. As I mentioned before, we can see that the YRD256 is flat top-to-bottom where the YRD220 is at slight angle.  That is not the only difference between the keypads. Yale has also swapped the * and # on the older model for a much more sensible ✓ and ⚙. While this may seem like a small thing, it is a massive user experience (UX) improvement especially for casual interactions (e.g. extended family, cleaners, etc.) with the deadbolt. It is much easier to explain, and have them remember, how to authenticate to the lock because pressing ✓ is much more intuitive than * after the code. Also, as an unexpected benefit of the angle, because the reflective surface is perpendicular to the ground, instead of at a slight upward tilt I have found glare to be much less of an issue on really bright days compared to the older YRD220.

Programming the Yale Assure Lock SL is much easier as part of a home automation system, but everything that is exposed here, except events, can be set via the keypad on the deadbolt itself. The most useful option is the ability to have individual PIN codes for everyone. The ability to timebox the codes coming in at a close second. There are quite a few other options that can be personalized; controlling volume, auto-relocking, one touch locking, privacy mode (which can disable all codes), and lockout limits to name a few. The list is reasonably comprehensive, but lacks the ability to randomize number display, which is unfortunate because this feature would make fingerprint attacks much more difficult. That said, if this is a blocking issue, as a workaround you can either create a few different PIN codes and flip between them, or use a sufficiently long numeric code.  Both of which dramatically escalate the inconvenience of attempting a brute force attack.

As the YRD256 is completely keyless, I thought it would be essential to test the 9V backup mechanism; which is demonstrated in the video above. The only complaint I have with the process is that it is a little difficult to keep the battery in enough contact with the right parts at the bottom of the keypad. But that is very minor and quite possibly exacerbated by having the door open during the test.

Keyless entry to my house is an important feature for me, but my favorite thing about the Yale Assure Lock SL is how the Z-Wave Plus module allows it to integrate into the home automation system. The most obvious use case for this is being able to check and set locked/unlocked state remotely. But as the deadbolt also provides events, it can be incorporated into scenes (the really powerful part of home automation). Here is a brief video demonstrating one example of this, where the door light turns on (if it is after sunset) when the YRD256 is unlocked.

The Yale Assure Lock SL (YRD256) is a good looking, well made, easy to install, and integrate keyless deadbolt solution. With Z-Wave, Zigbee, and Apple Homekit module options available, everyone with an interest in home automation can utilize this completely keyless door lock with HAC from Apple, SmartThings, Wink, Alarm.com, Iris, Vera, or other systems which support the installed radio. Whether that is just to change and monitor state remotely, or enhance the richness of the actions available in the home via events. Yale has provided an easy, affordable, and stylish solution to adding keyless entry and automation to the doors in your home.

Thanks to Yale for providing the Assure Lock SL review sample. 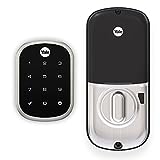 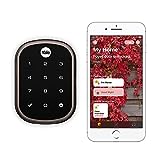 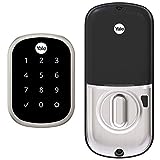 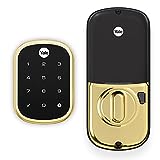 These are by far my favorite smart locks at the moment.