Life With A Plugin Episode 19: Radiotime 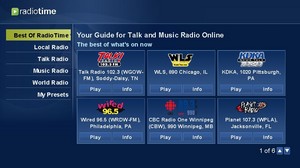 If you remember the days of the initial Windows Media Center with that wonderfully never used Radio button, then you will be pleased to see that there’s a plugin created which aims to increase the power of that. Of course, as I hinted, I don’t know many people who have or ever use an actual FM tuner inside the Media Center interface so I was curious as to what RadioTime would offer over the built-in application in MCE.

RadioTime is an application which has apparently gone under my radar
for quite some time. Based off of HTML (not MCML like the newer MCE
add-ons), it leverages the immense database of the designer company
Radiotime.com which offers visitors the ability to stream over 100,000
radio stations for free with their web browser.

RadioTime for MCE does the same, but via a 10′ remote control interface
from within Windows Media Center. Since it’s not based on MCML, the
plugin should work for both MCE 2005 and Vista MCE users, and is pretty
cool. You can browse by genres, see what’s playing and even maintain
your presets. And for the few users who actually have an FM tuner and
antenna integrated into your MCE systems, it will even support those.

RadioTime really shines with its quick responsiveness and most
importantly, the vast collection of radio stations available to stream.
While other plugins may try to scrape together API’s for this or that
radio station (maybe even the radio stations WMP offers), they’re
usually crippled by unknown stations, terrible quality or just having
streams go dead on them.

Not only was I impressed with the number of stations available, but I
was impressed to see many of my own personal favorite stations–Hot 97
(hip-hop), Bone 107.7 (Classic Rock) and ESPN Radio (c’mon Sports
fans!). All the stations came through quickly and with great quality
(for FM Radio). While it’s always great to get any sort of free music
on your Media Center, getting well known stations in there simply puts
this app in a league of its own.

If you have been following the Life With a Plugin series since the
beginning, you will remember my review of one of the most popular
applications still for MCE, MyMovies. I bring it up here because like
MyMovies, the only glaring weakness to RadioTime is that its based on
HTML instead of super sexy and more attractive MCML (Media Center
Markup Layer). The application does a good job with the limitations of
the older Media Center add-in abilities, but comes across as an older
application. Not that this would limit its usage for radio fans, but it
does not make for nearly as impressive an experience.

One actual issue I had was in regards to World Radio, which was
completely empty. I am not sure why this genre would suddenly not exist
anymore, but I’m sure some international folks would have appreciated
it being there. Hopefully it was just a glitch and will be repaired
shortly.

RadioTime is a fantastic plugin that epitomizes what Media Center needs
more of–applications which take a task you do on an everyday basis
with a computer, and brings it to your living room with the convenience
of your remote control. Playing music is a large component of Media
Center as it is, and while I wish this type of integration would be
adopted by Microsoft themselves (considering they have a dedicated
"Radio" button), their shortcomings opens up the opportunity for
companies like Radiotime.


While I wish the application would get a face lift sooner than
later, hopefully some more buzz for itself will help justify the
development investment for them. In a world dominated by MP3’s,
Pandora, Last.FM and satellite radio, it’s good to see an application
which takes advantage of the oldest form of audio (and still the most
popular) with a twist–streaming FM radio.

One feature request I could think of, in the spirit of Media Center
(although I’m not sure of any legal ramifications) would be the ability
to timeshift radio. Have the ability to schedule recordings of certain
programs, since the app does have program listings. Having this ability
would more than easily make this a must have for everyone!