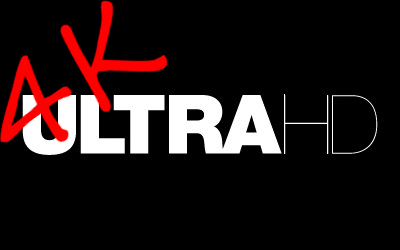 Last week, the Consumer Electronics Association announced its plan to label the next generation of high definiton televisions as Ultra HD, along with some baseline specifications to qualify for the label. Sony, for one, isn’t planning on toeing the line. Sony has announced that they plan to continue using the 4K moniker by labeling their future products as 4K UHD. To be fair, consumer electronics manufacturers are in not beholden to the labeling strictures of the CEA, so there is nothing wrong with Sony choosing to forge its own path, though one must wonder if this move is so much about providing clarity for consumers as it is about capitalizing on the 4K label that is starting to show up more often at theater box offices so as to create the impression that Sony’s TVs offer something closer to the 4096 x 2160 resolution of digital cinemas than the 3840 x 2160 resolution of UHDTV.

“To ensure clarity for consumers and delineate between today’s and tomorrow’s technology, Sony will continue to use the 4K moniker for its products and will market its future products as 4K ultra-high-definition (4K UHD),” she said.