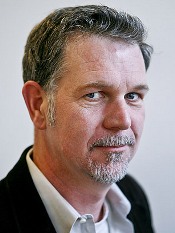 Sydney Finkelstein, a professor of strategy and leadership at the Tuck School of Business at Dartmouth College, has helped the New York Times put together a list of the worst CEOs of 2011. Included on that list is none other than Netflix CEO, Reed Hastings. Coming on the heels of a ForeSee report about Netflix’s customer satisfaction ranking taking a tumble, this might seem like a bit of piling on, but then I suspect most folks would agree that Netflix’s missteps this year have to be laid at Hasting’s feet. Make no mistake, this is not to suggest that Hastings has not done some incredible things as co-founder and CEO of Netflix, or that he can’t turn things around in 2012 and help Netflix shine once more, but 2011 will almost certainly go down as a year that Hastings wishes he get a do-over on. Plus, no CEO ever wants to find themselves lumped in with the co-CEOs of RIM. Do you think Reed Hastings can turn things around and make the 5 best CEOs list next year?

As for the embattled CEO of Netflix, Finkelstein writes that “if ever a chief executive found himself in the midst of what the economist Joseph Schumpeter called creative destruction, it is Mr. Hastings.”