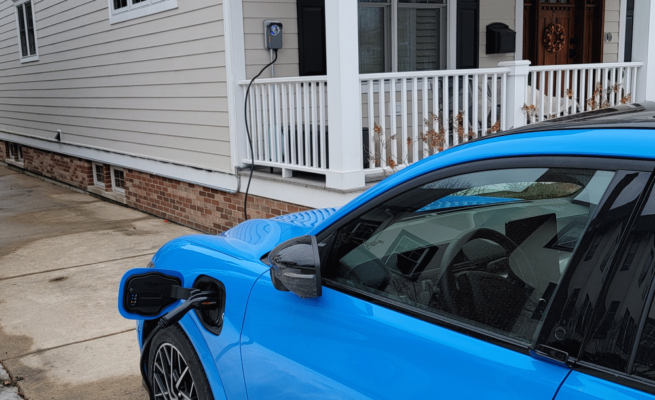 Being very new to the electric vehicle (EV) game, I thought it would be useful to share the biggest new-EV-owner pain point for me that I’ve solved (still working on the range anxiety thing :)); Level 2 home charging.

Technically, I didn’t need to solve this immediately because the portable EVSE (Electric Vehicle Supply Equipment) that came with my Mach-E supports both 120V (standard US outlet) and 240V charging. Obviously the 120V thing works, and that’s how I was doing it when I first got the car, but it was painfully slow. Fine for running around town, or preconditioning the car before running around town, but any significant driving meant that it would be days before the car was back to 80%. Getting a 240V option installed was always in the plan, just took a while to get everything lined up (quotes, scheduling, etc.).

I ended up going with a 50A NEMA 14-50 receptacle on the back of the house (putting one in my detached garage will require trenching the yard, might still happen, but can’t until the ground thaws) and a 60A circuit to the the 48A (11.5 kW) hardwired EVSE on the front porch.

With these things sorted, let’s dig into the questions I had (and have seen), and their answers as I understand them. As I mentioned, I’m very new to this, so if I got something wrong please be gentle in the corrections :).

Q: Do I need to install a permanent EVSE?

A: No. You can use a portable EVSE, and there are very few drawbacks to doing that as long as everything is inside a protected structure and you have a place to stow the cord and connector when it’s not in use. The EVSE that came with my car can only do 32A though, so while that definitely works, I was always going to upgrade it for home use because the car supports up to 48A. Most of the time it won’t matter, but there could easily be times when it would, and why not build for peak :).

Q: What are the costs/benefits to just using a portable EVSE?

A: Using a portable EVSE, especially if it came with the car, is the cheapest option. It will work fine for most use cases. The EVSE that came with my car is only 32A, so it’s not as fast as the car can support, and it’s a hassle to unplug it and stow it whenever I leave if I’m charging outside. So it works, but it’s not the fastest, or most convenient way to charge the car at home.

Q: Why should I install a permanent EVSE?

A: This is mostly around convenience, but charging the car outside introduces some theft and weatherproofing complications that you don’t have inside. Not so much while the car is charging, everything should be solid there (at least on the weatherproofing side of things), but when it’s not. How do you keep water/snow/dirt/bugs out of the charge plug when it’s not physically connected to the car? One option is to put the whole thing in the car, or a shed, or whatever, every time you leave, but that’s a hassle I didn’t want to deal with. Most permanent EVSEs have a holster of some kind to keep the nasty out of the charge connector, and they all have some kind of cord management. These aren’t insurmountable issues if you’re committed to using a portable EVSE. There are third-party holsters that you can mount on the house, many also provide something to wrap the cord around. So definitely doable, but it will never look as clean as a permanent EVSE installation.

Q: How many amps should I put in?

A: If you’re installing new service, unless you have a really good reason not to (like you’re amp limited) I wouldn’t put in less than 50A service to each location. That gets you up to 40A charging, which should be fine for most cars/people. Even if your current car doesn’t accept 40A, there’s a good chance that your next EV will. If it supports more than that, then going from 40A -> 48A should be as easy as swapping your 50A breaker for a 60A, if you’ve hardwired.

A: EVSEs should only pull 80% of the circuits rated service level. 60A * .8 = 48A. This is comes down to how circuits are rated for peak vs continuous use.

Q: Should I hardwire, or plug in my EVSE?

A: If you want to do 48A charging in a supported way you have to hardwire. Yes, some people run 60A through a NEMA 14-50 setup, but the 50 in NEMA 14-50 stands for how many amps the receptacle and plug are rated for. I wouldn’t do it, and I would question the judgement of anyone who did. It might work fine, and it might work right up to the point where it starts a fire. Hardwiring is also the best way to weatherproof the installation.

A: Obviously it would be better if I actually measured this and presented the numbers, but that’s more trouble than it’s worth (to me). So here’s Ford’s graphic on what the difference is. I wish they had included 40A in the mix, but since this should be relatively simple math, we can estimate that 40A = ~12 hours to go from 0 to 100% (which you should NEVER be doing). Key takeaway is that unless you drive a lot, 32A is fine. But if you’re installing new service, where a significant portion of the cost will be labor, why not build for peak? 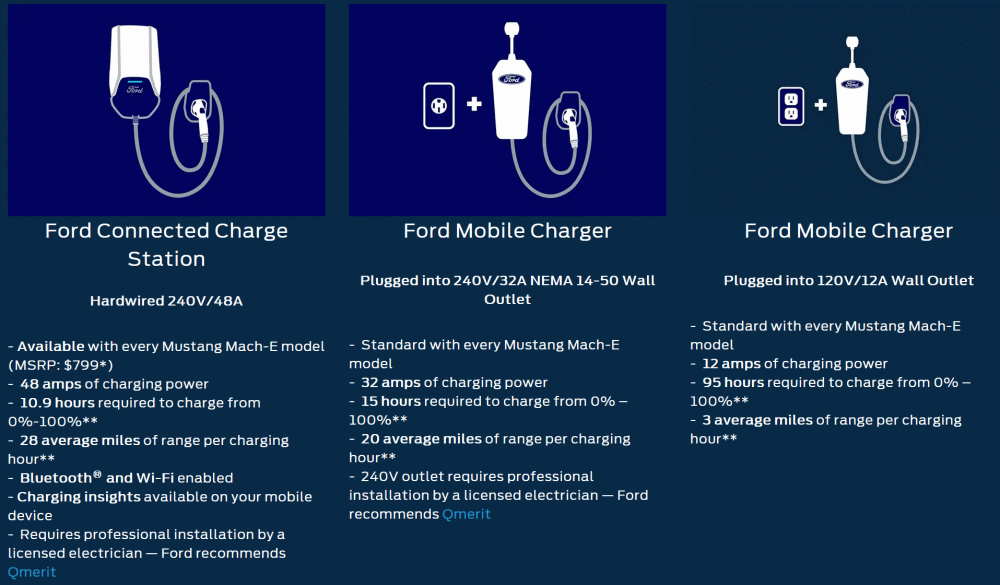 Q: Should I get a quote from Qmerit (notice how Ford recommends them)?

A: No. I contacted Qmerit for a quote because they were Ford’s preferred EVSE installer. Here’s how it went down. I filled out their form, took a bunch of photos, and then they asked me for $149 to get a quote?!? Had it been anyone else, I would have walked immediately because WTF? Then I waited, and waited, and waited… After two days I finally rang them up to see what was going on, and the CSR told me that my request had been forwarded to their local installer network and that I should wait a couple more days for someone to contact me about scheduling a formal assessment. I told him that waiting that long for someone to maybe call me, and maybe provide a viable quote wasn’t consistent with my expectations for how a service like that should work, and I wanted my $149 back. There’s no special sauce here, you could do the work yourself if you’re handy and have a 3/4″ pipe bender. I don’t have that size pipe bender, and I’m happy to pay a trained professional to mess with the high-amp stuff so I don’t have to. I got a few quotes from some local electricians. All within two days of contacting them, and work started a couple days later.

Q: How many quotes should I get?

A: 3-4. The electricians that quoted me were all over the place. I went with the guy who’s approach was the most sensible. Cost is a factor, obviously, but it’s not the most important thing. I had one electrician tell me that he was going to do $2,000 in drywall damage to save a couple hundred on the conduit and wire. I told him not to bother writing up a formal quote because that’s not how math works. Make them tell you how they are going to get the work done. You want to know that your priorities align before they start putting holes in the house.

Q: How much should I expect to pay?

A: This is a very difficult question to answer. Cost will be driven by where you live, where you want service, how many circuits you want, and the particulars of your house. I live in an expensive area, and the two lines I had put in were of very different complexity. The one on the back of the house is ~5′ from the breaker panel on the other side of the wall, the one on the front took wrapping ~90′ of conduit around the house. Not counting the EVSE, I paid $2,200 for both.

Q: Do I need a smart/connected EVSE?

A: No, but there are benefits to getting one. The main advantage is in the data they provide, and the potential for controlling charging. Some smart EVSEs can even do load sharing on a single circuit. There’s also the hope for feature improvements over time. Lastly, you can also control charge schedules, although most cars can manage that themselves. Given my preferences, I didn’t even consider a non-smart EVSE, and I’m guessing that since you’re here, we’re on the same page there :).

Q: What EVSEs should I consider?

A: The “State of Charge” YouTube channel is a great place to get detailed reviews on different permanent EVSE. The videos are very dry, so make sure you have a cup of coffee on hand. There are a few other resources, but I think that’s the best. If you’re lazy, and just want to know the TLDR; on all of the EVSEs I considered, I have listed them below, in the order I ranked them:

Q: There are some really cheap non-UL certified EVSEs out there. Should I buy one and save $200-$400?

A: IMO, no. A few hundred dollars to reduce risk that something that gets 40-60 amps of electricity isn’t going to destroy my house is totally worth it to me. Everyone’s value preferences are different, so it’s very much a tolerance for risk question. The only non-UL listed EVSE I considered, briefly, was the Emporia Smart Home EV Charger. It has all of the features I was looking for, and the price was perfect. I’m sure it’s fine, but I didn’t want to have the “what do you mean the EVSE that was hardwired to 60A service wasn’t UL listed” conversation should something bad happen. So I paid a few hundred dollars more for something that is UL, and Energy Star, certified.

I have the Tesla HPWC, but obviously that only makes sense for Tesla owners, and many of them still go with the ones you mentioned. I also went with a 60amp circuit so I could charge at 48 amps.

Please support this website by adding us to your whitelist in your ad blocker. Ads are what helps us bring you premium content! Thank you!
wpDiscuz
2
0
Would love your thoughts, please comment.x
()
x
| Reply