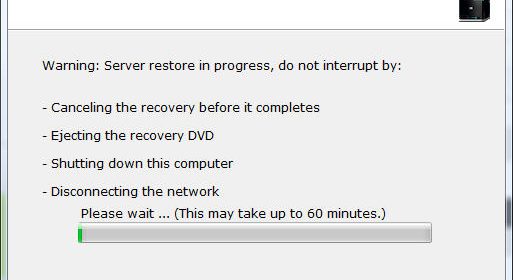 For those of you that read my Home Server challenge review , you will know that I have been living with HP’s original EX475 for several months now and have really had fun playing with it, and of course upgrading its memory to be a wonderful and reliable server. I had since taken the system and replaced all three of the available data drives–replacing the 2nd 500gb Seagate Barracuda 7200.10 drive with a quieter 1tb version, and adding two 750gb drives in the other two slots. My only complaint was that the operating system drive was MUCH louder than the other drives, with lots of seeking noise that I could hear from my bedroom during heavy activity. In an HTPC environment, that simply would not do!

So I did some research and saw my available options. Even though the HP does not include a video output, it still is capable of doing system recovery in the case of disaster. There’s mixed reviews on the forums, with some very nightmarish reports, but for the most part fairly positive.  After weeks of deliberating (literally) I decided I would take the plunge. I purchased a special Seagate drive optimized for home theater environments and read the instructions online very carefully.

The process is quite simple, inserting the Server Recovery disc FIRST, and then just following the step-by-step instructions. I connected my laptop wired just to make sure there were no other issues. I selected to do the 1st option of recovery, which is meant to recover the data, versus the Server reset which restores the entire server to it’s blank original configuration. The process completed relatively quickly (~20 minutes) , but then the data recovery portion took about 90 minutes longer before beginning the original WHS setup configuration where you set the name, password, updates, etc.

The updating software portion froze initially for some unknown reason, but since the Connector software had installed, I just cancelled and restarted without even the need of a CD. I eventually had to restart the WHS box, but then everything worked fine, and guess what….all my data appears to have remained intact! I was even more surprised to see that all my individual computer backups also were still there!

Of course I have to re-update to Power Pack 1 and re-add all my user accounts and add-ins as those are all lost as well, but overall I would say this was an overwhelming success. Within 2 hours I was able to completely replace the operating system hard drive and recover the WHS back to functional use while still keeping every bit of my data. Another impressive victory for this already overwhemingly successful machine!