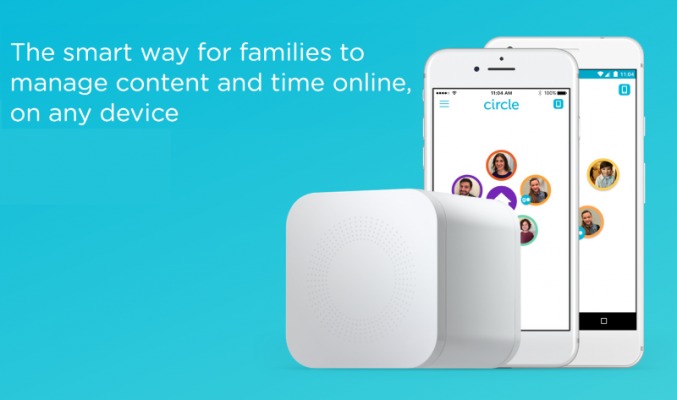 As my children have gotten older  and become more “connected device” savvy, I have been on the hunt for something which makes it easier to manage the amount of time they spend online as well as what they can see and do while surfing. The Circle with Disney Parental Controls & Internet Filtering network management device, despite its odd name, promises exactly that – with features to track and limit online time, sites, and content type based on an easy to use age-based bucketing scheme. For $99, this network monitoring and protection device seemed like the perfect solution to my dilemma, but comes with some serious drawbacks as well.

The Circle with Disney packaging is very user friendly, full of bright colors and fun icons to demonstrate how happy your kids will be having their Internet time tracked and limited. It also includes useful tips to ensure that the power cord is plugged in before using the device.

It is easy to find the micro USB power port on the Circle with Disney cube, but the 100Mb Ethernet port is hidden away behind a rubber seal. It is unclear to me why, but you will want to hardwire it to your network (although, strangely not during setup). Power consumption is miserly @ 1.85W, well within the constraints of power over Ethernet (PoE), and it easy to find a micro USB PoE adapter that will work with the device. Thermal images do not provide anything that interesting about the Circle with Disney, not even the location of the battery within the cube. It only confirms what I have found by handling the device – it gets slightly warm to the touch.

I must confess to not reading the directions thoroughly when first trying to setup the Circle with Disney. Falsely, I assumed that wired-is-always-better and connected it directly to the switch. As it turns out, for reasons that are unclear, and continue to baffle me. The device must be initially configured by allowing it to connect to your Wi-Fi using its Wi-Fi access point, before swapping that for an Ethernet cable… Once I followed the prescribed scheme, it was quite simple to get it all connected and working. I like that it includes a firmware update as part of the first-run, but I found the refusal to use Ethernet for the setup confusing, especially as it later recommends using a wired connection – as it should, given how the Circle with Disney works.

Once the device is running, there is a second stage to the first-run experience where users and devices are configured. It is intended to be very approachable and accessible to anyone, regardless of technical acumen.  And I think it succeeds reasonably well here. Profile creation and device assignment is straightforward as long as you do not have that many devices and the host names are obvious. Age based “Filter Levels” provide a good starting point for content limitations and the configuration of daily time limits (which allow for different limits for weekends) and bed times is intuitive. I also like that Circle with Disney proactively discovers and suggests including smart home gadgets in the “Unmanaged Devices” group. 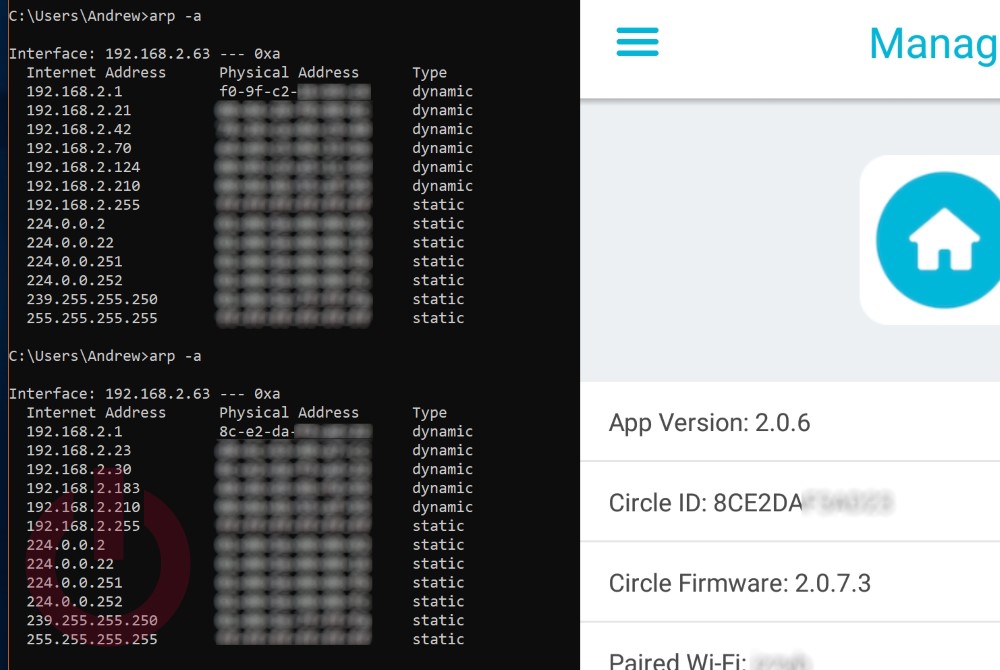 The reason why it is important to “unmanage” devices is because the Circle with Disney uses ARP spoofing for every device it “manages”. This forces all of the traffic for these managed devices to pass through its network connection – which is why it is so critical to hard-wire it to the network. Frankly, it baffles me that it would be possible to run this over Wi-Fi. The performance and latency would be terrible.

This man-in-the-middle approach is not free. Taking a simple speed test as an example, we can see a clear and massive penalty between a managed connection and one that is not managed. Interestingly, we can also note that even in the managed test, the total download bandwidth consumption is greater than what should be possible with a 100Mb Ethernet connection. There are a few ways this can explained, but my guess is that the device is simply being overwhelmed by the volume of data and is not able to maintain the ARP spoofing as it tries to inspect and filter the packets. This allows data to flow around the Circle with Disney instead of through it. Unfortunately, this is not the only scenario where the device gets bogged down to the point where performance is a noticeable problem. Admittedly, we have a lot of network devices, but even with a fraction of them included in the “managed” group timeouts, slowness and general strange network behavior is obvious to everyone. So much so, that even though I would like to make use of some of the beneficial ad blocking features personally, the performance is simply not acceptable when the Circle with Disney manages more than 10-15 devices. So only my kid’s devices are actively managed. I suspect that this relates directly to the sizing of whatever processor is in the device. Given its power consumption, it cannot be that powerful. Hopefully a higher spec CPU, and the addition of Gigabit Ethernet will be included in the next version.

Network performance is not the only issue I have with the Circle with Disney. I also find the user interface (UI) to be slow and sometimes difficult to use. Some of this comes down to the number of profiles we have configured – I like to set one up for everyone who will attach to the network. Which makes it difficult to select the one I want on the first try. I get the whole circle metaphor thing, but here it just muddles the experience. Other gripes include the lack of an IP address in the device page which makes it more difficult to assign devices, and that selecting the new device notification does not take you to that device – it just opens the app. Which, if it is already running, often hangs and must be removed from the app stack and relaunched manually.

Performance and usability concerns aside, the Circle with Disney does live up to its billing by providing detailed usage data, content filtering, and time limits for managed devices. It has revolutionized the consumption of online media for my children by automating the process. This makes my life as a parent easier. I do not have to track device time or worry about whether my youngest is watching YouTube or playing Minecraft when he should not be. That has been taken care of. And because so much of what they want to do on their devices is dependent on access to the Internet, many of the other problem areas, like not using devices within 30 minutes of bedtime, have as well.

There are a few areas of improvement here though, as exclusions must be handled on a user profile-by-user profile basis. I cannot just whitelist Google Play Music or their school apps globally, I have to go into each profile and do it. It is also difficult to manage shared devices, like a Smart TV or game console. Either they are unmanaged, or I have to manually flip user profile assignments when a different person uses the device. It would not be that complex for the Circle with Disney to solve this either by creating a “shared device” class that defaulted to no, or very limited, Internet access. When a user wants to interact with that device, they can use temporarily assign it to themselves for a set period of time. An open API would provide a mechanism for others to provide this feature for the platform as well, but alas the Circle with Disney does not have an open API. But, that is minor in comparison to the benefit gained in other areas.

After introducing the Circle with Disney to our network, it is not always clear why something has stopped working when it does. So before escalating to IT support (aka me), I have asked my kids to load filter.meetcircle.com. Most often, they have just run out of time. In addition to providing some basic troubleshooting, it also provides them with insight into how they spend their time on the Internet. I do wish that it was a little lighter on the “with Disney” marketing though.

I have very conflicted feelings about the $99 Circle with Disney. On one hand, it is underpowered and under spec for my network. It cannot deal with the volume of devices or internet traffic, so I have to carefully target which get managed and which do not. The user interface is slow, buggy and can be difficult to use. But, on the other, it provides an amazing level of capability to offload mundane time management tasks. This reduces conflict between myself and my children, as well as helping my kids understand where they spend their time and how to budget it. 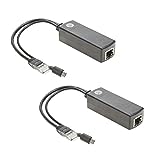 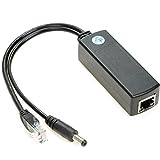 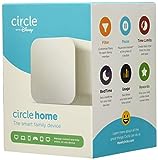 Couple of thoughts here. Because of the device name scheme – I had a hard time figuring out which devices were my kids Fire Tablets vs the Kindle e-readers. Another big issue – and the reason I eventually sold the product on Ebay, was that no matter the profile – it blocked everything. I couldn’t get on social media sites or Amazon streaming even on the Adult setting. It also had some issues with Steam games. I recently switch to Qustodio and I like it much better on the control side of things. It does slow down browsing a bit, but overall I like it.

Qustodio looks interesting. I didn’t know that existed. Thanks