Video phones have been a staple of science fiction for decades. Most of us have come to understand that video phones will never become the norm, simply because there are far too many circumstances in which we answer the phone but would never want anyone to actually see what we look like at the moment, or where we are. That being said, the video phone has its place, and what better place than the living room. There are few better uses in the home for a video phone or teleconference system than for communicating with far-flung friends and family and the living room provides a space where the entire family can congregate and interact with the biggest screen in the house. At $199, the Biscotti TV Phone strives to be an inexpensive way of integrating video teleconferencing into the home theater. Every call on the Biscotti TV Phone is free, but is every call worth making? 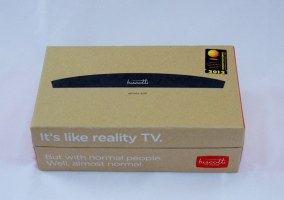 The Biscotti TV Phone comes packaged in a small box about 7 inches long and 4 inches wide. The biggest item in the box is the camera–a glossy black device the size and shape of the Italian cookie from which the company and device derive their name. The camera is flat on the bottom and presents a gently rounded profile across the top. The entire device is housed in glossy black plastic. Centered on the front, just below the camera, is the silver Biscotti logo. Place the camera on a stand and it would look much like a miniature Kinect camera. Centered on the back of the camera is the power port, flanked by HDMI plugs; one for input and one for output.

Other than the sleek little device itself, there is a power cable, a remote control, and a mount kit consisting of a couple of cable ties and some double-sided rubber sticky feet. The remote control is about 3 inches long and 1.5 inches wide. About half of the remote face is a rubber overlay for its six buttons. Otherwise, the remote continues the Biscotti’s glossy black plastic motif.

A basic setup for the Biscotti TV Phone involves positioning it somewhere near one’s TV, plugging in the power, and running an HDMI cable from the Biscotti’s HDMI OUT to the TV. A more advanced setup would add another HDMI cable running from the primary video output device like a cable box or AVR to the Biscotti’s HDMI IN. Passing the video signal through the Biscotti like this allows the TV Phone to lay its interface over the regular video signal and eliminates the need for the user to switch inputs when placing and receiving calls. 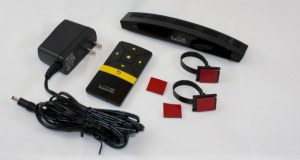 Unfortunately, the setup posed problems, the first being the lack of cables. The Biscotti TV does not ship with an HDMI cable. Keep in mind that Biscotti bills their device as the easy-to-use teleconferencing system for families and makes the point on their website that everything is included and does not list an HDMI cable among the things needed to get up and running. No HDMI cable means no TV phone calls to Grandma. Being the nerd that I am, I had a couple of extra HDMI cables laying around. The market demographic that Biscotti is targeting probably will not, adding an unexpected expense to the Biscotti TV Phone, particularly since this is the same audience that probably doesn’t know to buy their HDMI cables from someplace like Monoprice rather than Best Buy. I would have been surprised if the Biscotti TV Phone shipped with two HDMI cables to take advantage of the optional passthrough setup, but I am just as surprised that there wasn’t one cable.

The second issue was the camera’s size and heft, or lack thereof. The camera’s slim profile helps it blend in when sitting on top of a TV, but it’s so small and light, that the weight of just the power cable is enough to pull the camera down off its perch, never mind attaching a pair of HDMI cables. The included double-sided sticky feet are intended to help, but are not strong enough. Each pad is less than a square inch and the adhesive gradually weakens, resulting in the Biscotti taking unexpected tumbles down behind the TV. I ultimately found it better to place the Biscotti TV Phone on the base of the TV where the cables were moving laterally toward the rest of the AV equipment and not pulling as hard on the device. To be fair, my LCD is several years old and relatively thick by modern standards. With a newer, thinner TV, trying to mount the Biscotti on top of the TV, even as thin as the device is, might not be an option, negating many of the issues I encountered with the cables pulling the Biscotti down off its perch but also negating many of the advantages of making the device so small and light.

Once up and running, the remote control gets put through its paces navigating the on-screen setup. The main section of the remote control’s button pad consists of four directional buttons with a central selection button. Below the navigational controls is a single yellow button that serves as “back” and “device activation.” Buttons are separated by deep grooves and respond readily, making the remote easy to use without looking. 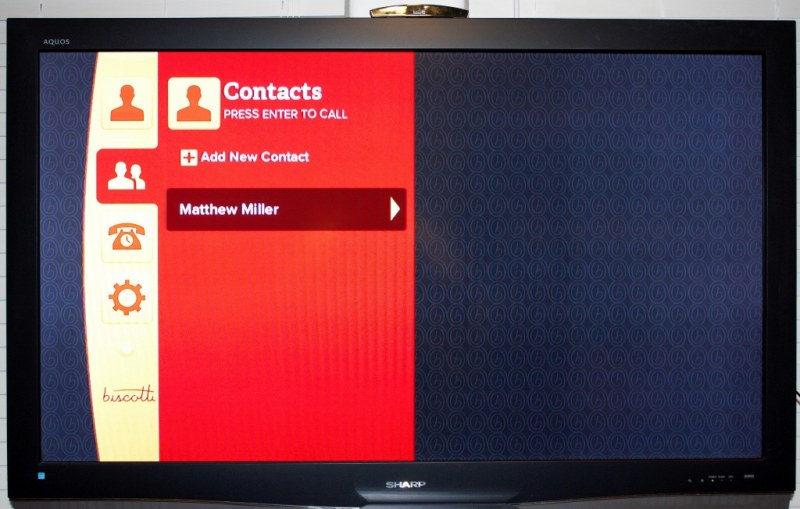 The on-screen setup walks a new user through the process of connecting to the Wi-Fi network, setting up a Biscotti account, and optionally attaching a Gmail account to the Biscotti account. Wi-Fi is the only networking option. The lack of ethernet port is probably a blessing given the device’s difficulties with cable weight, but also means that performance will be dependent on maintaining a quality wireless signal for steady bandwidth–for HD video, Biscotti suggests 1Mbs as a minimum. As one would expect, Biscotti users can easily place calls to each other, but adding a Gmail account allows the use of the Biscotti TV Phone for sending and receiving video and audio calls with anyone using Google Chat or Google+; all testing involved interfacing with Gmail users as I do not know anyone else who has a Biscotti TV Phone. The inclusion of support for Google services certainly helps to increase the functional appeal of the Biscotti TV Phone, though Skype interoperability probably would have tapped into a larger mainstream audience.

The onscreen interface is simple to use and attractive throughout the device. After the initial setup, the interface provides options for making calls, managing contacts, and accessing the limited selection of advanced options. Text is easy to read and the red and yellow color scheme helps make the menus pop when video is playing the background. When used in passthrough mode, the interface comes up over the regular TV signal, allowing for complete access to the Biscotti TV Phone without interrupting the show. The HDMI passthrough is definitely one of the big selling points, but unfortunately I came to realize that it was not an option that I would ever be satisfied with. While in passthrough mode, the Biscotti TV Phone can only pass along signals in 480p, 720p, and 1080i. When I first set up up the Biscotti, it was with the connection from the AVR passing though to the TV. Unfortunately, I spent a good hour trying to figure out how I had accidentally caused my WMC to set itself to 1080i before I thought to consult the Biscotti documentation and discovered the limitation. This may not be a deal-breaker for all users, but it is still disappointing.

Video quality was good, although not as good as the Microsoft Kinect camera or my son’s HD webcam. The camera’s wide angle lens easily captured my entire living room seating area and maintained a quality image even in relatively low light. In a completely lit room, colors were vibrant and natural. There is a softness to the image that belies Biscotti’s claims of HD video. How well the video quality translates into a video call depends entirely on the quality of the connection. A couple of test calls resulted in heavily pixelated or blocky video. Audio quality was less impressive, but adequate. The microphone did not have trouble picking up voices from anywhere within the room, but there was a discernible difference in volume from the closest seat to the farthest. Unfortunately, all of the discussion of audio and video quality depends on whether the system works at all. It was not uncommon for calls to and from the Gmail chat client to not connect or even be acknowledged on both sides. It also was not uncommon for a call to connect, but then the Biscotti TV Phone’s audio would not come through. Presumably these are not issues for Biscotti to Biscotti connections, but then the whole reason why the Biscotti TV Phone includes the Google integration is because of the limited deployment of Biscotti devices.

In the end, I can see the Biscotti TV Phone being a solid choice for staying in touch with technologically-challenged loved ones if the Biscotti TV Phone is deployed at both ends, assuming they are prepared to deal with the cable setup. Unfortunately, those same loved ones probably will not be prepared if they find themselves having to troubleshoot problematic connections to Google-based users.

Thank you to Biscotti for providing the Biscotti TV Phone for review.