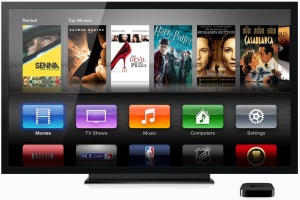 In our first look at the new 2012 Apple TV it was clear that the form factor and basic function was consistent with many of the other over the top (OTT) media streamers on the market, but it was the visual appealing user interface (UI) that really shines compared to similar devices which became apparent in the video walkthrough. What was not clear, given the brief time with the Apple TV, was how it performs after the first-impression sheen has worn off or how the recently upgraded 1080p iTunes content stacks up against established OTT services like Netflix and VUDU, or the current top-end option, Blu-ray. Having spent the focused energy to really get to know the device it is time to come back with answers to those questions, as well as provide a fuller picture of what is provided by Apple’s OTT streamer refresh.

As was previously mentioned, the packaging was simple, well done, and while it performed its intended function to perfection I was a bit taken aback by the relative uneventfulness of the unboxing experience. Not that it was bad or unsatisfying, just not up to the same standard of angel-choirs that usually accompany other Apple products. Also mentioned before, but well worth a second call-out, is the fantastic design of the power plug; it will now be hard not to consider the standard blocking-two-plugs-on-the-power-strip wart a con. An HDMI cable was oddly missing, although given the choice between the throw-away wire that is usually found within and the extra engineering required for the power supply – the answer is obvious.

Visually there is little that differentiates the new Apple TV from many other OTT streamers in its class. Cover the logo, and I suspect that few would be able to tell the difference between it and similar devices from Roku, D-Link or NETGEAR. This would not be the case if users were allowed to touch the devices however, as the new Apple TV has a level of fortitude and heft that shames the competition. The remote also stands out, but only visually as I often found it too small for comfortable use, and its minimalistic approach to providing buttons unhelpful – especially when navigating back through the multi-level application stack using the oddly named “Menu” button. Browsing large sets of data can also prove tedious without any “Page Up/Down” functionality. Given the similarity in appearance to the D-pad on an iPod I expected that it would provide this functionality, but sadly it does not–which was disappointing. While the remote was a slight let-down, it was nice that the Apple TV offers infrared (IR) so I did not have to force the family to struggle too long against an unfamiliar remote with the Logitech Harmony quickly replacing it. IR is convenient, and fantastic that it is an option given the clear usability advantages to universal remotes, however given the mounting flexibility provided by the Apple TV’s dimensions as a requirement it is limiting because line-of-sight is required. HDMI CEC should be present on any modern consumer electronics device aimed at the home theater; the absence of this feature is shameful made even more inexcusable by the HDMI only nature of the streamer. Although solutions exist for those dedicated to making it work.

I was pleasantly surprised to discover all of the knobs and dials Apple provides to end users. Color space – YCbCr (4:4:4 8-bit), RGB High, and RGB Low – is probably the most critical, not-often found setting (competing devices would do well to expose this as well), ensuring that luminance can be set correctly for the diverse pool of display hardware available. Assisting with audio compatibly some tweaks as well are provided on that side as well, with options for controlling Dolby Digital output and the bit depth of the PCM sent from the device. The lack of WPS would normally elicit reproach as entering a complex WPA key via an on-screen-keyboard is tedious, but with the recently discovered issues with protocol it is hard to hold it against any device. Where this deficit is excusable the Apple TV’s lagging WiFi capabilities on both 2.4GHz and 5GHz was not. Not only did it “forget” the wireless key on two occasions, but it also suffered connection and throughput issues not experienced by other WiFi based streamers compared in the same physical locations.

The representation of blacker than black (BTB) and whiter than white (WTW) were tested on a variety of HDTV and PC displays with each working properly assuming the correct color space setting was selected for the device; “Auto” seemed to be identical in practice to YCbCr, so do not be surprised if a change is required after hooking up the Apple TV to a less-than-modern-HDTVs. BTB/WTW were clipped at 16 and 235 respectively, which is not much of a con but it does make calibration a bit more difficult. Overall, the depth in options provided was quite good with only the device’s lack of HDMI CEC and subtitles treated as an all-or-nothing global setting being the only major gaps noted. UPDATE: 05/07/2012: @attilag let me know that subtitles can actually be toggled while using the device without navigating to the settings screens by holding down the select (center) button. While it’s not the most intuitive method, I do applaud its presence and thank @attilag for letting us know.

I found the UI visually appealing, but the navigation becomes tedious when working with large sets of data datasets or when finding oneself deep within an application stack. Access to content is a weak spot for the device to anyone not convinced of the intrinsic value of iTunes for non-Netflix TV and movies. Although, if you do not mind pre-converting files streaming H.264 in MP4 works quite well from a “Home Sharing” enabled PC, including 1080p60 just make sure to leave the application running on the desktop. Music can also be streamed from the same PC, so if that capability is present on the network the overall experience is quite good – at least in comparison with DLNA.

With support for 1008p, Dolby Digital and subtitles the Netflix interface is without question the strongest part of the Apple TV, and if not for the inability to toggle subtitles on a per title basis (UPDATE 05/07/2012: see above) the clear leader in this crowded space. The pivots are sensical and plentiful without crowding the screen, but most importantly they provide both a textual and graphical mechanism for navigating the experience making it approachable for anyone regardless of age. With many ways to access Netflix content on the main display, the Apple TV quickly became the preferred device with the most frequent (and demanding) users in my house – my children.

With iTune’s recent shift to offering 1080p content my expectations were high, but unfortunately I came away disappointed with the quality of the experience both in comparison to Blu-ray and more importantly VUDU. The picture quality is acceptable, comparable to what a 1080p Netflix title delivers, but not consistent with what I have become accustomed to from the alternatives. Results did vary with source material where picture quality in one of the titles (Immortals) was generally good (the movie itself was horrible) with only slight compression artifacts present throughout and significant issues present just in a few scenarios; i.e. large areas of smooth skin, scenes with significant contrast like the moon against a dark sky, and those requiring detail from a murky environment like fog at night. To be fair, many of these issues are also present in the Blu-ray transfer, just not so noticeable as to be disruptive to the immersiveness of the film. However, the second title (Alvin and the Chipmunks – Chipwrecked) exhibited much more serious flaws with omnipresent quality issues displayed throughout. Obviously this sample was not large enough to be statistically significant, but when charging $5 per 24 hour rental, and completive services are available, the gamble should be limited to the quality of the content and not that of the transfer.

Anyone without an Apple ID should plan for some frustration as the company that leads the “post-PC era” demands that not only a computer, but one with iTunes installed, be available if you do not also own an iOS device – because while it is possible to create an Apple ID, and associate a credit card with it using only a browser some special mojo that only iTunes can provide is required. The Apple TV does not stand alone in requiring access to a PC, but to the best of my knowledge it is the only to mandate the installation of specialized, unnecessary software or an expensive companion device to fully unlock its capabilities. 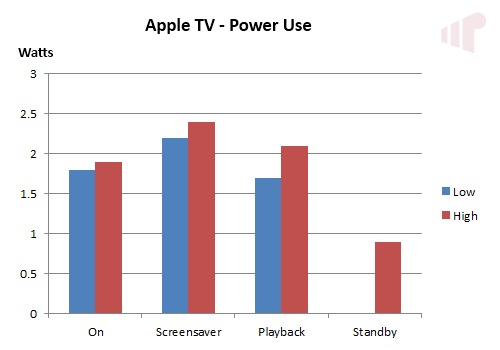 Along with the UI, power use is another area where the Apple TV really stands out. Overall consumption is miserly in comparison to any of the other OTT streamers examined previously, with general measurements close to the numbers captured during standby on competitive devices. Most importantly, the Apple TV actually enters a true low power state — ranging from 0.0-0.9W – when in sleep mode. This is most likely due to Apple repurposing the A5 system-on-a-chip (SoC), which was originally designed for mobile, to drive the Apple TV, but as there were otherwise no adverse trade-offs required for this choice the outcome is simply outstanding.

Having spent the time to get a real feel for the Apple TV it has become clear that while the device is hampered by weak WiFi capabilities, the lack of HDMI CEC, and a frustrating reliance on an antiquated method for creating/managing credentials the device’s UI and Netflix experience make it stand out in the increasingly crowded field of OTT media streamers. That said, the price ($99), reliance on iTunes for serving both cloud and local content, and the relatively small number content partners limit the device’s appeal to those not willing to pay a premium for a better Netflix experience if not already bought into the Apple lifestyle.