When selecting the perfect chassis for your home theater PC (HTPC) it can be difficult to strike the right balance between looks and capability.  With multiple tuners increasingly becoming available in smaller and varied packages at more competitive prices, the form factor revolution in the client HTPC space made possible by no-compromise integrated processor graphics (IPG) systems is now a tangible reality for the primary HTPC as well.  Wesena has aggressively pushed into this space with chassis like the Micro-ATX/Mini-ITX compatible all-aluminum E5, which with its CE visage offers a near perfect look for the A/V stack.  There is some compromise because of the ultra-low-profile form factor but with two hard drive mounts, space for a slim optical drive and enough expansion to provide a viable enclosure for your main HTPC, it warrants a detailed look.

Before taking a look at the case the packaging should be noted;generally we usually only mention in passing because it is not that interesting, but the quality of what protects the E5 in transit is hands down the best I’ve ever seen.  The chassis is not only encased in the thick, quality cardboard found around most enclosures but also almost completely encased in a foam surround and cloth-like bag.  It was hard to resist brutalizing it just to find out what Wesena must have envisioned the shipping process to be like – but the urge was successfully stifledJ.

Because depth of the review sample’s black finish (it is also available in silver) it might be possible to miss that, except for some parts like the feet and PCI blank, the Wesena E5 is constructed entirely from thick aluminum, with a quality of materials and chassis assembly almost perfect in execution.    A pair of USB 2.0 ports and a Multi-card (i.e. SecureDigital) reader are located on the front of the case, but placed behind a drop-panel just below the slim-line optical drive keeping any “PC”-ness neatly in check.  Only slot loading drives will work in the E5, and to operate properly the physical eject button must be located on the left side as it faces you because of the clever system used by the case to actuate it.

The E5 is flexible in respect to power with space for either a Flex-ATX or pico-PSU style power supply unit (PSU) depending on preference and component selection.  There is room for a Micro-ATX or Mini-ITX motherboard in the enclosure, but as an ultra-low-profile case only one expansion slot is available, limiting the value of selecting the larger board (more on this later).  Adequate cooling vents are available on the top above the CPU, and along the sides for some natural convection which is actively aided by the four fans included with the case.  The bottom is solid aluminum however, so the non-active flow of heat is more limited than it would be if holes were present at strategic hot points -under the hard drive mount, for example.  Aside from the exhaust holes, the top plate is also entirely aluminum except for the seven magnetic points which hold it to the base (flip switches on the rear of the case are used to separate the two) when they are in contact.  I had some reservations about this design choice initially because of the potential that vibrations from the active components would be transmitted to this “unsecured” plate causing issues with noise.  These concerns were unfounded however, with the magnets exhibiting enough grip to keep everything in place while also providing easy access to the internals when required.

A built-in infrared (IR) receiver adds extra polish to an HTPC enclosure because it removes the need for an external, unsightly, device and in this regard the Wesena E5 is a winner.  However, the RC-260 remote (Targa  Traveller 1577 x2 for Harmony users) and included IR do not provide a seamless experience in Windows 7 Media Center (7MC) or applications like the standalone version of ArcSoft TotalMedia Theatre compatible with that remote type (RC6).  Outside of 7MC the remote does provide two modes of operation which can be toggled by pressing the red (Windows Media Center mode) and blue (Windows Media Player mode) buttons along the bottom offering slightly different behaviors for some of the keys between states.  The implementation is marginally adequate in 7MC, with most of the buttons functioning as expected, triple-tap navigation is not supported however and several of the keys (e.g. skip/previous/info/channel up/channel down) do not work consistently across all of the experiences (e.g. skip/previous move tracks during music playback but do nothing when watching TV) like the standard Microsoft Media Center remote.  That said, because it is built into the chassis, replacing it with a different receiver is much less difficult than it would be to install one were it not provided.  So while it would preferable for it to just work it is hard to complain too much given the otherwise excellent build quality of the case and its relative pricing. 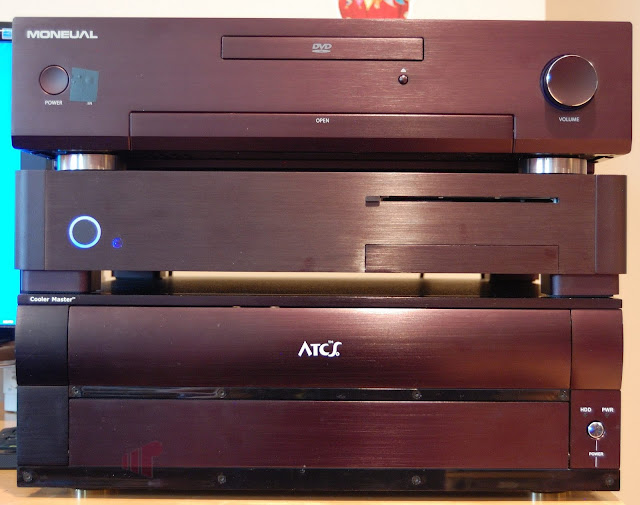 Before moving on to the builds, a quick height comparison between the Wesena E5 and two other similar cases; the low-profile Moneual 312 (top) and a full-height Cooler Master ATC-620 (bottom) is provided above.

A Micro-ATX motherboard was used in the first HTPC build completed in the Wesena E5, but there was an issue encountered that strengthened the sentiment noted earlier that Mini-ITX made more sense given the other constraints of the enclosure.  As we can see from the photo above, the power/SATA cable for the optical drive occupies the same space as the picoPSU making full insertion unhealthy for the drive.  This issue will not be universal, as there is some variance in where the power connector is located on different motherboards and most likely, this issue would be not encountered with a Flex-ATX PSU because the 24-pin power connector is identical to those found on standard ATX, and therefore flexible enough to bend around; but with the limited added value of selecting a Micro-ATX board already noted, it was wiser to focus on more productive scenarios.

Compared to Micro-ATX, Mini-ITX is almost palatial — which nets positive and negative effects.  On the plus side there is generally plenty of finger room and space to assemble everything comfortably, even providing a convenient location to place the external AC/DC converter if desired.  On the other hand most Mini-ITX accessories are not designed with that much space in mind so extension cables may be required as they were for both of the boards used here.  The DH61AH needed SATA “Y” connectors to reach the hard drives, and an extra P4 cable was purchased to connect the PSU to the external plug for the DH67CF.  Overall, this is a minor nitpick however as it is quite common when opting for a smaller board in a standard size chassis.  That said, given the trade-offs involved versus Micro-ATX it would have been better to design strictly for the Mini-ITX form factor especially if by doing so it were possible to use a standard size optical drive (maybe by moving the hard drives to the where current optical mount is found and placing the it where the hard drives were located) as the slim, slot loading models required by this case are more expensive and difficult to shop comparatively.

One additional issue that was specific to the DH67CF and the picoPSU (i.e. it probably would not be an issue with a flex-ATX PSU) was that the one of the fans was located too close to its 24-pin ATX power connector with one 12V accessory cable in use, and both when two where required.  Removing them was easy, and they proved unnecessary to keep the system cooled properly (we will look at the numbers later) so it was not a significant loss, but would have helped drop the PCH, and perhaps the CPU, temperature if they were present.

Wesena lists the fans as silent and when driven by the motherboard’s three pin header (5V) they are, but when driven via the four pin (12V) Molex (both connectors are available), this is no longer true as they become audible even from a few feet away.  The sound in this scenario is not necessarily objectionable however, as it is mostly just there as a noticeable whirring.  Also, the fan’s RPM was not reported when using the motherboard header to power the device.  It is possible that this is strictly an Intel motherboard issue as only that OEM’s boards were used to test the fans, but as there did not seem to be any adverse effects to the issue it was not explored in further depth. 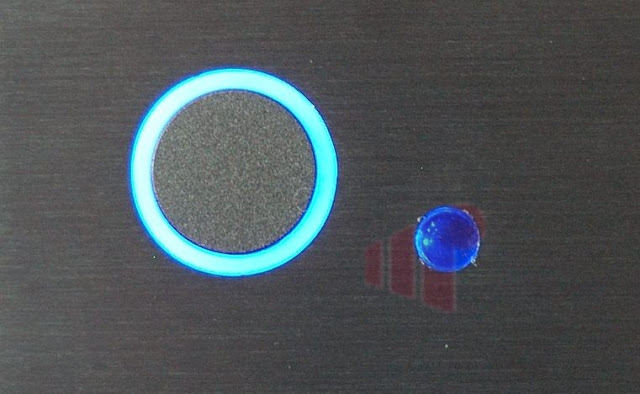 The other nitpick worth noting is that there is some light bleed from the power LED through the IR receiver (it can also be observed in the case comparison picture as well) in the case’s natural state.  Depending on your tolerance, it would be quite easy to separate the two areas with some electrical tape and fix the issue, but it did not bother me enough in practice to do anything but log it for discussion.

With the nitpicks out of the way we can focus on some of the finer points like: the optical drive tray/mount being completely flat so no shimming was required to ensure a clean install, inclusion of an aluminum PSU panel with a hole for the picoPSU keeping the look clean even on the back and the rubber hard drive mounts that do an excellent job of isolating the noise and vibration of rotational storage from the case.

In the past, our case stress tests have included graphs for typical primary HTPCuse cases like recording and simultaneously performing live commercial scanning with ShowAnalyzer, but even after twenty hours of running that test the CPUs were still in the 40-50° C range so that chart was not terribly interesting as clearly it was not enough punishment on the chassis. 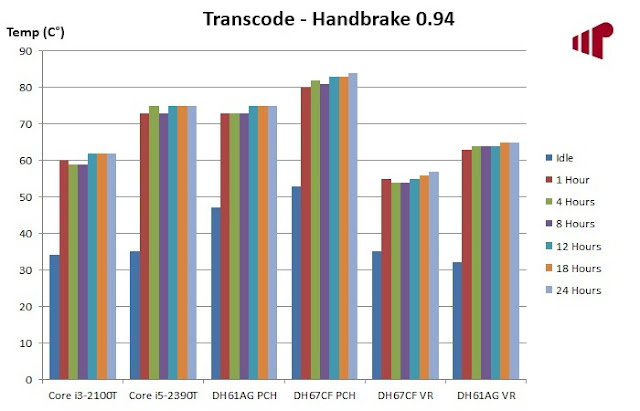 Taking a look at a 1080i AVC/AC3 to 480p MKV Handbrake transcode job configured to loop indefinitely, we can see the effect of stress on the Mini-ITX systems over a 24 hour time period using Intel Desktop Utilities (IDU) in the ~­26.94° C (80.5° F) room where testing was conducted.  Two things should be pointed out to assist in the proper evaluation of the numbers above: first in both scenarios only one of the intake fans located by the hard drive mount was in use, and second while the numbers for both system are presented comparatively, they should only be viewed as examples of what can be expected when selecting two different system and HSF cooling solutions in the Wesena E5.  With that out of the way, it should be obvious that for these systems the combination of a single intake fan, CPU HSF and the case’s natural convection is more than adequate for an extended worst case scenario. 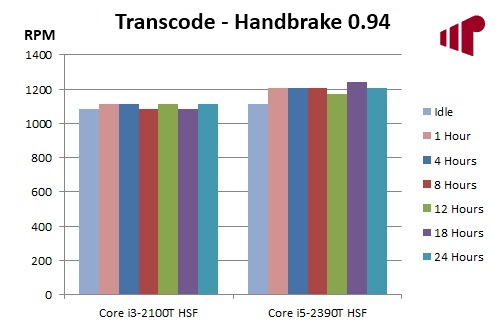 Of course the temperature numbers only tell half the story, as they would not be significant for HTPC use if the fan speed required to achieve them produced an unacceptable amount of noise.  Fortunately as we can see from the chart above that was not the case with both HSF fans remaining very well-mannered throughout.

As a primary HTPC chassis, the Wesena E5 is not completely without compromise, mostly due to its slim profile which limits expansion to just one PCI/PCIe card which makes selecting Mini-ITX over Micro-ATX easy.  The judgment regarding that trade-off versus the obvious benefits in attractiveness and CE blend in the A/V stack is a personal decision, but when coupled with the quality of materials and assembly as well as its competitive pricing ($159) the chassis delivers in spades.  There are a few areas for improvement however with the main issue being native IR compatibility with Windows Media Center and other media focused applications.

Thanks to Perfect Home Theater for providing the review sample.