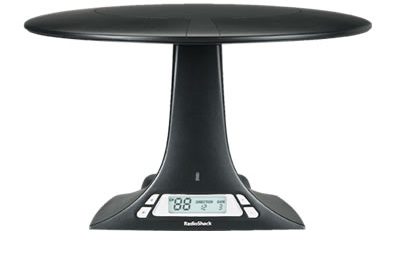 Welcome to the wonderful, ever exciting world of antennas. This is the first of potentially many articles about antennas and my experiences with them. My home is a first floor apartment in the Boston suburbs. One of the difficulties in the New England area is the prevalance of multi-path signals. Multipath is when a signal reaches an antenna by more than one route/path, so that the reciever is recieveing multiple instances of the same data. This can cause a significant amount of interference if the antenna accepts the signals and the reciever doesn't reject the additional ones. One way to deal with this is find an antenna that does a good job of multipath rejection. Directional antennas can be very good at this, since they do a poor job of reciving signals from multiple angles.

I'll start with the Radioshack 15-1892 and I'll be working my way through indoor antennas until I find one that's perfect.

Let's take a quick look at what is included. Below is a list of what should be in the box….sadly, mine did not actually have an instruction manual in the box. So I will not be commenting on the quality of the antenna's documentation. I also won't make any promises that your box will include an instruction manual either. Between the poor condition external packaging, the disorderly internal packing job and the lack of a manual, I suspect that Radioshack was selling returns as new. However, the antenna was still in perfect condition and it was the only one they had in stock so I purchased it anyways. The construction is largely plastic and of decent build quality. I do suspect though that a fall from a shelf would likely seriously damage the large disc.

Now let's take a look at how the 15-1892 performs in a real world situation. All tests were conducted using my Home Theater PC to recieve the OTA HD signals via a DVICO Fusion5HDTV Lite. The HTPC runs SageTV for tv recording and has sufficient horsepower to handle 1080i/720p MPEG-2 playback.

In my area there are 7 channels of interest to me. The broadcast towers are all just under 9 miles away and are in roughly the same direction, ranging from 228 to 235 degrees SW of my home. All channels tested are UHF, so I did not use the attached rabbit ears for VHF reception. For comparison purposes the Radioshack 15-1892 is going up against my Terk HDTVa which I already own. The Terk reliably pulls in 5 of them and is almost there on the other two, they tend to fluctuate mid-70s to low-80s but can't be relied on for a flawless broadcast. I'm hoping to snag those other two channels with the Radioshack 15-1892 and finally get to watch 24 in HD without the recording being a mess.

The Radioshack 15-1892 did not fare well in testing. As first I thought there was promise when I was able to boost the signal of my two stubborn channels consistently into the low 80s. However, it also reduced the signal reception of all of my other channels, bringing them from mid 90s/100% down to low to mid 80s also. I spent an obscene amount of time trying to carefully adjust the antenna to improve reception. I was never able to get more than one or two stations providing sufficient reception for clean playback. The antenna acts very much like I would expect an omni-directional antenna to work, even though you can adjust the direction of it's internal antenna element. There was very little difference between the different antenna orientation directions. Due to this, I don't think the antenna will do a very good job of multi-path rejection. I was also disappointed that you could not fine tune using the motorized adjustment. Instead, it has 12 preset directions. I had hoped for degree by degree control of the antenna so that you didn't have to rotate the whole antenna for fine tuning. The RF remote on the other hand performed admirably through walls and came very close to the advertised distance.

At $49.99 this antenna is ridiculously overpriced for its capabilities. It failed at the most basic task of receiving a strong reliable signal when only 9 miles from the broadcast towers. There may be some scenarios in which this antenna is an appropriate chioce for you (ie…located in the middle of a cluster of towers), but those situations will be fairly limited. The RF remote did work well and potentially a universal remote could be configured to control the antenna. This was really the only upside but was negated by the fact that rotating the antenna actually had very little impact on the the signal reception.