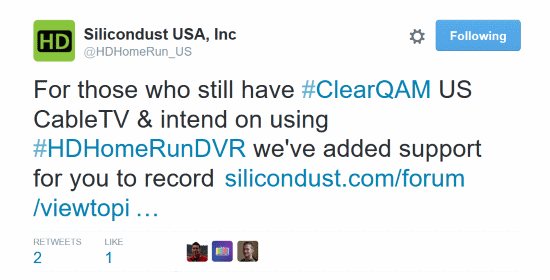 It’s an unfortunate reality in the US, that ClearQAM is slowly disappearing. But equally true, is that when it works, it is fantastic – sometimes even magical, like when HBO HD is broadcast in the clear :). So it is great that SD has added [sort of] support for the capture method in their developing HDHR DVR project.

We don’t officially support guide data with ClearQAM, however we have introduced a change to the guide matching logic to allow it to match ClearQAM channels where the channel name and channel number provided by the stream exactly match the equivalent ATSC broadcast.

If you have one or more CONNECT, EXTEND, or PRIME tuners that are set up for ClearQAM
AND
they have one or more channels where the channel name and channel number provided by the stream exactly match the equivalent ATSC broadcast
THEN
the DVR system may now use these tuners for DVR recordings.

Priority – the DVR system treats ClearQAM the same as ATSC – all other things equal the DVR system will prefer recording from ATSC/ClearQAM over CableCARD to keep CableCARD tuners available for cable-only channels.