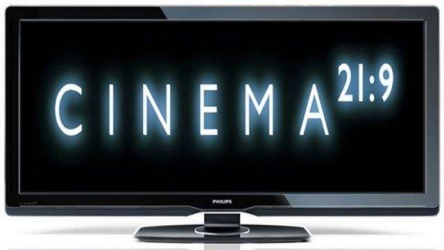 There was a brief period when I was in college when the movie studios began offering letterboxed movies on VHS. In those pre-DVD dark ages, I would routinely have to explain to my friends why the black bars on the top and bottom of the screen meant we were watching the entire movie. Fast forward a couple of decades and my TV has gotten wider, but most of the time I’m still watching a letterboxed movie because most movies are being made at an even wider aspect ratio. Cinema wide 21:9 displays were intended to provide the ultimate full-screen experience for videophiles with a screen wide enough to more closely match the proportions of the local multiplex screen. No one was under the illusion that these ultra-wide TVs would appeal to more than a small segment of the market, but according to Philips, that segment is too small to support mass production at all. As a result, Philips has discontinued their line of Cinema 21:9 TVs.

Philips’s first TV using the 21:9 aspect ratio was launched in 2009, featuring a 56-inch display. Predictably, super-widescreen units have not sold as well as more conventional 16:9 TVs, with the company noting in a statement that “the demand for this screen size is not any more on par with what we regard as basic requirement for mass production.”

There are a few other manufacturers still showing some support for the 21:9 screen ratio, as evidenced by LG’s recent announcement of a 29-inch 21:9 monitor. Admittedly, the LG EA93 is aimed at the desktop rather than the living room, but given that the difference between most computer monitors and small TVs these days is an integrated tuner, I’m sure it won’t take some enterprising soul long to put LG’s new display to work on their HTPC.

The EA93 is a 29-inch 21:9 aspect ratio ultrawidescreen (2560 x 1080) display with a thin bezel designed to immerse the viewer in the content. It can handle a 4-way split screen and connections via DVI Dual Link, DisplayPort, or HDMI with MHL support.