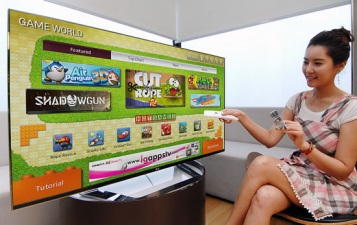 LG continues to make waves in the Smart TV arena. Earlier this week, the company announced their new Smart TV game portal called Game World. Game World will provide a central app interface for purchasing and launching free and premium games on LG Smart TVs. LG is planning on limiting the selection of games in Game World to family friendly and casual games, some of which are being designed exclusively for LG and the LG Magic Remote motion sensing remote control. In addition, some of the games will be available in 3D.

LG will initially offer games in the action, adventure, arcade, puzzle, RPG, shooter, simulation, sports, and strategy categories. The company didn’t mention any specific titles in its announcement, though the promo image suggests Air Penguin 3D, Shadowgun, Cut the Rope, Plants & Zombies, and Frisbee Forever will be part of the lineup.

The Smart TV Alliance consisting of LG and TP Vision (Philips) is still hammering away at its dream of platform-independent Smart TV apps, and as IFA 2012 gets under way it has a few new announcements. After promising Japanese manufacturers would join back in June it has welcomed Toshiba to the fold, as well as other supporters like Qualcomm, Mstar, Onigo and YuMe.