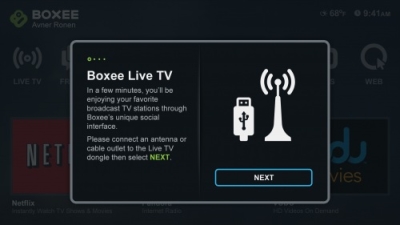 Back in February, Boxee and the Consumer Electronics Association announced that they were working together to convince the FCC not to overturn rules that required cable television service providers to offer basic tier channels unencrypted. The FCC had indicated that they were open to revisiting the rules regarding unencrypted cable channels as part of a required review of rules requiring service providers to offer both analog and digital transmissions. Cable television service providers, anticipating a relaxation of the rules requiring analog retransmission, were hoping to further streamline their digital offerings by turning on encryption for all tiers. Boxee, who had just recently released their Boxee Live TV add-on, was concerned that the move would shut them out as encryption would return cable television service to the days when every subscriber had to have a set top box all of the time.

In a filing with the FCC last week, Boxee and Comcast announced that they have come to an agreement and are working together to develop a system that would allow retail consumer electronics to access encrypted basic tier channels. Initially, the system would involve an ethernet-based digital transport adapter (E-DTA) that would sit between the set top box and the consumer electronics device. In the long term, their plan calls for a standard for an integrated E-DTA that would eliminate the need for a set top box or service provider supplied E-DTA. This does not appear to have any impact on the development of CableCard or AllVid, but would rather serve as a modern update on establishing cable-ready TVs and devices. Access for such devices would still be restricted to basic-tier channels. Although the agreement is only between Comcast and Boxee, the language does suggest that the two companies could offer the solution as an industry standard, however, without a timeline or specific details on which standards bodies would provide certification, it might be a good idea not to get one’s hopes up until other companies or organizations start to weigh in on the concept.

Boxee users may soon be able to access encrypted basic cable channels, thanks to an agreement with Comcast.

In a June 27 filing with the Federal Communications Commission, the companies said they have resolved a dispute over access to Comcast’s basic-cable tiers via devices like Boxee’s Live TV dongle.