I’ve added my initial thoughts and some screen shots, check it out via Read more below.

I’ve been e-mailing back and forth with Hauppauge support trying to get early access to the native Windows Media Center drivers.  No luck with early access but the latest e-mail stated I’d be able to download beta drivers today.

As of 4:25 pm CT no drivers are available yet but within the last 15 minutes a new "HD PVR for Windows Media Center" tab is present.  I’ll update with release notes when possible.

Update (2010-06-23): For those having issues with the channel scan staying at 0%, the issue looks to be linked to users who previously had IR32.exe and IRBlast.exe installed and did not update to the latest version.  The beta installation documentation mentioned that if you had the IR software previously installed you could skip that step.  Turns out if you had a too old of a version it was not compatible.  So if you are still having issues, install the IR software supplied with the beta, reboot the PC and run MCE setup again.

But I would hold off for a couple hours.  Hauppauge support let me know that they will be posting v28171 of the beta soon and it includes a few fixes.  An updated release notes should be available and will clarify the IR software install process.

I have had a few hours to test out the native HD PVR support for Windows Media Center and for a beta I am impressed.  This is by no means a full review but I wanted to share my initial thoughts.

To start, the setup requires more work than an average consumer expects but is relatively simple. I don’t think this is an issue with current HD PVR owners and enthusiasts.  The beta is limited to a single tuner so during the initial setup you’ll need to specify cable versus satellite. 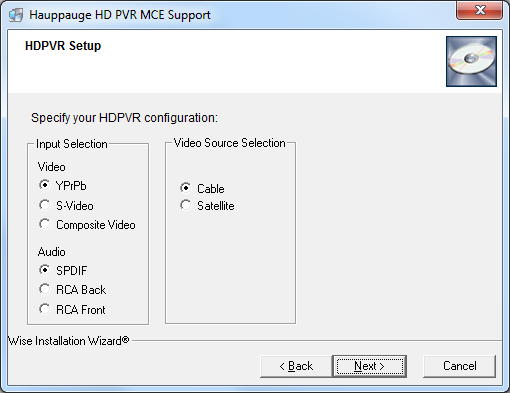 Afterwards you will need to setup the integrated HD PVR IR Blaster.  Unlike DVBLink for HDPVR, FireSTB, eHome USB IR Blaster and other custom methods are not supported for channel changing.  You are restricted to the HD PVR IR Blaster.  Note: I have currently only tested with Cable selected as the provider, options may vary for Satellite. 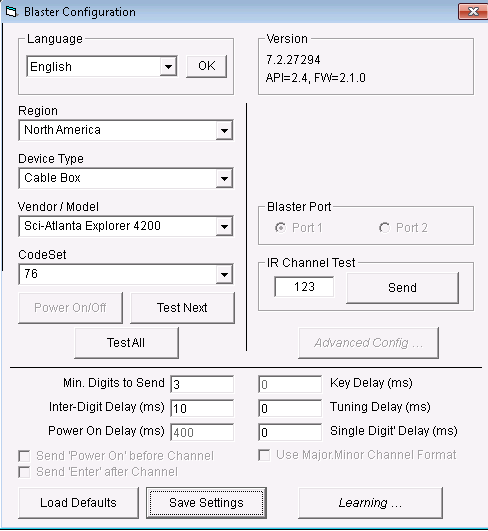 If you have not previously setup the HD PVR IR Blaster there is some trial and error involved finding the proper IR code set to be used.  The Blaster Configuration application (BlastCfg) is straight forward but can be unresponsive and feels unpolished (i.e. amateur).  A step-by-step wizard user interface would do wonders here.

Depending on your STB I highly recommend playing with the Inter-Digit Delay, the default value of 100ms is very conservative to work properly with older equipment.  I’ve found that 10ms works well and offers a significant performance increase in channel changing.  Your mileage will vary depending on your equipment.

After installing the updated drivers and configuring the HDDVR IR Blaster it was time for the Media Center drivers.  No surprises here though a reboot was required.  After rebooting make sure not to use DVBLink or TotalMedia Extreme 2 as they can prevent Media Center from being able to recognize and use the HD PVR.

Now it is time for the standard Media Center TV Setup.  If you have customized your guide be prepared to spend some time setting it up again unless you utilize Guide Tool or similar guide backup tool.  To my surprise the HDPVR comes up as a Digital Cable tuner. It does not show as a CableCard tuner and I managed to fry my ATI DCT so I can’t report much there for a couple more days.

Update: I managed to replace my fried, literally caught on fire, internal ATI Digital Cable Tuner (DCT) with an external ATI DCT. Good news, the ATI DCT is coming up as separate tuner type from the HD PVR. I am currently seeing 1- Digital Cable (CableCard); 2- Digital Cable; 3- Digital Cable (ClearQAM). In Windows Media Center 7 you are permitted four tuners per tuner type so I am assuming that means Digital Cable is considered its own tuner type. This means the HD PVR should compliment the Ceton InfiniTV 4 very nicely. I will try to round up some addition ATI DCTs (unless Ceton would be so kind to send me one) to give a definite answer. I also wrote a quick program to prioritize the TV source for channels with multiple sources: 1- ClearQAM; 2- CableCard; 3- HD PVR. This helps ensure the HD PVR is reserved for my premium channels, where it counts, and for DRM-free archives. 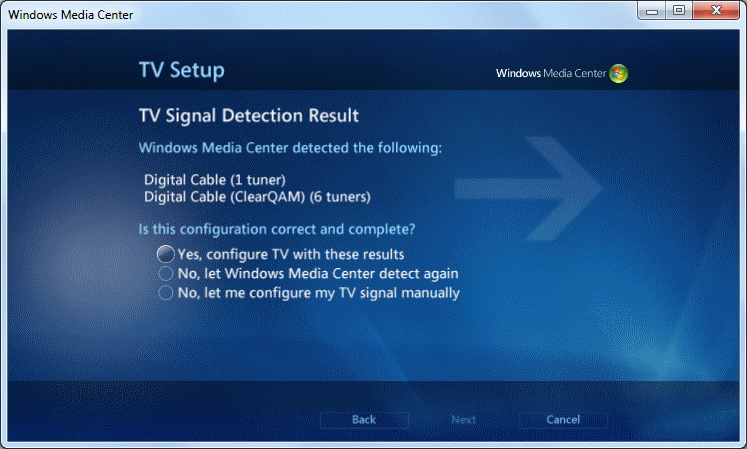 If you haven’t already done so, now is a good time to read the Release Notes.  The TV Channel Scan can take a long time and may even hang.   On my Intel i5-670 system the channel scan took over 10 minutes.  Do not be alarmed if the HD PVR status light stays off and the channel on your STB is not changing.  From my observations it appears that the TV Channel Scan does not actually check each channel, although I could be wrong.

Note: Several users have reported issues with the initial TV Channel Scan.  I was lucky and mine went through on the first attempt.  My recommendation: Be patient and if you have background services running (i.e. ShowAnalyzer, Yammm, …), stop them for the duration of the initial setup. 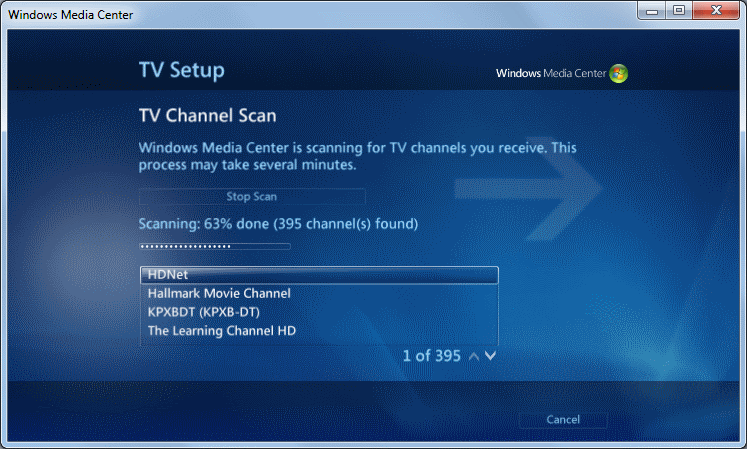 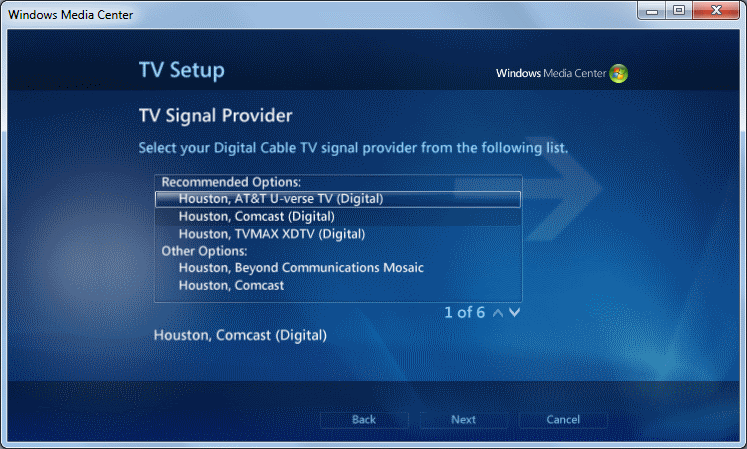 Let me know what you think and if you have any questions I will answer if possible.  Overall I’m very happy, especially for a beta.  DVBLink filled a huge gap and still offers some improvements but native drivers and guide management are welcome additions, not to mention the cost savings for new customers.  The last two fight nights at my house I’ve had to connect the Comcast STB directly to the TV due to last minute DVBLink crashes but am now looking forward to the next to see what happens.  Hopefully we will have non-beta drivers…and Mayweather v Pacquiao by then.

Final thought…I never had my HD PVR in what I’d consider a stable state when using DVBLink for HDPVR on Windows 7 x86-64, constant audio dropouts and having to restart Media Center fairly frequently when utilizing the HD PVR.  I have only used the native drivers for a few hours so it is hard to say how stable they really are but my SAF has gone up already. 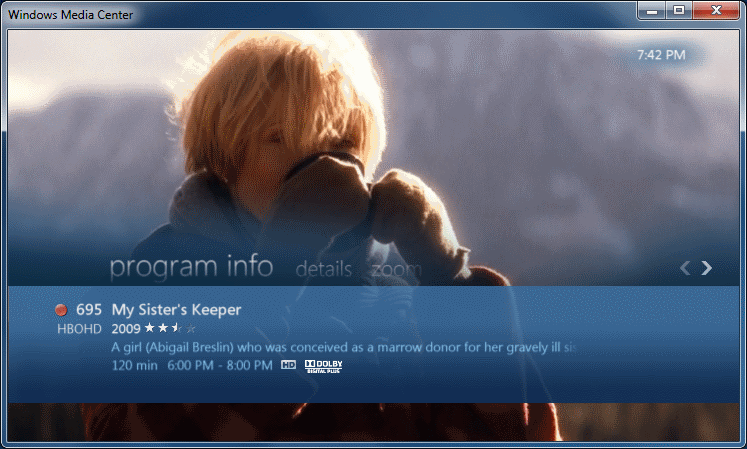 So today’s testing did not go quite as well as yesterday. I’ve encountered what appears to be a bug in the beta drivers. While recording a channel serviced by the HD PVR and attempting to change the channel to another channel serviced by the HD PVR I’d expect to be prompted on what to do. Whether or not to cancel the current recording to free the tuner. No such luck. Instead I get the all too familiar black screen followed by system instability and eventually the Media Center has crashed dialog.

I did some digging and turns out the "Hauppauge HD PVR Software Tuner" is listed twice as a channel source for roughly half of my channels. Seems reasonable to assume the crash I was experiencing was due some type of deadlock while attempting to simultaneously utilize the HD PVR on multiple channels. After disabling the duplicate channel source things are back to normal. I’m prompted what to do and no crashes.

If you have had a chance to install the beta driver, spot check your channel sources. Let us know if you are seeing double as well. 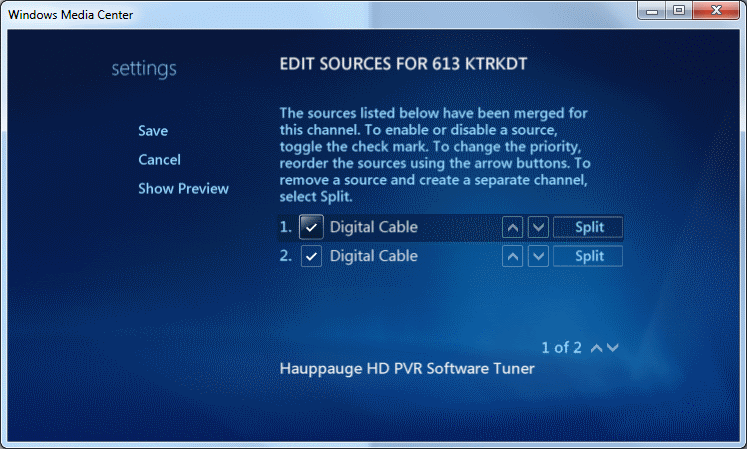 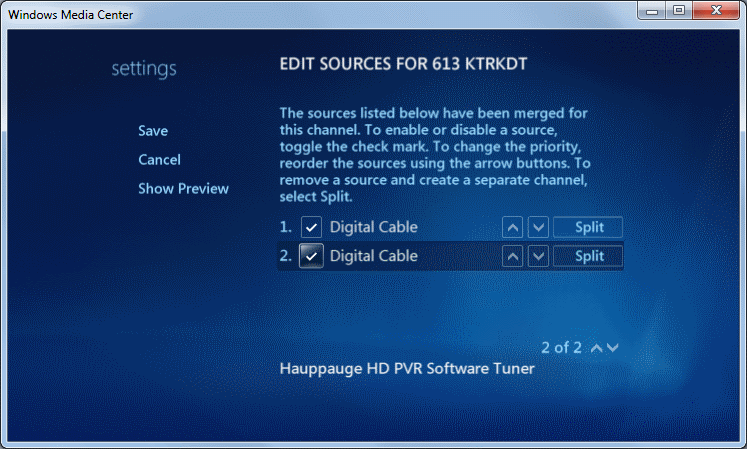 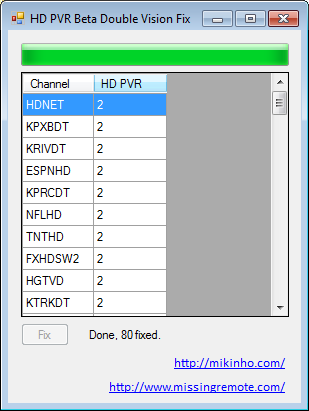