Continuing our series of Beginner’s Guides for HTPC and Home Theater, this guide offers ten basic tips for getting your HTPC up and running smoothly.  Most of these were learned the hard way, hope that sharing means you don’t have to 🙂

Recording and scanning big TV files for commercials hits a drive really hard. Having at least two physical drives separates the bandwidth necessary to keep the user interface (UI) responsive and minimize the risk for glitches during recording and playback.  After adding up all the traffic caused by Media Center recording and ShowAnalyzer reading back and forth in the file while you try to watch it (all potentially multiplied by the number of tuners); then add in a couple “extenders” – you’ll be glad you put the operating system (OS) on one disk and recordings on another.

I’m sure there will be some disagreement on this one so it is important to understand context. If you only want to store DVDs and other “light” media a green drive will work fine.  That said, I’ve had horrible results streaming really “heavy” (20GB+)  files off of them; both locally and over the network especially in multi-user (i.e. two clients hitting the same drive at the same time) scenarios.  Green drives are cheaper, quieter and use less power (what makes them “Green”) because they are slower, but they are not much cheaper, quieter or greener than a 7200RPM that will serve those heavy files without glitches. 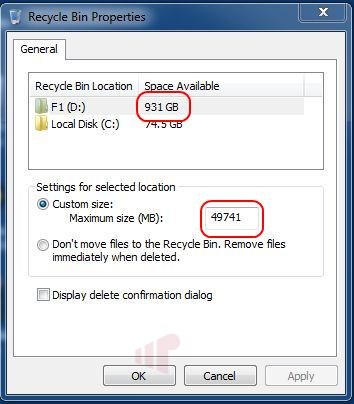 By default Windows wastes a big chunk of space for the Recycle Bin; almost 50GB on a 1TB drive.  Since you’re only using your big drives for recording or storing large files, the bin isn’t going to get much use.  Why not free that space up for a few more hours of HD. 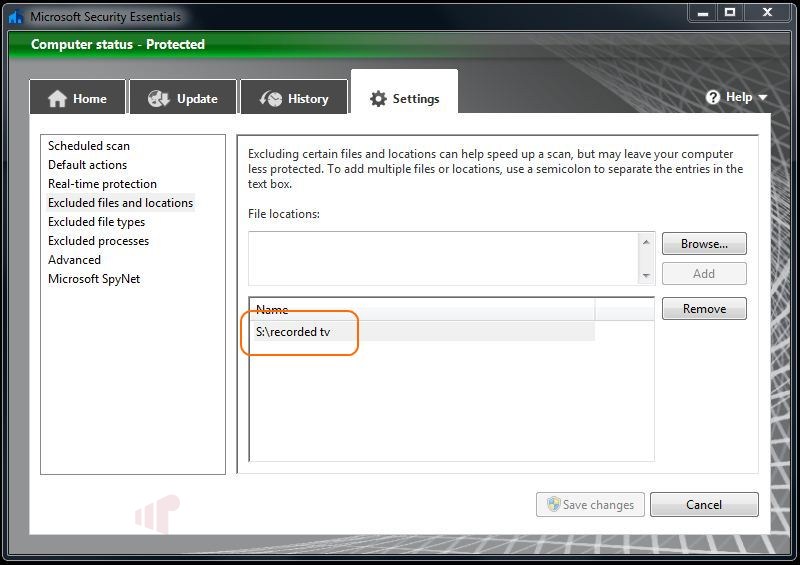 Some argue that an HTPC doesn’t need AV, but I think every PC should have it just in case.  That said, it doesn’t mean you need to scan that 12GB recording of “American Idol” every time it hits and leaves the disk.  If you have #1 down go ahead and exclude the whole drive, otherwise just add the folder.

5. Use a Uninterrupted Power Supply (UPS):

If you’ve used a PC long enough, you know that someday the power will go out, and that will do bad, bad things to your HTPC.  A UPS not only gives you some breathing room for short dips and drops, but most can hibernate or shut down the PC cleanly after a few minutes of power loss.  They are an easy thing to forget, and good ones aren’t cheap – but neither is replacing the hard drive (or the files on it) when yours “parks” prematurely.

If you only have one HTPC connected to a single TV you can skip this one, but anyone with two or more needs to keep reading.  That router you grabbed from the clearance bin at Fry’s isn’t going to play nice with the Blu-ray rips streaming around the house.  Many mid-to-high end consumer routers have good built-in switches, but I prefer adding a dedicated 1Gb switch with decent spec’s (large memory buffer, jumbo frame support, etc.) to isolate media traffic from the rest.  Having decent hardware is even more important if devices on the network operate at different speeds (PC at 1Gb, extenders at 100Mb); where features like flow control can make a huge difference.

7. Get Some Active Power Factor Correction (PFC) In The Power Supply Unit (PSU):

Active PFC keeps the supply of electricity more constant while also increasing efficiency (got to get that green back somewhere :)).  PSUs with active PFC are a bit more expensive, but it’s well worth it – your components will thank you. Newer power supplies have begun using the logo of “80+” to signify that they are at a minimum 80% efficient power supplies, which is a good place to start. Don’t underestimate the importance of spending a bit more on the power supply either.  Just like the router, a $20 PSU is very appealing until it destroys everything (and they smell really bad when they burn up).

I’ve found the sweet spot on an HTPC to be somewhere between two and four GB.  Most modern systems are dual-channel so you’re best off running a matched DIMM kit (2x1GB or 2x2GB).  RAM is cheap, and we all know x64 is the future, so even though you can’t use .7GB of the four on x86 I always buy 4GB kits – it will be there when x64 can finally make its case ;).  RAM speed is somewhat important, but it is critical to know what your system supports and how forgiving it is when it comes to voltage.  Many mainstream systems max out at DDR3-1333, so in that case paying more for some DDR3-1666 memory probably isn’t going to improve your HTPC-performance, and can cause compatibly issues if the vendor requires out-of-spec voltage (more that 1.5V) to get the extra speed.  The jury’s still out on how useful heat spreaders are for mainstream RAM; my viewpoint is as long as they are reasonably sized (so they don’t cause installation issues) it can’t hurt.

If the HTPC is out in the open, get a nice wireless one (Editor’s Note: Dinovo Mini is the best if you can afford it).  As much as we like to pretend that the HTPC is a piece of CE kit, it’s not (our secret) – so that keyboard will get some use from time to time.  Spend a couple bucks to make it convenient; sitting on the floor with a wired keyboard puts a wicked kink in the neck. That said, know your surroundings–if you know your dog or child is going to destroy it, don’t spend $100 on one.  There are plenty of effective, albeit less exotic, $40 keyboards out there to do the job.

10. Your HTPC Is Not An Investment:

Electronics are not investments – approach your depreciating asset from the right perspective.  Think about how much more you can do with a modern HTPC compared to one that is even two years old.  Unfortunately, HTPCs depreciate faster than most CE devices, like a TV, buying at the middle makes it easier to replace parts more frequently.