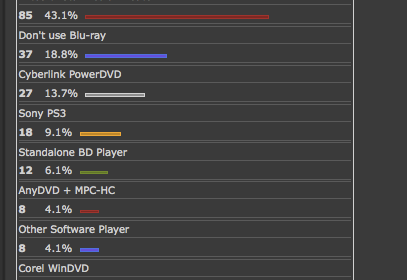 First off, thanks to the 197 people who participated in last week’s poll, asking the question of "What is your primary Blu-ray playback software or hardware." It was said after our last poll on HTPC software, that our members are somewhat skewed based on the content MissingRemote caters to, but the numbers here seem pretty understandable.

We show 15% of users either using the Playstation 3 or other standalone Blu-ray hardware player, which is about what I would expect simply given their cost. This is countered by 19% of respondants who have yet to hop on to the Blu-ray bandwagon. I think an appropriate follow up question to those folks would be what’s stopping them–is it the financial barrier to entry, their quality of TV, or just that they don’t see the overall value to justify the overall increased cost of ownership?

For the HTPC crowd, the results were honestly what I expect with Arcsoft dominating the polls with just over 43% of the tally, and Cyberlink and WinDVD accounting for less than 15%. While I’ve heard some positive things about Cyberlink recently, and their new software really has done a wonderful job of improving, Arcsoft really gained ground on them and quickly has taken over. Given their support of BDMV (ripped Blu-ray) which is definitely a geek format for storing movies, Arcsoft has that market completely cornered as Cyberlink does not support BDMV.

The other results combined for less than 10% of the vote, and my guess given our previous poll is that these are probably SageTV users utilizing the built-in playback abilities of it–which I was not aware of but have since been educated.

Overall, hope you enjoyed the poll as much as I have enjoyed the results. We won’t always run a poll, but if you have a poll you’d like to see, definitely let us know and we would be happy to ask the audience. This week up we have a question on Calibrating your Television, so make sure to check to the right and answer!