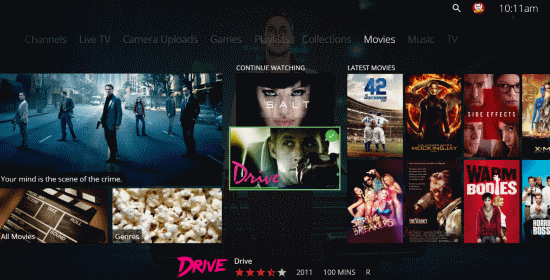 I’m a big fan of Emby. The server does a great job of cataloging my media, and exposing my TV content/EPG out to the web and every type of device (even Windows Phone/Mobile ;)). The team has been working really hard on a new version of Emby Theater that ditches the old WPF architechture going for a slick and modern UI built with HTML5. Which means it looks great in modern browsers (Chrome, FireFox, & Edge) and in the new Electron based Windows Client. While the UI is the same web/Windows, the playback framework is not. The Windows player uses the same DirectShow based player that the legacy MBT app relied on.

A Modern App for Modern Times

The interface for this app has been built with HTML, but this is nothing like the web apps you’re accustomed to. This has been built purely with modern features that bring a level of performance that wasn’t even possible a year ago at this time. For the nerds out there, that means WebAnimations, WebComponents, Service Workers, Polymer, and on and on.

To run this app on Windows, we’ve utilized Chromium, Electron, and NodeJS. Then we replaced the web audio and video player with a player built specifically for Windows (mentioned above). With HTML and JavaScript as the basis, the possibilities are going to be endless.

To release the app on other platforms such as Linux, Mac or Android, we would follow the same process and provide you with the best audio and video players that the platforms have to offer.