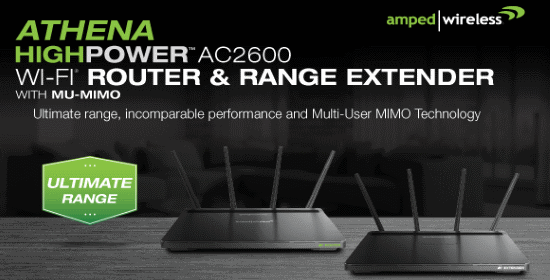 It’s unclear to me what’s different between the router and Amped Wireless’s earlier AC2600 device, but it’s great that they now have an AC2600 extender and the price of both is pretty compelling.

The new and improved ATHENA-R2 Router is ideal for homes that harbor multiple devices all reaching for the same Wi-Fi connection. Traditional routers stream data to just one device at a time, leaving the rest of the devices to wait their turn which results in slower downloads and video buffering. The new ATHENA-R2 is able to stream high quality data at faster speeds to up to four devices at once, delivering quadrupled speeds for multiple devices. It is designed to provide reliable, whole-home connections with four high gain antennas and 16 high power amplifiers. With both a USB 2.0 and USB 3.0 port, the ATHENA-R2, High Power AC2600 Wi-Fi Router is equipped for high speed, local file sharing powered by Paragon Software and is built with four gigabit wired ports to directly connect other devices like PCs and Smart TVs.

The only range extender of its kind, the ATHENA-EX, is the first High Power AC2600 Wi-Fi Range Extender. It features four high gain antennas and 16 high power amplifiers and is capable of extending the range of any Wi-Fi router by up to 15,000 square feet. It eliminates Wi-Fi dead spots and packs enough power to blanket more than just the home or office. The ATHENA-EX is also the first Wi-Fi extender to feature Multi-User MIMO technology to provide the best performance for multi-device households. Paired with Amped Wireless’ award winning High Power Technology, the ATHENA-EX delivers unparalleled connection reliability, range and performance. Every smartphone, tablet, computer and TV can connect from virtually anywhere in the home or office and at blazing-fast AC2600 speeds. The Extender also houses five gigabit wired ports to bridge in any wired network devices like printers, PCs and gaming consoles. The two USB storage ports also allow for fast file sharing within the network.

Amped Wireless will be talking to press and showcasing their latest innovations at tonight’s Digital Experience! event by Pepcom, at the Mirage Events Center in Las Vegas from 7pm-10:30pm. Amped Wireless will also be showcasing the ATHENA line along with its full line of new products for 2016 at Booth #35842 in South Hall 4 during the 2016 Consumer Electronics Show in Las Vegas. For press meeting requests please email: [email protected] or call Lacey Limbrick at 909-217-3229 x 152.

The ATHENA-R2 is affordably priced at $239.99 and the ATHENA-EX at $219.99. Both units will be available for order at ampedwireless.com towards the end of Q1.