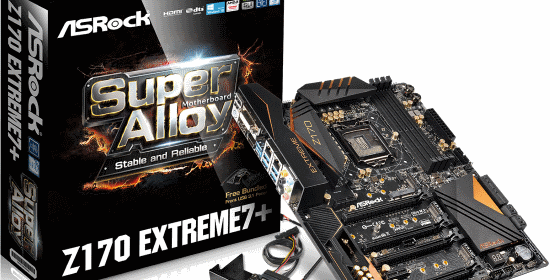 $240 is a lot to pay for a consumer level motherboard, but the brain melting amount of I/O throughput available from three M.2 x4 RAID SSDs would make for an amazing server. Have to wonder though, outside of server user (VHD, database, etc.) where would the consumer space benefit from that much throughput? Yes, most computing is I/O limited now, but is it THAT I/O limited?

When we first analyzed the Z170 chipset from Intel, we were pleased to see that it offered 26 high speed input/output ports, which included 20 PCIe 3.0 lanes and support for up to three PCIe storage devices in RAID. Although there are some limitations with the PCIe lanes (networking is limited to five specific lanes), this development opened up the landscape for motherboard manufacturers to develop interesting products and stretch their engineering muscle. In typical fashion, ASRock has gone straight in the deep end and taken like a duck to water with this Z170 Extreme7+. For $240 it offers three M.2 ports, all capable of PCIe 3.0 x4 and with RAID in mind, as well as some other interesting add-ons for USB 3.1.