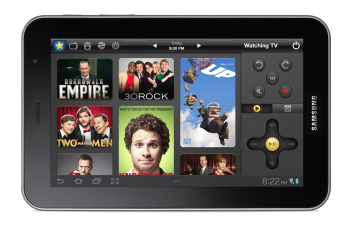 As smartphones and tablets have come to be defined by the apps they run, one of the more surprisingly popular type of apps has been remote control apps. Most such apps are device specific, but a few companies have stepped up to try to create a new class of universal remote controls with their apps. One such company is Peel with their Peel Smart Remote. We reviewed the Peel Smart Review a few months ago. In our case, we used an iPhone 4S to run the app and to interact with the Peel Smart Remote hardware, a small Wi-Fi to IR converter device that the app communicates with. Recently, Peel teamed up with Samsung to bring their app to the Galaxy Tab 7.0 Plus, Samsung latest tablet. This is an intriguing combination because the new Galaxy Tab has a built-in IR emitter, making the Peel hardware unnecessary. Given the price of some high-end remotes, a $399 tablet devoted to running one’s living room isn’t completely out of the question, particularly given all of the extra functionality that a tablet brings to the table, assuming that the tablet and app work as advertised.

Well, Peel has now teamed up with Samsung to provide an integrated solution for the Samsung Galaxy Tab 7.0 Plus tablet. Because the Samsung tablet has built-in IR capabilities, there’s no need for the add-on converter box. Peel sent me a sample of the WiFi-only Galaxy Tab 7.0 Plus ($399.99) to try out the Smart Remote system, and I took the opportunity to explore the tablet, as well.