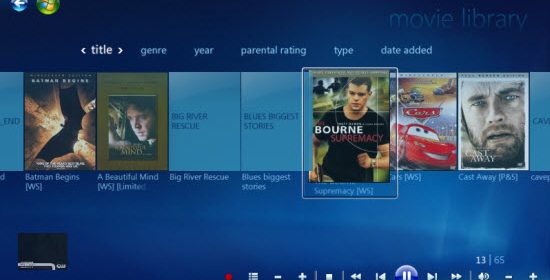 Everyone and their dog has had a chance to donwload Windows 7 beta. For various reasons including promises of fame, fortune, performance and a few crazy folks like us are trying out the Media Center portion of W7MC. I have had a few weeks to play with Media Center with most of my use focusing around Music, Movies & TV’s. Here is the good and bad of Microsoft’s Vista Redu. Enjoy the pictorial and video fun of W7.

Improved mini-guide – I absolutely love it. This is how all mini-guides should be, one show at a time is near useless.

Hit the read more button to continue this fine saga.

Movie Library – A nice improvement and separates home videos
versus DVD’s. It is no third party product but with the improved CODEC
support and DVD XMLs from DVDxml.com, it is very functional.

QAM Setup – The QAM setup was pretty easy in my opinion if not a
bit dumbed down. On the initial setup, I only got the ATSC channels and
was required to go back through and add a few more channels it found
and remap them to the proper listings. It was very painless. 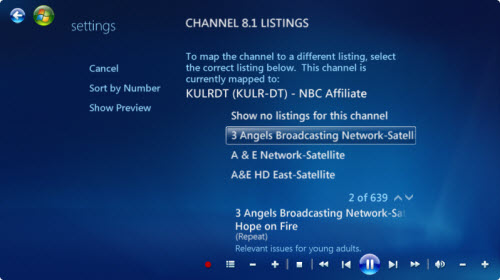 Virtual Channels – This is a very solid addition to the EPG that
allows for a level of integration to online content. I envision future
channels from various networks, podcasts etc. Over all the level of
integration with Internet Video is a big plus and proves that the media
center platform is viable for online media. 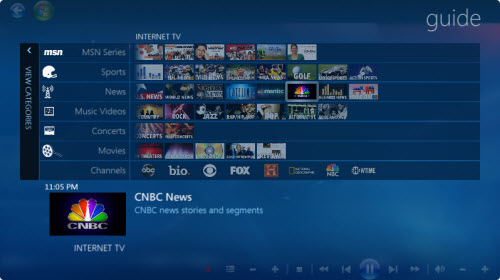 New "Details" screen – The new details screen adds a bit of the
workflow design concept to the Media Center UI. Though not
revolutionary it does make for less mouse clicks to navigate various
actions. 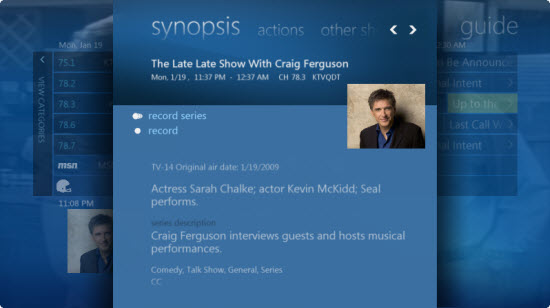 Netflix & Online Services – The 3rd party programs have this
covered, but we really really want a native solution that consistently
works with extenders. It would be GREAT to have two or three virtual
channels including Netflix, Amazon, Cinemanow for W7 launch.

Recommendation Engine – No recommendation or integrated marketplace yet. Lets bring some of the Zune love over here.

No Zune Integration –  The navigation for the music library is
great, however I would love to see more of Zune’s Marketplace features
make it to the Media Center.

Softsled – They sure are dancing around the issue with Windows
7. They offer pretty damn near equivalent to softsled but stop short
with live TV. On the flipside, the Play To feature appears to be a nice
addition.

Zoom – Most users have a mix of HD and SD content. It would be nice if you could assign zoom based on channel or HD flag.

Channel Logos – No channel logos as of yet. I know it is a
licensing issue but they could let the user add it into the EPG in the
edit channel portion of the setup

Native Blu-ray support – Windows has partnered with PowerDVD to
offer support in W7. No word if it will be a clumsy plugin like Vista
Media Center or true integrated support.

Complete Lack of Customization – I am quite sure Microsoft will never let this happen but it would be nice to create your own strip and add icons.

Supported TV Sources – Nothing has been confirmed since the death of DirectTV but by the time Windows 7 launches we might see Dish support and HD PVR support
. Lets see what happens, but by simply having HD PVR support that
should open Media Center up to any TV source. The new driver
architecture should make life easier in getting these solutions out the
door. I hope to see CableCards for non-oem PCs as well :).

W7 Media Center is a nice incremental step above the last two iterations of the Media Center family. Nothing revolutionary here but it is safe to say that the UI (music wall, program info etc) certainly looks better without sacrificing functionality of the program. The compelling reason to upgrade will be the improved CODEC support (w/ transcoding) and the great new mini-guide.

No HTPC software is perfect and it’s not hard to see where Microsoft needs to focus. If they can pull of a one or two content deals by launch with proper integration, that will go ALONG ways in quieting the nay sayers. Oh and BTW, the Extras Library? It stinks. Please integrate the services like the virtual channels. Beyond that, we would all like to see Media Center compatible with as many TV sources as possible.

Before launch I would like to see more online content mentioned above, HD PVR support and Dish support.AS well, I would like Microsoft to launch some sort of 3rd party plugin dev initiative. Various ideas are running through my head like cash prizes for plugin dev contest, an application store accessible from the Media Center interface (remember MAID?), and working with community sites (*ahem*).

Do keep in mind this is beta software, so keep your panties from knotting up too much :).