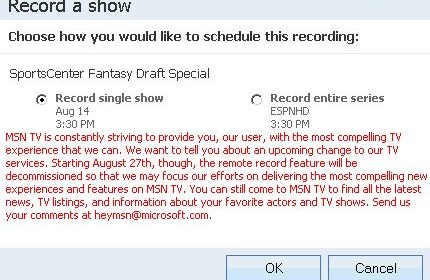 Remote Record has always seemed to play second fiddle to Webguide, simply due to it’s lack of features. But if there is one thing it dominated, was simplicity. No port forwarding, no configuring…and FAST since it relied on MSN’s web server instead of using your PC as a server. If you needed quick scheduling of a show or series, Remote Record was the answer. And best of all, it was free.

So imagine my dissapointment today when I saw the following announcement:

This is dissapointing on SO many levels. First, this is a terrible time to lose ANY Microsoft offered plugins–with all the negative publicity surrounding the various Online Spotlight applications which have mysteriously and without warning dissapeared–the last thing Media Center needs is a useful tool like Remote Record biting the dust (especially as it was offered by Microsoft itself). Secondly, the only comparable replacement is Webguide, but since Webguide is now controlled by Microsoft, its future is just as clouded (I’m praying it does not follow the Yahoo! Meedio fiasco). Add to all this the fact that the upcoming TV Pack Update will most likely break Webguide anyways, and Microsoft has now singlehandedly taken away all abilities to remotely schedule shows for your Media Center; a feature which has been around since the beginning.

I have no idea what’s the plan, but I must believe there was a better way to go about this. Especially for a division as large as MSN TV, the bandwidth for this app must have been minimal. Even if they are developing a replacement, why not keep Remote Record alive on a backup server somewhere until it’s ready. It’s the type of feature which everyone takes for granted, until you are at work all day and realize that the season premiere of LOST is on tonight!