Keep this case in mind if you’re looking to build an ATX based HTPC and want to keep the price of the case down. Hardware Canucks The nMedia Home Theatre PC 600BAR is a compact enclosure which is destined not for the desk but for your cozy little den or in the midst of your high tech home threatre setup. […]

END_OF_DOCUMENT_TOKEN_TO_BE_REPLACED

Christie has just announced the release of a new DLP projector. The HD405 is another full HD (1920 x 1080) resolution projector. This dual lamp can give 4100 ANSI lumens on its highest setting. About Projecotr It also features a 7500:1 contrast ratio and comes with a variety of connections including DVI, HD15, BNC, and HDMI. The projector also has […]

END_OF_DOCUMENT_TOKEN_TO_BE_REPLACED 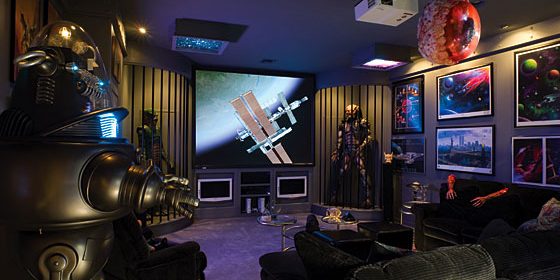 This tribute to Sci-Fi may not be the biggest home theater, but the animatronics will have you jumping out of your seat – literally. Electronic House So with a little web research and the help of his wife and Scott Messenger of Austin, TX installation firm Escom, he created this hellish home theater. Winn’s theater certainly isn’t one of the […]

END_OF_DOCUMENT_TOKEN_TO_BE_REPLACED

The new D-ILA projector from JVC is reviewed and promptly receives the editor’s choice award. Projector Central The DLA-RS2 — A Projector for the Videophile The DLA-RS2 is priced somewhat higher than the other 1080p models we’ve been reviewing this fall. The target market for this model is clearly the purist videophile who wishes to spend more than the typical […]

END_OF_DOCUMENT_TOKEN_TO_BE_REPLACED

A review of the PT-AE2000, translated from German. This review also covers the construction and includes images of the disassembled parts. It also mentions the benefits for gamers of the Panny’s ‘very fast’ mode that reduces delay. Very thorough. (The translation stopped after paragraph 3.4.5. The quote was manually enhanced for easier reading.) Cine4home Panasonic pursued this year a similar […]