As interesting as the third generation of Intel Core integrated processor graphics (IPG) were when they arrived in April, as home theater PC (HTPC) enthusiasts it was disappointing that the more applicable two core/four thread models were not available. We gleaned what we could about the minor processing improvements and major changes to the graphic processing unit (GPU) from the Core i7-3770K / Core i7-3770S, but as those were overkill for this space there are still many unanswered questions around how the six execution unit (EU) HD 2500 compares to sixteen EU HD 4000 and, perhaps more importantly, how 22nm Ivy Bridge (IVB) CPUs compare against the previous generation of Sandy Bridge (SNB) IPG with similar power requirements. To achieve these goals two 3.3 GHz, 55W Core i3s were tested; with only the GPU separating them – at least on the specifications sheet – let’s dig into the Intel Core i3-3220 and Intel Core i3-3225 and find out which is the better option for your next HTPC.

It was not surprising that visually there is no way to tell the two 55W IVBs apart. The same could not be said for the heat sink and fans (HSF) that came with the IPGs though, with the Intel Core i3-3225’s bent fin design offering more surface area compared to the straight fin design of the other CPU; although both lacked the copper core found on Intel retail i5/i7 coolers. They also differed in operation, with the Intel Core i3-3220’s buzzing loudly on startup before matching the inaudible noise level of the other HSF – even under load. So where I usually recommend replacing the stock HSF in an HTPC build these are worth trying before swapping in a 3rd party device.

Where there is no visible difference between the two, the Intel Core i3-3225’s last digit indicates that it boasts a GPU with 2.67x the processing capability of its HD 2500 endowed sibling. Otherwise nothing else divides the two CPUs on paper–including the lack of some business-centric features like TXT, VT-d & AES-NI.

Given the similarity, the Windows Experience Index (WEI) scores only reinforced the difference. Interestingly though, when digging a bit deeper a more complex relationship came to the surface. 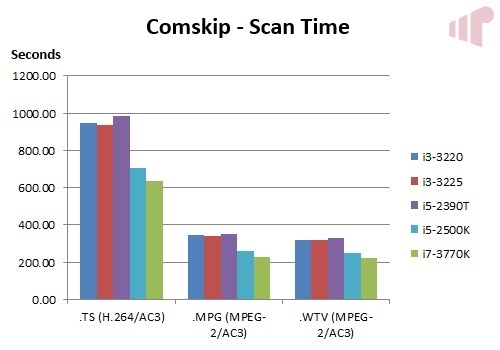 Because of its lightly threaded design Comskip (a program used to detect commercials in TV recordings) is not as good at stressing a multi-core system as ShowAnalyzer, but as that program is no longer under active development it felt like the right time to move on here, just as most enthusiasts have with their HTPC. A couple interesting artifacts emerge from this test: the first is that although clocked identically, the i3-3225 demonstrated a slight advantage in speed (lower is better) and second both of the 3.3GHz 3rd Generation Core i3s were slightly quicker than the two core/four thread 2.7-3.5GHz SNB Core i5-2390T. 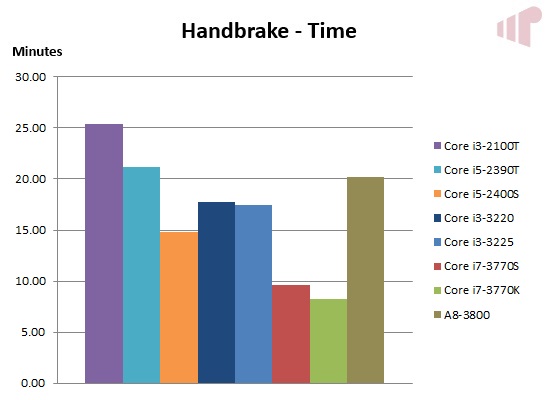 Handbrake, a popular transcoding application, supports multi-threading very well so it is easy to note the clear advantage as core count increases on Intel CPUs, but even with twice the physical cores our aging AMD A8-3800 is slower than the pair of i3s. Interestingly the i3-3225 also enjoys a slight advantage against the i3-3220 in this test as well, and with more a more heavily threaded workload the i5-2390T is not able to Turbo Boost as frequently so it runs closer to the base frequency widening the gap in performance. 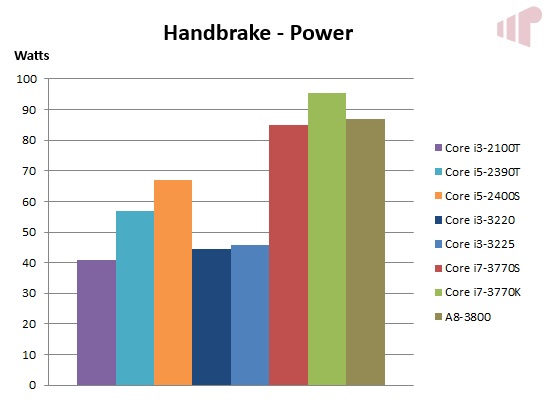 While hardly surprising that the 2nd generation Core i5-2390T is slower than the 3.3GHz IVB i3s, it was that they required less power than the 45W IPG while outrunning it; 22% for the i3-3220 and 20% for the i3-3225. Which highlights another interesting point, the i3-3225’s slight CPU performance advantage is paid in power consumption.

Turning to ArcSoft MediaConverter 7, we can see that both of these findings are reinforced further with the i3-3225 chalking up slightly better CPU performance and slightly worse power consumption. 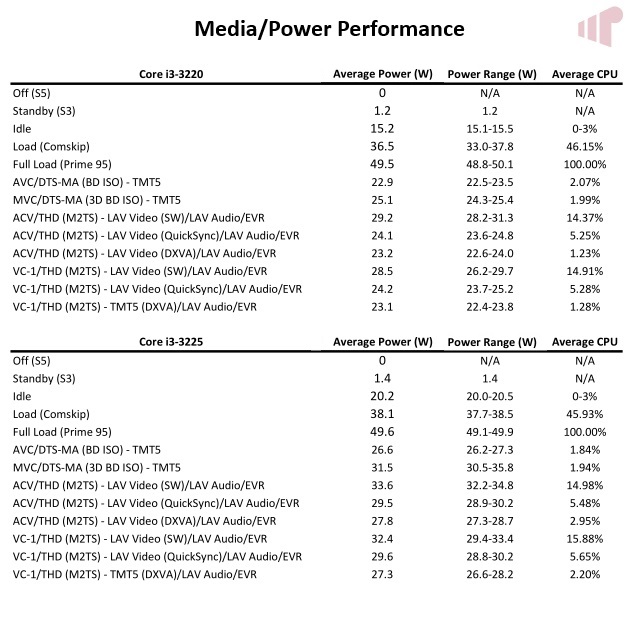 Taking a closer look at the relationship between utilization and power consumption we can see that at full CPU load (Prime95), the two IPGs consume about the same amount of power at the wall, but given the slightly wider power range it appears that the i3-3220 is more aggressive about throttling down. This is also reinforced by looking at consumption at idle, with a 5.1W difference noted on average. I was quite surprised by this finding so I reinstalled the OS and tested both CPUs again, as well as confirming the trend in a DH77DF motherboard. 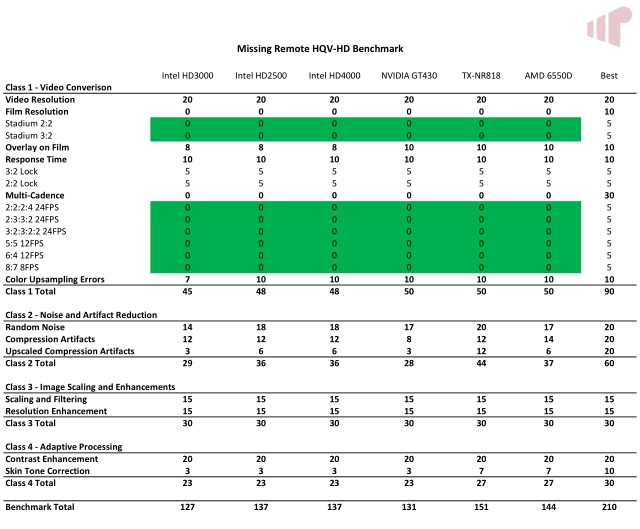 Intel HD Graphics offloads video processing duties to specialized fixed function hardware so for players that utilize that feature (like commercial Blu-ray software, Windows Media Center, etc.) the results will be the same between the HD 2500 and HD 4000. Like all artificial benchmarks HQV-HD is useful in a specific context, and in this case does an excellent job of highlighting the similarities between the two IPGs capabilities. This also holds true for the other aspects of the general video performance noted in our previous coverage of Intel’s 3rd generation GPU; both on the good (e.g. video/PC level consistency) and needs work (no 0-255 output option) – there is one exception however.

While I can only guess at the root cause for the power consumption delta between the i3-3220 and i3-3225, there is a key differentiator should your HTPC need more GPU performance to utilize the madVR advanced video renderer. By observing frame dropping statistics in the two video captures above showing three video clips (480i, 720p, 1080i) rendered with default settings in madVR on both platforms it becomes clear that the HD 2500 is not up to the task when scaling is also required (480i->1080p, 720p->1080p). It should be noted that even HD 4000 cannot completely replace a discrete GPU for all of the algorithms (e.g. Jinc) or options available, which requires a mid-level card. It does however provide a viable option for IPG users who also want to leverage madVR and require competitive CPU performance.

Just reading the specifications, the winner in this comparison should be obvious–after all more is better, and for a $15 premium (street) the Core i3-3225 offers the same process, frequency, and features alongside more GPU capability than the Core i3-3220. The answer in practice is much more complex however. Where it is true that HD 4000 equipped CPU offers more, it comes at a price – power consumption. This trade-off is not unique to these IPG though, in fact it is one of the fundamental questions we have to answer when building the “perfect” HTPC – it’s just not framed as conveniently that often.

Thanks to Intel for providing the review samples.