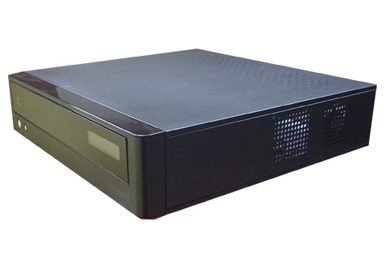 The front of the 1080P has an attractive aluminum veneer and glossy piano black plastic.  Upon initial inspection I was impressed with how nice it looks; on closer examination there are some minor build issues around the seams where the veneer was not completely attached to the plastic underneath but not visible at a reasonable distance.  Except for the back, the rest of the case is black painted steel with plenty of ventilation.  Two 80mm fans are included and mounted on the right and left sides of the case to pull air in near the hard drives and exhaust by the CPU.  It is also worth noting that the PSU is on the opposite side of the case from the usual location — for most motherboards this should not be an issue but some locate the ATX power connector on the top/left so it could be a problem.

A bag of screws, clear plastic panel for the vacuum
florescent display (VFD), manual and cable ties were included.  PCI slot covers were notably missing however,
so plan to pick some up if needed.

The case supports one external 5.25” and three internal 3.5” devices attached to a removable mount.  Now I usually think of looking at a manual as an admission of weakness — so just between us, when I could not figure out how to secure the optical (5.25”) or third hard drive I broke down and took a quick peek.  Fortunately some of the puzzle was left unsolved, only upon closer inspection of the pictures in the directions did it become apparent that holes on the bottom of the bracket were there for a reason.  Making the 1080P the first case I have ever known to bottom mount a drive – kudos :).

With the drives figured out the rest of the build was uneventful.  There was plenty of space for everything (although with three drives some attention to cable management was required) with all of the tuner cards and the low profile ATI 4650 tested all installing easily.  Given the case’s construction it was nice to see rubber grommets preinstalled for two of the hard drives and some special screws included with the case. With just the two bottom drives in place they did an excellent job isolating the case from rotational noise.

While not really an issue, neither of the included 80mm fans are standard width and I was not able to get a standard 80mm to install.  In the rear mount (shown above) the motherboard interfered with the installation; in the front while it was possible to get one in, the additional width blocked the hard drive bracket’s installation.  Fortunately the fans are very quiet so there is no need to replace them immediately, but at some point it will be a concern.

Like many budget cases the 1080P has breakaway PCI blanks and after they are gone leave behind a sharp metal stubs (circled in red).  Not much to say except “be careful”.

There is some disagreement on the value of VFDs on an HTPC (even among MissingRemote staff), but I think they are essential to completing the CE look of a case and provide valuable information about what the HTPC is doing so it was really nice to see an affordable low profile case with a VFD.  Of course the VFD is optional on the 1080P so those who feel differently do not have to pay for one, although the case looks a bit strange without it.

I had an nMEDIAPC PRO-LCD (green) and a LCD2USB (blue) 2×20 displays on hand so I installed and tested both.  The only issue was that the first row of characters was partially blocked with both displays (worse on the LCD2USB) when viewed from the left; otherwise I was very happy with the results from both but preferred the blue LCD2USB because the 1080P’s power light is blue.

I was pleasantly surprised by the nMEDIAPC 1080P’s combination of good looks and excellent price.  While there were some minor issues with build quality it was the by far the easiest low profile HTPC case I have worked with and at $60 [product links] should be seriously considered by any enthusiast on a budget.


Thanks to nMEDIAPC for providing the review sample.