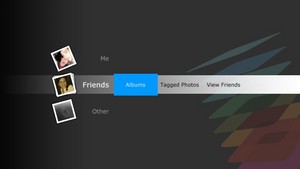 I normally like to wait until an application has been released before doing a review on it, but the few times I come across an app that my girlfriend loves I have to break that rule and take a closer look. Such is the case with Photato’s innovative design and creative interface into Facebook’s photos.

In simple terms, Photato for Media Center is really just a way to view you and your friends’ Facebook photos via your remote control. But there’s much more to it as you can see from even this early beta release. I am a real fan of developers who can take their own creativity with the power that MCML allows, and Photato definitely delivers that.

If you are NOT a fan of applications that differ from the color schemes
of Media Center, then you will probably be dissapointed here.
Personally, I’m not a huge fan of the dark grey scheme, but all the
transition and graphics effects make it so you barely even notice it.

Photato lets view pretty much any photos you would want to view from
your regular computer. View all your personal and tagged photos, browse
through your friends’ albums and see their tagged photos as well. As
I’m sure you Facebook aficionados will attest to, that’s more than
enough photos to occupy a lifetime. And of course, there’s a slideshow
feature which will scroll through all the pictures in that category,
just like Media Center’s picture slideshow.

Photato stands out first and foremost by being the first (ok, second)
of its kind. As far as I am aware, there is no similar application for
Media Center for neither Facebook, Myspace or any other community
website outside of the photo-dedicated FlickR site and the excellent Big Screen Photos which brings those photos to the big screen wonderfully.

Fortunate for all Media Center world though, just being available was
not sufficient. I’m sure the folks at Armchairware.com could have
easily created a simple Facebook photos application which allowed
similar functionality. Instead, what makes Photato catch everyone’s eye
is the beautiful graphics and effects that they have been able to
design on top of the MCML foundation of Media Center. Control with a
remote is exactly how you would expect from a Media Center application,
with some neat hidden gems–such as the OK button to toggle the photo
information. Even small nuances like the random photos that appear at
the frontpage of the app, just goes to show the attention to detail
which you will all appreciate.

Take this with a grain of salt, since it is a beta application (and
also because my internet speed might be the culprit), but I found the
loading time to be longer than I would prefer. From the initial load of
the application, to even loading my Friends’ albums (which contain a
lot of photos), the waiting time could be a problem for some. I would
imagine this is just in regards to tweaking, but in the event that
there could be a quicker way to load pages (maybe without thumbnails
for dial-up users), I’m throwing my request in there.

Also, and this is no fault of Photato but moreso I imagine the way
Facebook’s system works, is the initial login requires a keyboard and
mouse, as its simply a web browser. Hopefully this can be changed to
incorporate support for a remote control entry, as I am not a big fan
of having to pull out the keyboard once I’m in Media Center.

Grade: Once a Week is Plenty

For an initial application from a new website, I am blown away by what
Photato is and what it will become. Already it has gained popularity
and it hasn’t even left beta stage. I will admit, this is probably not
the type of application you will use on an everyday basis, but it is
ideal for any parties or get togethers you may have. In my case, I
would use it proudly anytime I got the famous "What’s that computer
doing in your living room" question.


As more people become familiar with other technologies being
brought to their television from their laptops (Netflix, Hulu, etc), it
will be applications like Photato that keep Media Center ahead of the
crowd. On a similar note, it’s the creative designers like these which
will continue to push the boundaries of Media Center, and hopefully
encourage the bigger companies not just to develop applications for it
(and keep them there…ahem…), but also to use their creative skills
as well on really delivering something above and beyond.