So my wife took the kids to grandma’s and I finally had some time to open and install the LG BD690 she’d given me for my birthday. I had my eye on the LG BD590 for a while because of the built-in disk drive. IMHO, it just makes it a more functional and hackable device in the long run, and being able to pre-download a movie helps avoid any possible network hiccups. But, I’d been holding off since the BD590 didn’t support Amazon, and with the Amazon Prime free streaming option, I wanted to find something that could stream HD video. Unfortunately, due to ridiculous copyright restrictions, Amazon/Vudu/etc.. can’t stream HD movies to any PC, including an HTPC. That, and the fact that my experience with ArcSoft TMT has been less than stellar, I’ve been looking to pick up a standalone player that can do both Amazon and Vudu. I was very excited when I saw the BD690 make Amazon’s VOD list of compatible devices. The fact it can also do 3D is meaningless to me, since my Pioneer Kuro 141FD isn’t going anywhere soon, and it’s still hard to find anything out there that beats the 2D picture. But the 3D feature does increase the resell-ability when it’s time to move on.

So let’s start with the obligatory box shot:

Whoa, Styrofoam and plastic bags! Who would of guessed?

So let’s carefully extract everything. Hmm… a black box with a couple cables and a remote… No HDMI cable included, instead the throw in an Netflix flyer. The manual is on the CD.

I was a little disappointed to only find one HDMI out, but that’s not a deal breaker by any means:

Time to put it into the rack. Oops, out of network cables (Friends don’t let friends stream video over wireless). I just happen to have one more port left in the gigabit switch. There’s other things I can move to the 100Mbit wireless ports if need be.

So only two wires in/out. That’s nice. Don’t mind the HDMI/HDCP converter. I use that to rip VCR tapes. I pass the JVC HR-S9500 through the SC-07 Faroudja processor to upscale them to 720p, then feed them back into the Hauppauge Colossus through the converter. It killed me to find out that the SC-07 was adding HDCP encryption to my VCR feed. Now can anyone can explain to me why this $60 device can be legally sold by Amazon, but the HDFury can’t?

So doesn’t this look much better? I tried to draw this out in Autocad, but it crashed with too many connectors… and yes, my HDMI cables are the same ones being used for the A.C. Clark Space Elevator…

Hey, why won’t it turn on!?! Did I push everything back into place but forget to plug the power cord into the UPS? Well, at least I didn’t call the 800 number. Finally, here it is in the stack. 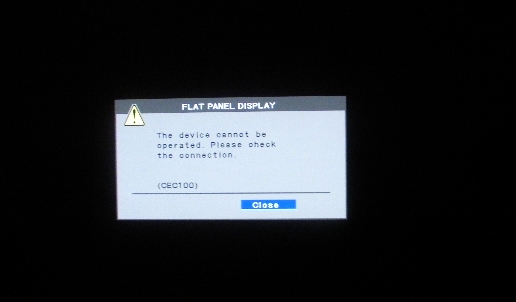 (Don’t worry, as part of creating this review, I learned about ISO speed and how to take photos of my TV. The photos get better.) Hmm.. It’s coming from the Kuro. Hitting OK made it go away. Let’s move along. Ut Oh, this is going to become a little irritating…

The easy fix was to turn off Kurolink in the monitor setup. I wasn’t really using it for anything anyways. I may loose some on-screen volume display…

Cruised over to setup and checked things out. Figured the first thing to do was download the firmware update.

This took a really long time….

But after 15 minutes or so it finished. I then when digging for the Amazon app, but couldn’t find it. Turns out there’s a second update that needs to be done in the LG Premium app section that installs Amazon and a number of other apps. LG separates the apps you download from their store from the set of apps they present by default.

So once the upgrade is installed, Amazon shows up right next to Netflix, Vudu and Hulu Plus. YouTube, Picasa and Google Maps are thrown in for good measure (Google TV?), along with a number of music services: Pandora, Napster, and others I’m not familiar with. For sport fans, the MLB and NHL networks are there. The NBA was there when I installed, but went away in the latest update. Could be simply because the season is over. Could the “Coming Soon” box be the NFL?

There’s an Associated Press App which lets you read articles and look at news photos:

And a couple games in the FunSpot like Suduko and the like, but those are both things much better done on a tablet or PC.
For kicks I installed an app called “For the Children” figuring I could show something to my kids. It seems most of the “apps” are just collections of short films. Let me warn you right now “For the Children” isn’t really suitable for children…

So the next thing I did was try out my Amazon Prime account. $79/yr for free 2 day shipping never quite seemed worth the price to me, but throw in 9000 free movies and TV shows, and we have a deal! First, the LG box generates a code, which you then go to Amazon and enter: 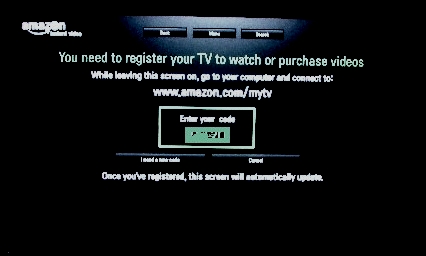 Hmm, top of the free movie list are all R rated T&A movies. Damn Amazon and their purchase profiling!

Watched CASHBACK, which I have to give 4 stars to. 4 stars for gratuitous nudity, and 3 stars for a quasi-sci-fi plot and 5 stars for morphing into a romantic comedy by the end that my wife actually liked. So I wasn’t impressed by the streaming speed. Noticeable frame jitter on almost any scene with movement. So I switched back to the HTPC to compare. BTW: Amazon does not like you watching two movies at once: 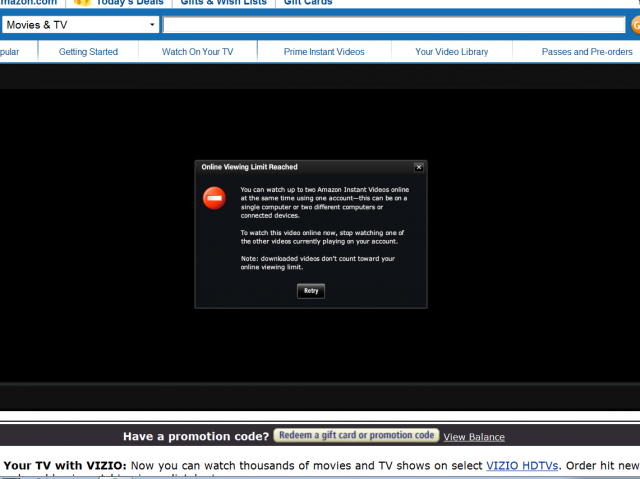 But what I did notice is Amazon said I had a slow connection! I ran a SpeakEasy test (25Mbps down), and then switched back to the Amazon web page, and it ran a little better on the HTPC. Then I switched back to the BD690 and saw I’m still only getting 2 bars from Amazon: 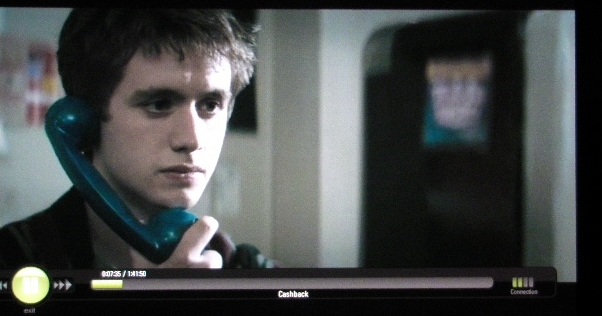 Thinking it might be a problem with the LG, I ran the Vudu speed test, and it said go HD all the way: 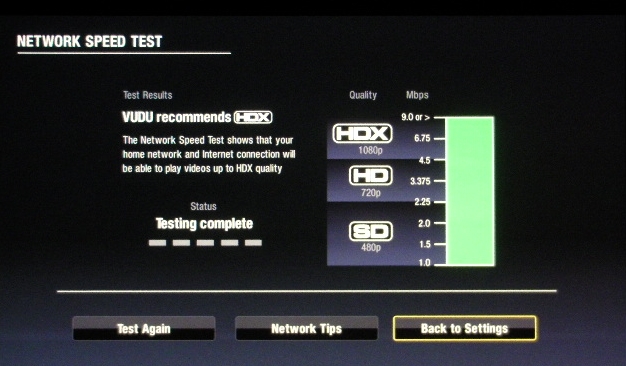 So now I have to ask is Comcast slowing down my Amazon connection? Well, since I have a 250G harddisk in the LG-690, I’ll just download the movie first. Unfortunately, the LG app DOES NOT support Amazon’s download option (which Amazon UnBox does

I suspect the reason is LG hasn’t upgraded the app for the 690, which has the 250G drive inside. Quite disappointing, since this would resolve the streaming problem. So the next day, I tried it again, this time with BBC’s Yellowstone Winter in HD. It initially also started at 2 bars, but within 5 minutes, hit hit HD quality:

Pretty awesome show. If nothing else, fast forward 30 minutes in to watch this fox catch a mouse though 6 feet of snow. But of course, I’m still not 100% happy with the HD experience, because I’m only getting Stereo output from the LG: 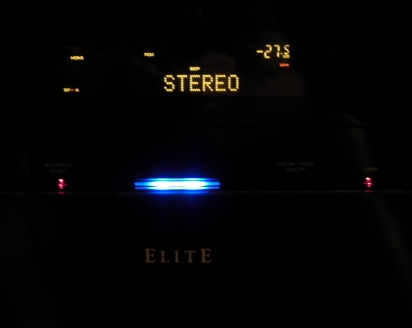 Now, you probably assume that the Amazon HD format doesn’t contain an HD audio track, except it’s not true. It turns out all the Amazon downloads I’ve checked contain a 6 channel WMA track:

And if you play the file using Windows Media Player, and choose SPDIF output (NOT HDMI): 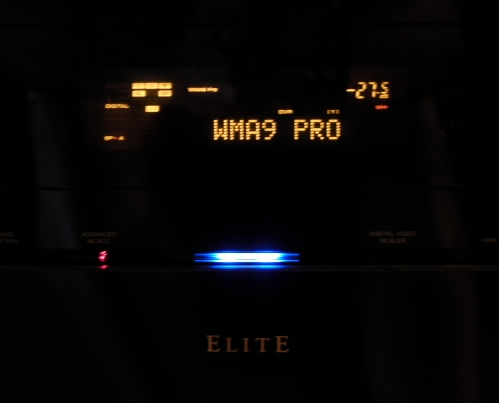 It’s possible Amazon delivers a different file to the HTPC than the one that’s delivered to the LG. If they ever implement the LG download capability, I can check. Finally, just to show you my LG audio is configured correctly, Vudu HD movies do play a 5-1 surround sound track: 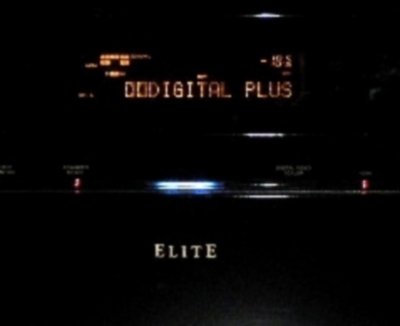 So hopefully an update is in the works to fix this as well as the download issue.

I stumbled across a couple other interesting features in the player. For one, I was very happy to see they support addition disk space via the USB port: 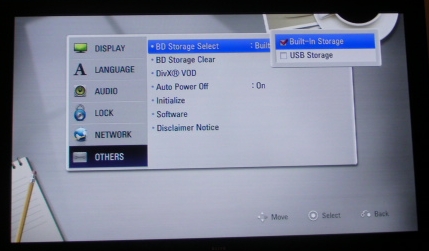 Also, from the main menu when you select Movies or Photos, you’re shown the list of DLNA and Windows Shares on your network: 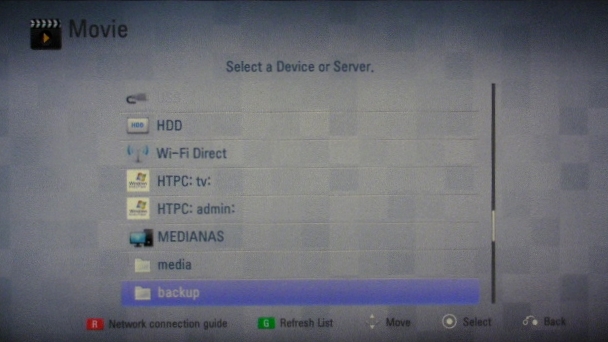 I do now have 8TB on my NAS (mostly WTV files which won’t play here) but I thought it would be interesting to see what other formats were supported. Unfortunately, I was unable to mount the share for an incredibly stupid reason. The CIFS/Samba client interface assumes the share is protected by a username and password. If it’s not, you get an error every time you try to mount it, regardless of whether you give it a valid username and password or leave it blank:

LG email support was a black hole, and I had no desire to try to explain what I was doing to a phone tech, so I broke down and added a password to my NAS share, just to see if that would solve the problem. It did, and I by chance discovered the work-around to the original problem. Even when I went back and removed the password from my NAS share (didn’t want to deal with changing all the automated batch files I have that update it in the middle of the night) the LG was now fine with continuing to browse the filesystem, even after a power cycle. So it was interesting to see what would and wouldn’t play, and I have to say I was a little disappointed. I was also quite surprised at the random mix of video formats I’d collected, without trying:

BTW: If you ever meet an Excel developer from Microsoft, please grab them by the neck, shake violently and scream “1920×[email protected] NOT AN EMAIL ADDRESS!!!!” I’d really appreciate it.

Since the HTPC happily plays all these files without issue, I don’t really care that the BD690 doesn’t. It’s certainly not what I purchased the product for.   BTW: AVSForum users have said the LG plays back MKV files as well, but I don’t have any to test, so I can’t say what codecs and/or sound quality is supported.

But does it play Blu-Ray Discs?

Finally, I thought I should check how BD disks played, especially since one of the primary reasons for the purchase was to have a backup when TMT is acting up. So I burned the AVSHD tuning ISO and was quite happy to see the LG read the burned disc when TMT wouldn’t. The 690 has a 0-255 RGB setting which the Kuro likes. The screen only needed a few minor tweeks from the movie setting: 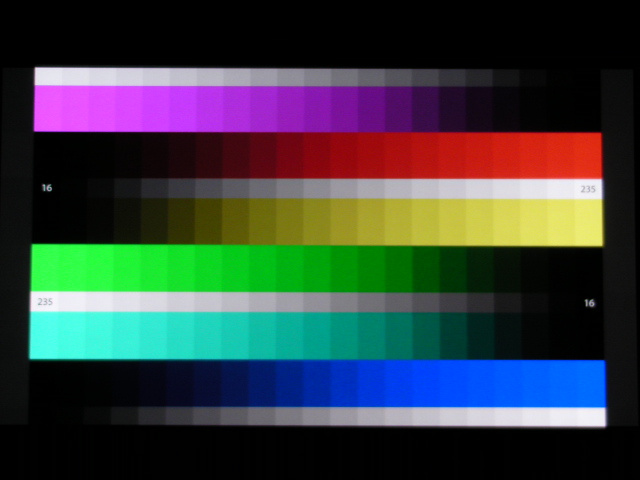 Trust me, this looks better in person.

So I did some back-to-back comparisons playing Inception (2D) on both the HTPC with the latest TMT software (5.0.1.114), and then the BD690. Once again, I had to fiddle with the audio settings in order to get TMT to switch to HDMI bitstreaming (BD690 of course does this by default). FF/RW and Chapter Skip worked flawlessly on both systems. It wasn’t until I just let the movie run for 10 minutes or so when the playback on the HTPC started studdering, and the amplifier would show the audio switching between stereo and TrueHD. Went back and played the same disc & chapter on the BD690. No problems. So good to know my primary goal was achieved.

Overall I’m pretty happy with the purchase. The poor format support is really non-issue for me. Also, I wasn’t able to do any 3D playback testing since I don’t have a 3D screen. The two things I really like to see:

Hopefully someone at Amazon/LG is addressing both issues.