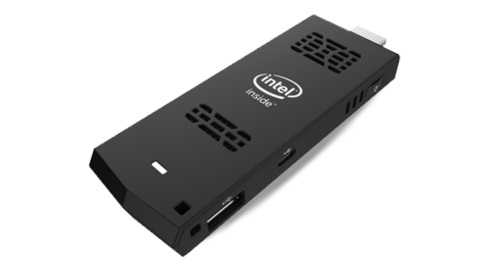 The Intel Compute Stick caused quite a stir when it was announced at CES 2015, and it’s easy to see why – Intel managed to stuff an entire Atom based PC into an HDMI dongle. The STCK1A32WFC model includes an Intel Atom Z3735F processor, 2GB of DDR3L RAM, 32GB of storage, 802.11bgn Wi-Fi (Realtek RTL8723BS), and Bluetooth 4.0 built-in for around $150. This is the Windows version, so it’s spec’d a bit higher than the Linux rev (should run around $110 and sacrifices RAM and storage), but either way you won’t have to pay for the OS because includes Microsoft Windows 8.1 with Bing. Of course all of this was announced back in January, so let’s find out if this PC, err Compute Stick, has the chops to be a home theater PC (HTPC).

The Intel Compute Stick comes with everything required to get started, even the OS, including a fantastic multi-plug power 2 AMP USB adapter, HDMI extension cable, and USB cable. The STCK1A32WFC  Intel Atom Z3735F processor has a base frequency of 1.33/1.83GHz (base/burst) which should be fine for most HTPC computing tasks, but the GPU’s 311/646MHz (base/burst) could be an issue. The device’s 32GB of built-in storage should be plenty for most applications, but there is also a microSD slot which can support up to 128GB additionally.

The Intel Compute Stick’s BIOS is extremely limited both in options and features. Obviously it wouldn’t be reasonable to expect too much tweakabiliy given the form factor and digital signage target, but in this case it was also a blocking issue when it came to installing OpenELEC. I tried several different routes to getting it working, but the UEFI only boot options proved insurmountable in the limited amount of time I had with the device. I have a few more things I’d like to try, so if success can be found I will let you know. There is one gem in here, and it’s found on the second page where a toggle is available to control whether the stick powers itself on automatically when power is applied. This makes it perfect for unattended installations as well as scenarios where power will be provided by the TV or AVR directly. Just don’t forget to power it down manually before switching off the TV/AVR. 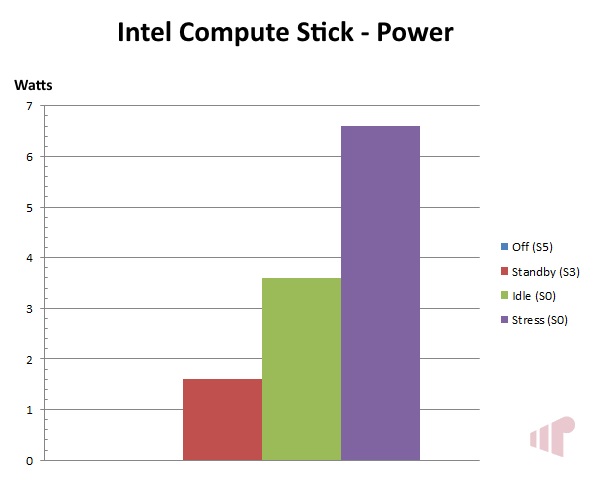 The Intel Compute Stick is based on a low power Atom processor, so it was not surprising at all to see that it turned in very good numbers here. With 0W measured in S4/S5, and 3.5W when idle. There is a small fan installed internally, and under stress it spins up quickly producing a small, somewhat annoying, whine from the device.

Unfortunately the Intel Compute Stick’s GPU is not quite up to the task when it comes to decoding and rendering non-1080p video at 1080p. This is the case both when using madVR and the EVR, with the main performance hit taken in deinterlacing. In practice this means that for most TV sourced content the Intel Compute Stick is not suitable.

Refresh rate accuracy is also not where it should be, especially in contrast with other recent Intel platforms. So even 1080p video content with not render without dropping frames occasionally, most noticeably with 24p content. 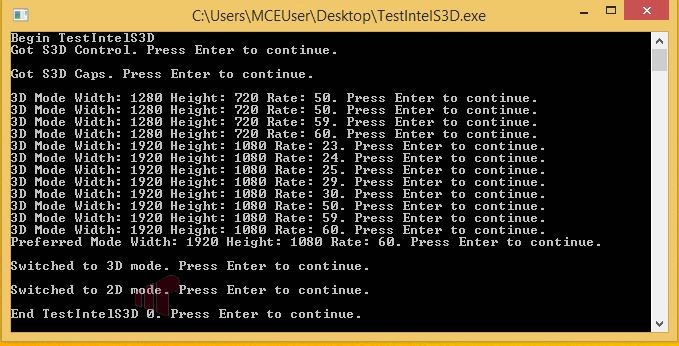 I did not get a chance to test with commercial software and Blu-ray 3D content, but interestingly 3D playback appears to be supported by the Intel Compute Stick, and levels are consistent with other Intel GPUs (i.e. good).

Audio capabilities are consistent with other Atom based systems we’ve tested. With HBR formats like Dolby TrueHD & DTS-MA not supported. Eight channels are supported and there is plenty of CPU headroom during playback so decoding on the PC is a suitable alternative. Dolby Digital Plus (DD+) is supported however, so the Intel Compute Stick is actually a quite reasonable Netflix client.

I must admit that even though that this iteration of the Intel Compute Stick will not meet the demands of requiring HTPC users, and the Intel BayTrail NUC is a better value if you don’t need a Windows license, I still love the concept. There is just something so fantastic about this mini-PC. To be fair it really is intended more for signage than HTPC, so some of the failings are understandable especially given the power consumption and form factor constraints. Either way, it is hard to recommend the STCK1A32WFC as a Windows HTPC (I haven’t given up trying to get OpenELEC on it), but Intel clearly deserves praise for pushing the envelope and I look forward to seeing how Moore’s Law (Observation) will advance what this form factor is capable of. I would love to see a capacitor included which would allow for a graceful hibernate when power is removed, which would make it even better for HTPC use and open up other (e.g. automobile) use scenarios when combined with its auto-power-on feature.