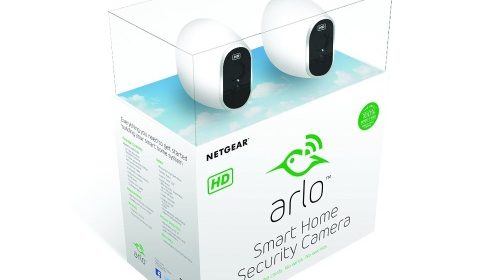 Where in the past OEMs have happily sold wireless cameras, and the infrastructure to put them on the network, no one has tried to tie it all together into a consumer product that is reliable and easy to use. With the recent release of Arlo, NETGEAR has done exactly that, signaling a strong a desire to build a discrete brand leveraging its deep networking expertise to deliver a rich and approachable monitoring ecosystem. To accomplish this Arlo is the combination of up to three 2.4GHz 802.11N base stations + up to fifteen weatherproof and completely wireless cameras. This holistic approach is unique because it provides a solution instead of just the parts, but to fully scale out the system there are hardware ($350 for a two camera setup to $500 for four, $160/camera à la carte) and ongoing service costs ($10-15/month or $99-149/year). There is no denying that NETGEAR Arlo is quite intriguing, let’s dig into the details.

The camera is the focus with Arlo, and NETGEAR does a great job of highlighting that with the packaging. In a field of crowded wireless IP cameras, it would be easy to miss that Arlo is completely wireless, as in there are no wires. Well, that’s not exactly true because the box includes a couple; power and an Ethernet cable. Which, while I understand the need for power, requiring the base station to be physically connected to a wired network is an unfortunate constraint; for most users there will only be one place to meet this requirement, right next the Wi-Fi router. Finding space nearby might be inconvenient, but the bigger issue is that because the cameras rely completely on the base station’s Wi-Fi, range could become an issue as it competes with the router and may be located in a place which is sub-optimal for providing signal outside the house (e.g. front and back doors will be common install locations). Hopefully, this can be addressed via one of the USB ports (which don’t currently do anything), or in a V2 product – where wall mounting capability would also be welcome. NETGEAR also includes four magnetic mounts, screws and enough CR123 batteries for the cameras included in the kit (the VMS3230 has two cameras). Interestingly the power supply is 120V/60Hz only, so no grey market importing to 240/50-land (should hit the UK by end of March) unless you have a 12V/1.5A handy (fortunately I did or this would have been a quite different review :)).

Installing Arlo was incredibly easy, all it took was a screw driver and some pressure; which was in welcome contrast to when I installed a wired system and had to pull cables through the attic back when we still lived in Florida. All told, I definitely spent more time thinking about where the cameras should go than actually putting them up. When planning your install, it is important to note that Arlo uses a passive infrared sensor (PIR) for motion detection, so anything reflective (like a pane of glass) between it and the monitored area will stop that feature from working. The cameras are IPX5 rated, so there is no reason why you would need to protect from the elements anyway. Both of the cameras have been mounted outside for the majority of the two weeks since they arrived, with the weather being quite agreeable for testing this (i.e. it’s been very unpleasant; with frost overnight and rain for much of that time), and they have performed admirably. However, those living in significantly colder climates (I live in the greenspace between London and Reading, UK) might have some issues with the battery powered nature of the cameras. Unfortunately, that’s physics. The range of the 4.5W consuming base station might also be a problem for those in larger houses; in testing the camera would start experiencing issues more than 5-6’ from the cinderblock and brick exterior walls in the back yard (cough… garden). This is one area where reliance on a separate Arlo-only Wi-Fi network is problematic because if it ran off the existing wireless network it would be simple to add additional range via a Wi-Fi extender if this issue appeared.

Initial setup was simple, straight forward, and completed easily without even touching a PC via the WPS (+ something else?) based pairing mechanism. The only oddity was that I mistook the blinking USB indicator on front initially, so I wasn’t actually putting the base station into pairing mode properly first couple times I tried to connect the cameras.

It is possible to use Arlo without an app through any browser (something Windows Phone and Windows 8 Modern users will have grown accustomed to by now), but I found the Android application to be functionally equivalent, and since there currently isn’t a mechanism to integrate Arlo into a broader smart home ecosystem using it from a mobile device seemed much more natural. The experience is quite rich, with the ability to create targeted schedules to enable/disable motion detection rules (e.g. always monitor external cameras, but only internal ones when you expect to be away or sleeping), browse captured videos, and view live feeds directly. That said there were a few idiosyncrasies which hopefully will be addressed:

Now to be clear, these are mostly just annoyances, areas where there is an acceptable lack of polish in an app at this stage (remember Arlo launched in January) in its lifecycle. Some of these, like the app exits, NETGEAR expects to fix quite soon. Aside from these minor issues with the app, the device + base station + Cloud was remarkably reliable both in daylight and at night. Significant testing was performed to probe the limits of motion detection and capture with no failures noted. There is one caveat worth mentioning however, because the camera only begins recording after motion is detected (to conserve battery) it is possible for the object that triggered motion to have moved outside the field of capture by the time it begins (e.g. throwing a ball perpendicular to the main point of view). This aspect of the device’s function just needs to be planned around so that the camera has time to detect motion and start recording well before the monitored object can be reached (i.e. point it down the walk leading to a door instead of directly at the door).

There is another aspect to Arlo’s function that also bears mentioning, it requires an active Internet connection at all times. In practice this means that any events that are captured during an outage will be lost. How critical an issue this is will depend on the application, and the reliability of your ISP. 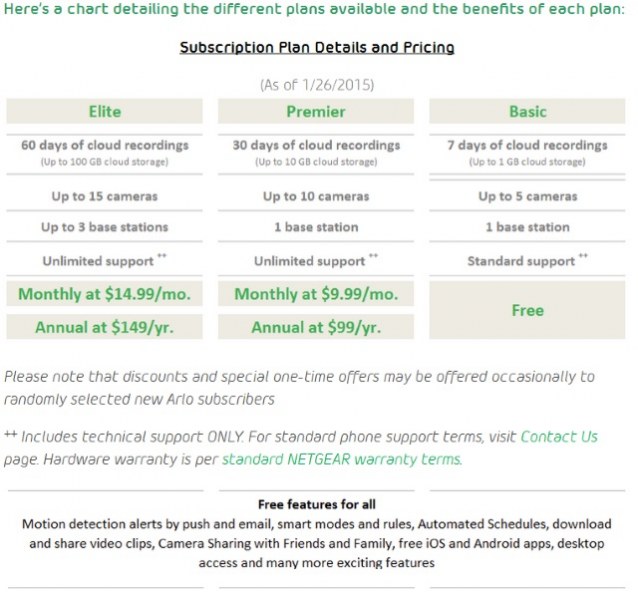 The last thing to address is the service plans, which confuse me somewhat given the price of the hardware. First off, at the basic plan level I think the price of the hardware is reasonable given what it does and what is provided. Also, there is nothing untoward about requiring additional payments for longer clip retention or more online storage; although I would like to see an option to cache clips locally and opt-out of Cloud based storage completely, either by keeping the clips on a local USB or NAS drive. The camera/base station count limitation is odd however, although it is unlikely that most users will need to scale beyond five+one, it feels strange because the cameras are $160 each and the cheapest base station + camera is $200 so after getting past five, users need to pay for the hardware and at least $99/year to use it.

When I first learned of Arlo’s existence, the weatherproof (IPX5) 720p wireless cameras and flexible installation were killer features, but I have to admit that I was a bit put off by the price of the hardware ($350-$500). Arlo certainly isn’t cheap, but after comparing the flexibility, features, and convenience against a competitive wired system and spending some time with it I don’t think that is a valid concern for most installations. The cameras are incredibly easy to mount and move. You don’t have to drill holes for wires or pull them through the attic or the walls, and unlike most security DVRs you get an incredibly approachable and “just works” ecosystem. I really like the system. I would happily recommend it to anyone looking for a casual monitoring solution, but given what I want from a home automation (HA) system, I’m not sure that I would buy it personally – yet.

In a richer HA environment cameras need to be sensors that join, and integrate into, the larger ecosystem. Motion events, and the images that are captured as a result of these events, need to surface as triggers to the controller for use in scenes (automated responses to events). Without these triggers and associated data, information is siloed in a way that makes it only human actionable (i.e. you have to process and respond personally) and it isn’t possible to make it useful for doing things like turning on lights when you approach, or opening the garage door when your license plate is recognized. Fortunately, NETGEAR is aware of this need, recently joining the AllSeen Alliance, and is currently working on 3rd party integration and will make an API available at some point, but it is still unclear about who or what exactly will be enabled by this when it arrives so if this is a critical feature patience is a necessary virtue.