Amazon Fire TV as a PVR Client with Kodi

Kodi (aka XBMC) is catching fire by using the Amazon Fire TV as a client. As both a user of MCE and SageTV via cableCARD, I have been looking to find a replacement for those particular PVR HTPC systems that has extender capabilities due to no more or little further development from either camp in quite a while. MCE has never really had a viable extender for my needs and I always found them to use way to many resources while not being able to play common file types very well and consistently. SageTV is not cableCARD certified, however due to my cable company not encrypting most of the channels it has been a very good option  for me with the exception of no more support or development unless it is through the user forums which has really slowed down to a crawl. Still if aint broke don’t fix right? Well that’s the trouble. Things are beginning to not work as the should a bit with some of the features over at SageTV. While they are minor issues, Youtube being one was fixed by a software writer in the forum.  My bigger concern was noticing a couple of channels that I would normally get were now encrypted. While first figuring it was a glitch, upon discussion with a coworker, he had mentioned that my cable provider was bought by another cable provider. At about that time is when this issue had surfaced. It could be coincidence but not something that I could chance.

So, after testing WMC through an Xbox 360 as an extender, it reminded me of all the reasons why I went back to SageTV in the first place. The very first file that I tried playing that wasn’t a WTV or Windows Media format didn’t work very well despite having all of the correct codecs installed on the HTPC. It’s overall response was a bit sluggish too. So I started looking into XBMC and found out they changed the name to KODI. Upon researching the situation I found out that someone had created a way for the WMC recording engine to be used in Kodi and it is called ServerWMC. After trying it out with Kodi on the HTPC unit itself, I found it to worked very well. In fact if I wanted too, I can set up my recordings and series with Ceton’s MyMedia Center app. One down, now for my extender/client concern.

Upon researching, I found that many were using media streamers as a client instead of using PC’s. There are many to choose from, however after doing research, The Amazon Fire TV seemed to be the most popular due to the strong ARM processor, specs of the unit and the flexibility of side loading apps from any android device as well as ones made for that such as an APK file for Kodi. So I figured I’d give it a try. I have to tell you, the speed was impressive and it played all of my files the way I wanted it to with the additional apps such as Netflix. Our own Mike Garcen wrote a great article reviewing its usability and unboxing the unit which you can check out here.

Due to Mike having covered a lot regarding Amazon’s Fire TV and Fire TV stick, this writing is specifically geared to how it works as a PVR through Amazon Fire TV via cableCARD with Kodi using the WMC’s recording engine. After downloading and side load installing the APK into my Amazon FireTV, it was test time. The first thing I did was find a way that I could launch Kodi from the front screen of Amazon TV instead of having to go to Settings/Apps/Manage all installed apps, then scrolling down to launch it. Front loaded and done-without needing to root my device. That’s a big one for the SAF!

The Functionality using it as a PVR is a bit unique. Using the proprietary Bluetooth remote control takes away from it a bit not having any digits to enter going into the next channel among any guide or remote specific buttons normally accompanied with a PVR. Bringing up the guide in full guide mode is a real problem if you have say 500-700 channels from your cable company. It sometimes locks up Kodi and can take a minute or two to finally come up. It does not do this on the base HTPC machine or another computer that is used as a client. Why it does this on the Amazon Fire TV is a mystery which I hope will be worked out soon. A couple of things that I did to prevent lock ups as well as bring it up in about 15-20 seconds was reduce the redundant channels in my guide. I did this by going directly in WMC by removing the standard 480p/I channels that I am already receiving in HDTV, any other reduntant “satelite channels that is exactly the same thing and channels that I would never watch that do not fit my need. I found this to be a blessing in disguise. I also reduced the amount of days in the guide from 14 to 4. I figured if I want to see things further out, I can use the MyMedia Center app from Ceton or just go upstairs on the main HTPC. For the most part I am very content with what comes up. The mini guide comes up instantly and will show you what is on as of right now and I use that the majority of the time. 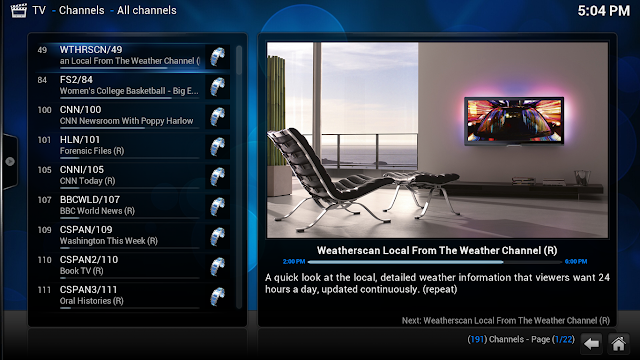 For those unfamiliar with Kodi, when scheduling your recordings the lingo is a bit different than what most are accustomed to when using SageTV or WMC. Clicking on a show in the main guide and then clicking “OK” will not tune the show, you need to click on “switch” to tune the show. To record, you need to click on “timer” which will then give you the option to record just that show or the series and you can direct it to record with just that channel or all channels, new only episodes or new and rerun as well . If searching for more airings of that same show, you can select “find similar” which would bring up all of the episodes that will be aired. I found this to be intuitive enough for me. A couple of oddities to note. When doing the search to “find similar” it will only be able to search for the similar show for up to how many days you have guide data in the Kodi on the Amazon Fire TV. In my case it’s 4 days. If you record a series, you will able to see scheduled recordings past your AFTV client because Kodi is basing everything off of the WMC recording engine which goes up to 14 days. I am thankful for My Media Center in those rare instances. 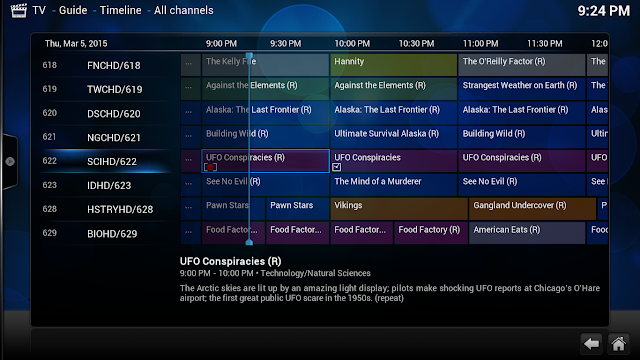 The live TV picture quality is generally very good as long as it is not interlaced. If it is interlaced such as 1080i, the AFTV unit will not de-interlace it for you. This gives you a bit of a blurrier picture or lines across the screen during movement. Most of it is tolerable, however if it is a fast action seen, this can be quite irritating. Again 720P or 1080P is not a problem. In fact some movies have such amazing quality on it, I think in some ways it’s better than my PS3 in regards to picture quality. If you are a big basketball fan where a lot of your content is on 1080i programming, this may be a deal breaker for you. Football is not as bad with my experience and I reviewed this with some old games that I recorded and it looks good, not great but good. When comparing the 1080i content to a SageTV extender, the SageTV extender blows away the AFTV. When compared to the Xbox 360 the Xbox was better than the AVFT but not as good as the SageTV extender. It was somewhere in between. This testing was all done on my LG 55 inch TV. On our other 3 32 inch TV’s it wasn’t as big of a deal. 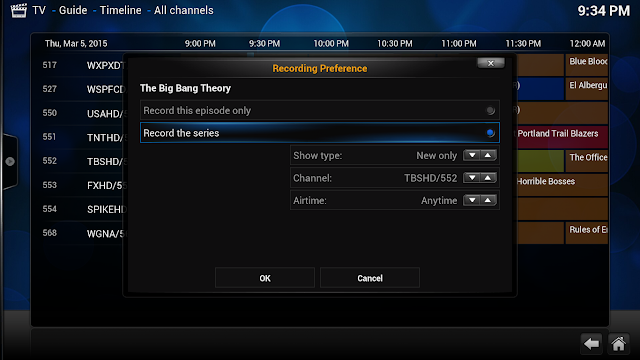 I have tried different codecs and settings in Kodi to reduce the blurriness in the 1080i content and the best setting to fit my tastes was for me to go to settings/video/hardware acceleration/making sure the option of hardware acceleration is the one selected and having only the “mediacodec” selected, then when playing video or live TV, hit enter, then the “movie real” button to go into video settings, de-interlace off, method is “auto”. I find that if I turn on the de-interlacing that it makes the picture very jerky. I hear version 15 is supposed to be coming out with “BOB” method, but until then this is what we are working with in my house. Certainly my preferences could be different than yours so choose what works best for you. 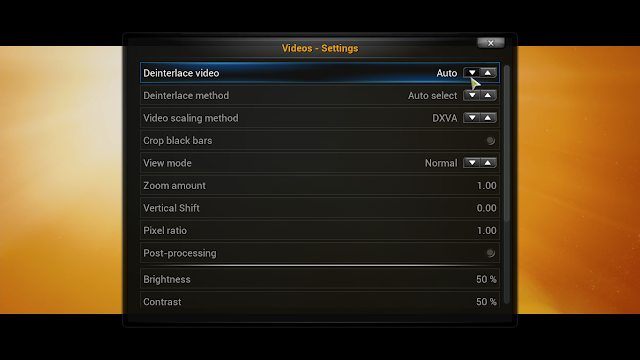 In closing I have shown that the ServerWMC has been very reliable at recording my shows and for me, I may have found my permanent replacement for SageTV and WMC while still have the ability of a certified cableCARD tuner through the WMC recording engine. No it is not perfect, if you have 1080i content through live TV the picture quality may not be acceptable for you depending on the content that you enjoy. Media streamers as a whole were never made for interlaced content and in the defense of the Amazon Fire TV, why would they? It was meant to be a streamer. For me it works for my family however if it comes to a point that is unacceptable to me, then I can pick up a used Ceton Echo on Ebay for $80-$100 and stream live TV that way. I always did think that the Echo’s picture was superior when compared to the Xbox360 and I never had a major issue with the live TV playback from the Ceton Echo. Meanwhile the folks at Kodi are trying to resolve the interlaced content through the AFTV and I doubt that Amazon will upgrade the firmware to fix this, but you never know. The big question is, why didn’t Ceton jump all over this format? I get Microsoft is playing hardball with Windows 8 and non Microsoft extenders, so why not go in a different direction and have an Android based system loaded with XBMC/Kodi, pay them their royalties or create your own PVR software and use the WMC recording engine with your own solution and put it in with the Echo 2 or work with say AFTV to fix the interlacing issue and have your app in there. I really wish you would because we can use the help in the HTPC community and Ceton does have very good products. I hope something is on the way from Ceton regarding an extender other than the current Echo format. I think there’s a very viable market out there.

So what do think about the Amazon Fire TV using the WMC recording engine with Kodi?