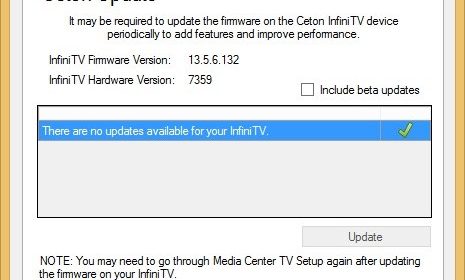 When it comes to Digital Cable Tuners (DCT), time has been extremely generous to the home theater PC (HTPC) enthusiast. What was once $200 per tuner is now just $50. With multiple options for connection and tuner count per device available, the market appeared complete, though obviously it was not with Ceton still holding an additional card to play – the $299 six(!) tuner infiniTV6. While Ceton cannot claim to be the first to put six tuners into a single chassis, they are the only ones to do it with a single Multi-stream CableCARD (M-CARD) – marking the realization on the technologies’ full potential and saving users some coin by reducing the number of M-CARDs required to push past four tuners. With the PCIe variant still “coming soon,” we examine the [much more interesting] Ethernet model–Ceton’s first native network-attached CableCARD tuner.

Ceton’s retail packaging is always really good; simple, functional and as easy on the eyes as it is to open and reuse. Inside we find the infiniTV6, power adapter and two cables–one Ethernet and the other for USB. Experience has taught me never to trust OEM packaged Ethernet cables (although this one looks nice), but this ambivalence cannot be applied to the USB cable because it is the first example of the previously only theoretical mini-USB-to-USB B adapter I’ve ever seen–essential should your cable provider see fit to curse your neighborhood with Switched Digital Video (SDV), now or in the future.

The infiniTV6 Ethernet and its ifiniTV4 USB sibling have identical dimensions (7.1″ x 5.25″ x 1.1″) and construction. The main visual differences are the presence of a Gigabit Ethernet port, as well as a mini-USB instead of USB B port. Photos do no justice to the tactile solidity of the infiniTV6’s construction. The materials and assembly look and feel like a $300 device should. The only “negative” point which made it into the notes is that the mini-USB port (used for SDV) is a bit tight, making it difficult to insert the included cable while the M-CARD is seated, but since this also makes unintentional detachment unlikely, this point also made it into the “plus” column as well. Given the relative compactness of the infiniTV6 and the presence of Ethernet, it begs to be installed within a structured wiring panel, but unfortunately a native vertical mounting solution is not provided. This can be remedied of by rigging up a makeshift harness, but is less than ideal.

Installation was a simple click-through affair leading up to the point where the Ceton Diagnostic Tool automatically (you can opt out if desired) launched to check for firmware updates. A reboot is required after driver installation or updating firmware; while this is occasionally optional if using Microsoft Windows Media Center (WMC), it is a good idea to comply just in case any changes to the DRM scheme were made.

Driver installation is completely optional for software products that interface directly with the tuner via DRI (e.g. SageDCT), but still recommend because of the diagnostic tool.

After installation, the infiniTV6 advertises itself on the network. Double-clicking it is the easiest way to access the device’s web UI.

If you are patient, WMC will automatically find the infiniTV6 and offer to set it up.

In most cases WMC will discover and configure the tuners automatically, but it also provides the ability to bind individual tuners to specific PCs through the manual tuner selection wizard. If more than one HTPC will be used with the infiniTV6, this is currently the only reliable way to configure it.

During the Ceton driver install, WMC will be configured to allow the use of more than four tuners of a specific type. If this does not work as expected (e.g. because the driver was installed prior to WMC first run), just reboot and their service will take care of it.

Those fortunate enough to have a cable provider with a customer friendly stance on copy protection will be able to use products like SageDCT or JRiver Media Center with the infiniTV6. In both cases the applications discovered and interacted as they should.

A variety of hardware configurations and OSes were tested with the infiniTV6 (table below), including a virtual machine hosted on Windows Server 2012, with no stability issues noted in any non-beta configuration during the extended recording stress tests–the longest involving three PCs recording non-stop over 48 hours. Simply put, the infiniTV6 was rock solid.

As a real network attached DCT pushing [potentially] six HD streams, the infiniTV6 is highly dependent on the quality of the hosting network infrastructure. Ceton lists 100Mbps Ethernet as the minimum, but it is safest to use Gigabit. QAM technically supports up to 38Mbps per channel, but I have never observed anything higher than 19.2Mbps either with Cox or Comcast, but that still pushes peak utilization into 1000Mbps territory. This is not just theoretical either, as 114Mbps of network I/O was observed during testing. This was not common though, with the majority of bandwidth use falling into the mid-80Mbps (61Mbps was the lowest) while recording six channels. Connecting the infiniTV6 with the client PCs was tested with a single switch (D-Link DGS-1008G) as well as with a second switch (D-Link DGS-1024D) in between– both without issue.

The infiniTV6’s power consumption is somewhat complex because once it uses a tuner, power consumption never returns to the previous state. So while it idles at 6.5 watts (W) after rebooting, and usage ramps per tuner to a reasonable 10.2W, once all six tuners have been used the infiniTV6 will continue on at 10.2W even after recording is complete and no tuners are in use.

It is no secret that the infiniTV products get warm, so when preparing for this review I wrote a simple tool to collect the temperature reported by each tuner at one minute intervals during testing similar to the diagnostic tool provided by Ceton. Before moving on to the data, it is important to note that Ceton used different, more heat tolerant, tuner chips in the infiniTV6. So the maximum supported temperatures are different for infiniTV4 and infiniTV6 DCT. The diagnostic tool does not yet recognize the updated hardware limits of the infiniTV6, but that will change in the future.

The graph above represents 24 hours of temperature data (blue line) while recording six channels; for convenience, the maximum supported temperature (70C) is shown in red. During this test the infiniTV6 was located on a desk with no obstructions above or next to the device. The ambient temperature (25-27.78C/77-82F) during this time period mitigates the results somewhat, but clearly this data represents an issue with the cooling performance of the infiniTV6.

Digging in a bit, it is first important to note that I live in Florida and as you can imagine, it gets hot here. That said, it also gets hot (or at least as hot as it is right now) anywhere with a real summer–which is most of the US. So it is not valid to characterize this issue as out-of–the-ordinary or specific to southern locales.

The temperature drop noted above is quite interesting though because it coincides very conveniently with the time when the air conditioning (A/C) turns on to cool the house in late afternoon.

After expanding the dataset from 24 to 39 hours, it becomes highly probably that airflow is the key, because even though the ambient temperature was held at ~25C for the majority of the period added to the graph above, the infiniTV6’s temperature rises quite quickly towards 70C after the A/C transitioned from bulk to maintenance cooling. The second dip likely represents a brief period where the A/C turned on again overnight. Now Ceton is a bit different in that their “maximum” temperature is not intended to indicate the point where damage will occur (their tuners have been tested up to 150C without physical damage), just when stability can be impacted. So if your installation conditions mirror, or are more generous than those in this test it should not be an issue.

While hardly an eyesore, I suspect that few infiniTV6 DCT will setup camp in open air locales. Retreating instead, to the more natural habits of an Ethernet enabled TV tuner: the basement, garage, and of course the structured wiring panel.

Twelve hours in the box, produced similar, although slight better results for the infiniTV6. Although, I suspect that this could be traced back to slightly kinder weather because the maximum ambient temperature only reached 26.67C/80F during this test run.

With the Ceton infiniTV6 skirting the supported line it seemed natural to see how some active cooling would affect the results. To achieve this goal an 80mm PC fan was spliced to a USB cable and powering via a A/C USB phone charger. As it turned out the make-shift engineering attempt was quite successful – with Franken-fan producing no noise and consuming an unmeasurable amount of electricity (0W reported by the Kill-a-Watt 4600).

Running the open air test again, this time placing the customized cooling solution on top after allowing the infiniTV6 to reach a temperature over 65C, we can see an immediate and sustained positive reduction in tuner temperature over the next 24 hours–bringing the device’s temperature well under Ceton’s recommended maximum.

Given this result, the infiniTV6 and fan moved back into the structured wiring panel for an extended test run.

Using the same methodology as before (i.e. allowing the infiniTV6 to heat up before adding active cooling) also nets similar, though less dramatic, results. Although to be fair, the fan was not placed as advantageously because of the difficulty in securing both it and the infiniTV6 inside the panel. This would be a good gap for either Ceton, or third party, to fill by offering an active cooling solution which doubles as a vertical mount.

Currently, the infiniTV6 does not officially support tuner pooling/sharing so if an allocated tuner is requested the recording can fail, even if there are free tuners on the DCT. Ceton is working on this feature however, and it is offered in a beta version of the infiniTV6 firmware currently available, but the “beta” label is still appropriate at this time.

Where the inifiniTV6 never failed to record a show during several days of extended stress-testing with shipping firmware, the same cannot be said when utilizing the pooling feature. That is not to say that it does not work at all though; it actually does most of the time just not at the 100% level which is expected from a production tuner. I look forward to Ceton continuing to develop this feature. While I was initially skeptical of its value my opinion of it has changed significantly over time.

From the onset it seemed inconceivable that the Ceton infiniTV6’s six tuners exposed over Gigabit Ethernet would not be a “slam dunk” for the HTPC enthusiast. After all, given the way Digital Cable Tuners complete the whole home DVR ecosystem, how could having more tuners and the inherent installation flexibility of Ethernet at $50 a tuner from a single CableCARD not be? Unfortunately, as it often is, reality is more nuanced. While it is impossible to argue with the value provided, the “just record it” attitude enabled by removing tuner scarcity, and the outstanding stability observed over several extended full-utilization recording tests the Ceton infiniTV6 is not perfect. With the infiniTV6 quickly approaching, and occasionally exceeding, the maximum supported temperature in warmer environments without active cooling. Thankfully this is simple to mitigate by adding a fan, but it places a burden on users to discover, and correct, a potential source of instability.

Thanks to Ceton for providing the review sample.