In the quest to build the perfect low power home theater PC (HTPC) it is natural to select low voltage memory under the assumption that it will reduce consumption – lowering your power bill, and producing a greener system. To test this theory three Hyper-X Genesis LoVo memory kits from Kingston were put to the test in three different HTPC systems to determine not only what 1.35V versus 1.5V nets at the wall, but also how scaling up RAM affects consumption.

With all of the setup out of the way it is important to note that the DH77DF, like most Mini-ITX boards, only has two DIMM slots so the 32GB kit could not be tested. Now let’s dig into the numbers.

The first series of graphs captures the systems at idle and when stressed using Prime95’s “Blend” test, which was selected because of its memory intensive nature. These states are addressed together because they demonstrate the same output; a clear relationship between lowered consumption when the RAM modules are set to 1.35V compared to 1.5V. When idling the difference was negligible, ranging from 0.4W-0.9W depending on system and DIMM count, but under stress went as high as 3W in the ATX system with 32GB (four DIMMs) installed. It is also interesting to note that RAM density had very little impact on draw (so don’t hold back when questioning the value of stepping up 4->8->16GB :)), with the 2x 8GB and 2x 4GB kits recording very similar numbers, but adding modules (i.e. moving from 2x 8GB to 4x 8GB) increased consumption on average ~3W in the microATX system and ~7W with the ATX configuration. 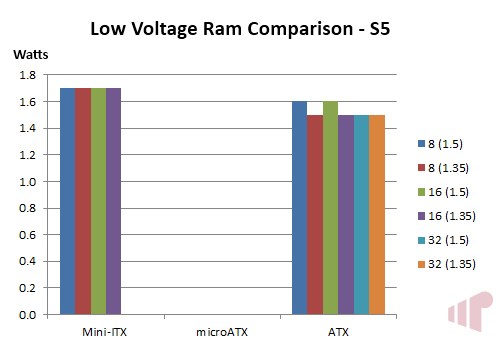 When the PC is in S5, or Soft-Off, RAM should not receive any power so the results above were not surprising. The difference between power supply units (PSU) was interesting however, with the Antec mopping the floor with others. It was not surprising that the 600W OCZ fell behind here, but the results from the picoPSU were. 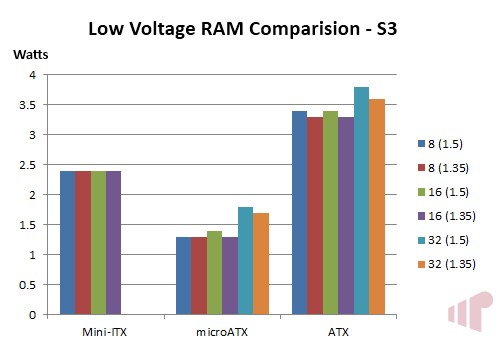 System state is stored in RAM during S3 (standby), so it must be powered. The numbers are not quite as clear here as they were in the idle/stress states however, most likely because of the picoPSU’s inefficiency at low load levels but still measureable in the other systems, most notably with the ATX configuration.

Having examining the difference in electrical consumption of the Kingston’s Hyper-X LoVo 8/16/32GB DDR3-1600 kits at 1.5V and 1.35V the degree of measurability was surprising. Obviously a couple watts here-or-there are not going to affect your wallet that much either way, but on aggregate it can quite easily add up to an impactful number. With low voltage DDR3 effectively priced the same as “normal” RAM it is an easy way to save some cash over the PC’s lifetime and do your part to reduce unnecessary waste.

Thanks to Kingston for providing the review samples.