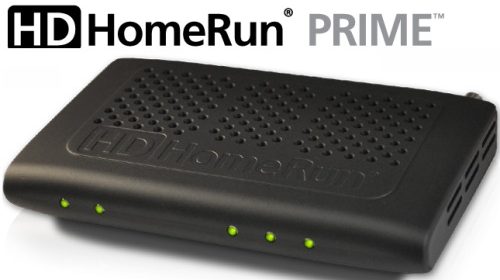 As the long-time leader in network connected digital TV tuners, when SiliconDust announced the three CableCARD tuner HDHomeRun PRIME labeling it “highly-anticipated” would be an understatement.  Offering native support for Window 7 Media Center via its gigabit Ethernet port, the PRIME is also unique in what is becoming a [welcomely] crowded market for Digital Cable Tuners (DCT) not just because of its attractive price point, but also because as a standalone network device it does not require a PC host or drivers to function with other devices or software implementing the Digital Receiver Interface (DRI) specification.    Explicit network support reaps a more obvious benefit as well–providing freedom to locate the DCT and home theater PC (HTPC) in discrete, convenient locations as well as provide a full cable lineup to chassis with limited (or no) internal PCIe expansion.

The HDHomeRun PRIME’s flat black exterior, muted status LEDs and small size provide an ideal form factor for locating in the A/V stack or most any location with access to cable and Ethernet drops because the built in gigabit port exposes the three internal CableCARD tuners to any other device on the same network.  Inside the retail friendly packaging cables for power, RG6 coaxial and Cat 5e Ethernet are provided with the device alongside a couple quickstart-guides for installation and the download location for drivers because a driver disk is notably absent.  Instead of criticism the slight hassle this omission could cause is actually a good thing as it reduces waste with the files only truly useful for a very limited amount of time as new revisions become available online, but also cuts down on support issues by forcing users to get the latest set when installing the PRIME.

Along the front we find five unlabeled status LEDs; which left-to-right [probably] indicate power/readiness (the light is initially red when starting up then turns green), M-CARD status (off when no CableCARD is present and blinks initially, then becomes solid when one is inserted) and streaming status for the three tuners.  With connectors for coaxial, USB providing connectivity for a switch digital video* (SDV) adapter (aka tuning adapter), Gigabit Ethernet and multi-stream CableCARD (M-CARD) ports located on the back.  Except for the guess-work, the LEDs are just about perfect for a device intended for a media room, with enough light output to be useful but not so bright (or blinky) as to negatively impact the room.

To use the PRIME with Windows 7 Media Center (7MC) the setup package downloaded from SiliconDust’s website must be installed on each PC.  For most users this will just require clicking through it, but for those without Microsoft’s .NET 4.0 present the installer will download and install it– which may require a reboot.

After the drivers are installed the PRIME must be configured on the PC by running “HDHomeRun Setup” either from the last screen of the installer or via the Start Menu (located in the HDHomeRun folder) which enables the tuners to be seen by the instance of 7MC on the PC.  The process is documented in the quick guide and is relatively straightforward–just enter the zip code and set each tuner to “CableCARD”.  The last tab in the tool also provides a checkbox for sending diagnostic information to SiliconDust should there be an issue requiring assistance.

With initial setup complete the next step was launching 7MC to configure the tuners and pair the CableCARD with the DCT.  It should be noted that pairing only needs to be done once; after it is completed you still need to go through the motions in 7MC on the other PCs but no additional phone calls to the cable provider are required.  For those not using 7MC with Copy-Freely content it is not necessary to run through TV tuner setup in the application as the CableCARD and Host ID (what you need to pair the two) are also exposed on the PRIME’s web interface.  Installing the HDHomeRun software is also not required, but the included configuration utility is an easy way to find the IP address of the device (it is also displayed as a UPnP media device in Windows Explorer) as well as providing useful diagnostic information.

Given that the choice for “Digital Cable” was provided in the setup application, I expected that the PRIME would also function as a ClearQAM tuner with that selected and an M-CARD absent from the device.  This was not the case however, as 7MC was unable to automatically detect a QAM tuner or provide the option when manually configuring the tuners.  That said using the PRIME as a ClearQAM tuner is an odd use case as any functionality it provides would be better served by selecting one of SiliconDust’s lower priced network attached ATSC/QAM tuners

To test the PRIME three PCs were configured to use it as a DCT inside of 7MC.  For an unknown reason one of the PCs was unable to properly locate and configure all of the tuners on the device so it was necessary to force the discovery process by running “%windir%\ehome\ehprivjob.exe /OCURDiscovery” from a command prompt.  Afterwards each was available and was able to connect properly.  With no prior experience with the HDHomeRun’s tuner sharing feature I found that configuring each PC with all of the tuners produced the most desirable outcome for how I expected it to work (feel free to disagree in the comments).  Mostly because when only one was selected tune requests would fail if another PC was currently using that tuner, even if others were free at the time.

Taking a brief look at power consumption we see numbers that are consistent with the device’s function and in-line with my expectations for a network connected device of this type.  I am happy to see that draw is directly tied to demand, with the device ranging from 4.8W when not streaming to 7.1W (guessing – 0.2 CableCARD overhead + 0.7×3) when all tuners are in use. 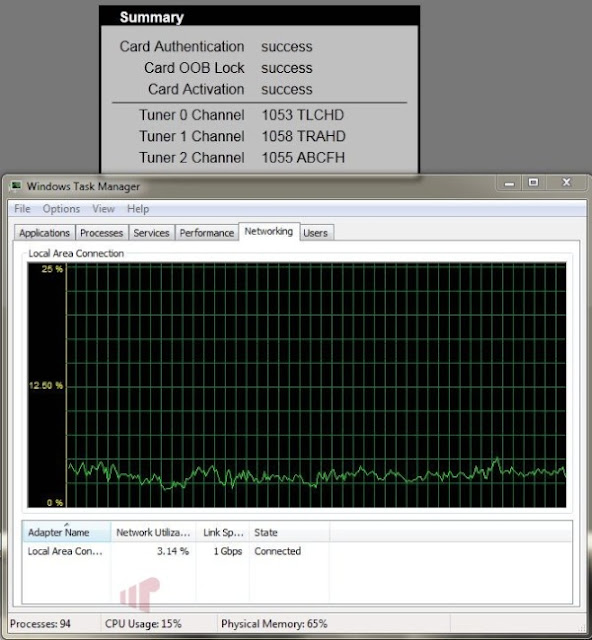 All PC DCTs are essentially network devices, but the PRIME is the first that is explicitly exposed on the network by design.  With that in mind it should be noted that performance may vary among networks depending on the hardware between it and the PC/PCs that receive the data streamed from the device.  That said, given the results captured above while recording three HD streams to a single PC it should be clear that Gigabit Ethernet provides enough headroom for it to function reliably. 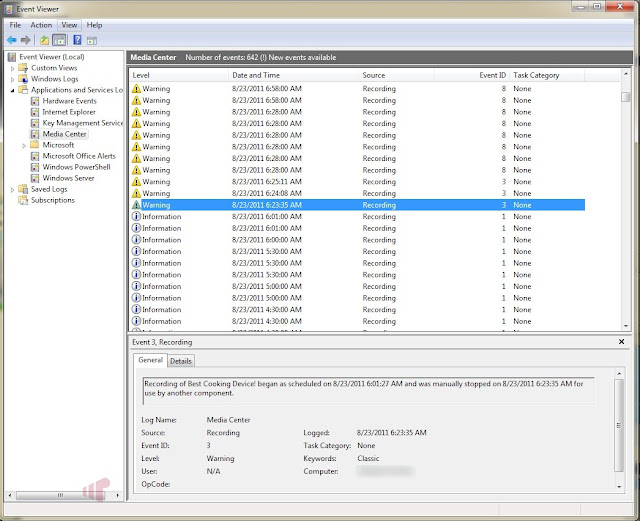 To access the PRIME’s stability and robustness several extended recording sessions were scheduled with all three tuners active across a combination of the three PCs included in the testing pool.  Initial results produced a relatively high fail rate, but after replacing the included network cable with another (Monoprice Cat6) the device became much more reliable with the PRIME able to complete 14 hours of recording before producing the result captured above.  The cabling issue is mostly likely an isolated incident but there does appear to be a larger issue with the device’s firmware, the driver or its interaction with 7MC.  Also, the impact is aggravated because once a specific tuner failed for a specific PC that tuner was permanently unavailable to that PC until the affected machine or the PRIME was rebooted.  Increasing PC count had a small negative impact on overall reliability, with tuner failures occurring more frequently than when only one PC was interacting with the PRIME.  Given the newness of the drivers and device firmware some issues were not unexpected, especially under these conditions.  SiliconDust has been notified of the issues encountered during testing and they are currently evaluating the data for a solution.  Given their proven track record of solid support I don’t think it is unreasonable to expect a quick resolution; we will of course continue testing the device and provide an update as soon as one is available.  Recording issues aside, tuning speed was excellent usually clocking in around three to four seconds when channel surfing and around ten seconds after resuming from standby. 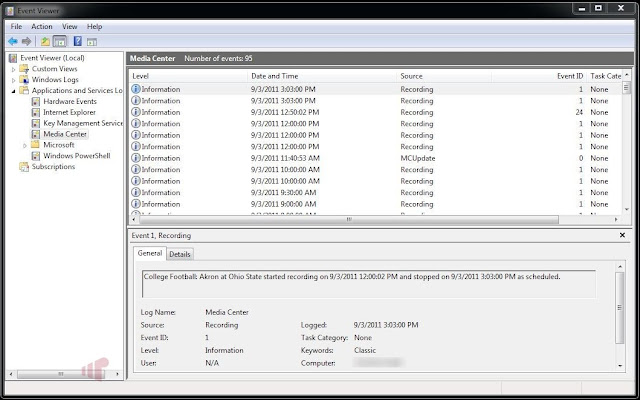 I am happy to report that with the latest beta firmware the PRIME was able to complete 24+ hours of continuous, error free recording with all three tuner. Kudos to SiliconDust for getting the issues fixed so quickly. 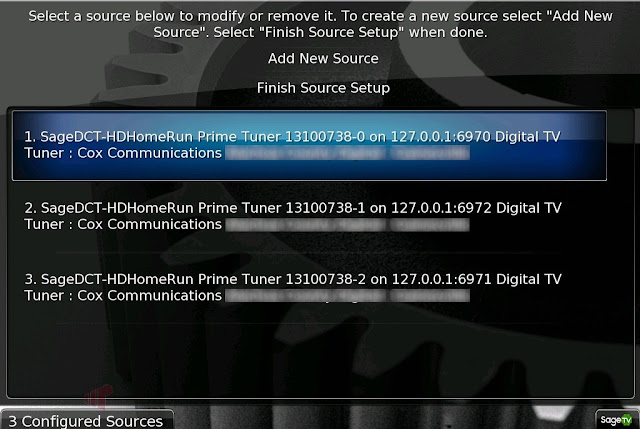 On the PRIME’s product page SiliconDust explicitly calls out Copy-Freely support for the device in MythTV, but SageTV is understandably not listed because DCTs are not officially supported by the company and unlikely now that it is owned by Google with future development as a standalone product in question.  Fortunately, they provide a way for third-parties to enable otherwise unsupported capture devices, so SageDCT was recently updated to recognize and interact with the PRIME, bringing its capabilities to the SageTV platform.

Offering three CableCARD tuners the SiliconDust HDHomeRun PRIME has enormous potential despite the issues encountered during stress testing.  Its unique capabilities including explicit network support, advanced tuner sharing and excellent form factor position the PRIME for success in the Digital Cable Tuner market.  Coupling the feature set with an attractive price ($249.99) the PRIME reshaped the market for CableCARD devices even before retail availability, and I expect that its combination of feature set and value will continue to do so as the product evolves.

Despite the unique value provided but the PRIME, it was impossible to recommend the device because of the stability issues encountered in the initial evaluation. Happily, with a recent firmware update that is no longer the case as SiliconDust was able to identify, and resolve the problems with the device now able to successfully pass the 24+ hour stress test – reinforcing our confidence that the HDHomeRun PRIME would live up to its potential.

Thanks to SiliconDust for providing the review unit.