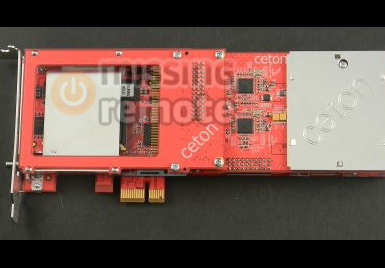 UPDATE for BEGINNERS or NEW TO CABLE CARD:

Before you get started with CableCARD you should know some information that is vital: 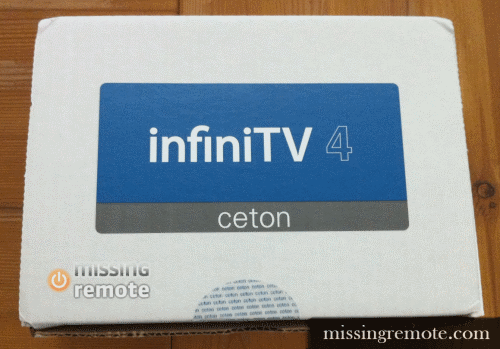 As is almost always the case, things did not go as planned. No fault of Ceton’s though. I went a little trigger happy taking photos of the box and the contents. I like to think I am environmentally conscious and try to do my part to reduce waste so I was happy to see the InfiniTV package is simple, snug and has little waste. The box includes the 1- The InfiniTV 4; 2- A low profile PCI bracket, the card comes with a standard PCI bracket, 3- A coax adapter cable; 4- A Quick Installation Guide. What, no driver disk? That is right; you will need to download the drivers from Ceton via their InfiniTV support page (Update: The drivers are now available to download). 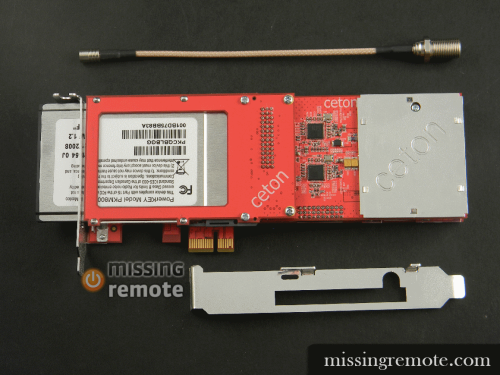 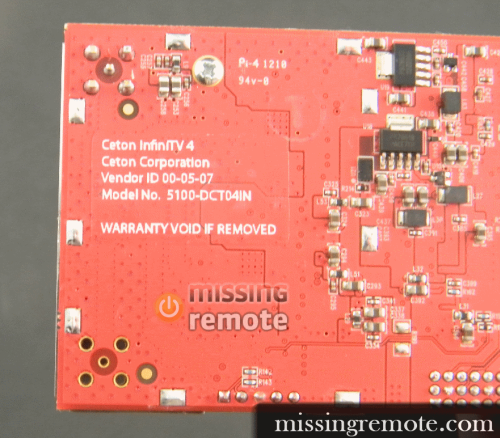 By the time I finished taking photos and actually installed the InfiniTV in the primary test HTPC it was time to head back to work. What concerned me is that, despite my attempts to prepare for the InfiniTV there was a big unknown—the CableCARDs. For those of you who have not had the displeasure of owning an ATI TV Wonder Digital Cable Tuner (ATI DCT) let me explain. I’ve had a total of 3 ATI DCTs, two external and one internal. I purchased them (used) almost six months ago to tide us over until either another CableCARD solution was available or the Hauppauge HD PVR went on sale. I was very excited to try them out and like any excited geek enthusiast tried to prepare ahead of time. I picked up several CableCARDs from my local Comcast store (not an easy feat but more on that later). Out of the three CableCARDs I received, only one worked. Not only that, but the single card that worked only worked in one of the three tuners, the other two failed to recognize it. I had read the horror stories on how sensitive the ATI DCTs were and how unreliable CableCARDs were but I never expected a 2/3 failure ratio. 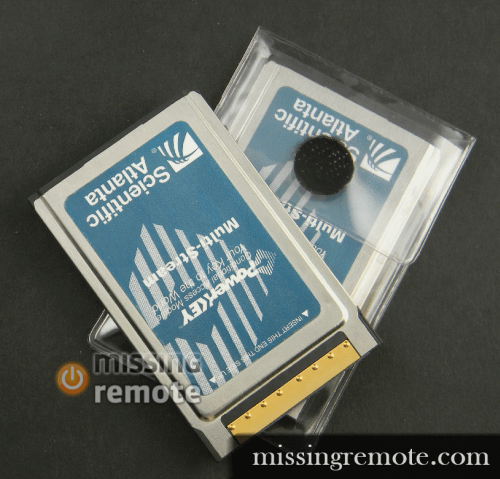 So back on track, I had a meeting scheduled so I had no choice but to head back to work and leave the InfiniTV installed yet not configured. After my meeting I remotely connected to my HTPC to see what I could do over Remote Desktop Protocol (RDP). I had a few issues initially but again, no fault of Ceton’s. Let me offer two bits of advice here:

Once I got the drivers installed, I verified the InfiniTV4 is visible under both Network and Network Connections. I knew I couldn’t run the Windows Media Center TV setup over RDP so time to call Comcast. Note: Under normal circumstances your next step would be to Set Up TV Signal from within Windows Media Center. If you have not installed a CableCARD tuner in the past make sure to follow Ceton’s instructions.

Note: The install also installs a Windows Service for use with Tuning Adapters (TA). If you do not use, as is my case. You can safely uninstall the service via Add\Remove Programs

I knew the drill, or at least I thought I did. I used the device’s website to get my CableCARD ID and Host ID and called Comcast. First thing they asked for was the CableCARD serial number. Uh? I was not asked for this in the past. The technician informed me that they probably had the serial number already in the system but since I had three unpaired Cable CARDs at home she would need to know which one I was using, this made sense. I didn’t have the serial number though and I knew the Windows Media Center CableCARD activation screen didn’t provide it. I was in luck; the device website provided the serial number. After providing the serial number and Host ID (CableCARD ID was not asked for) I was told to wait up to 45 minutes for the pairing and authorization to complete. [Editor’s Note: Comcast definitely has your serial number(s). When they give the card to you, they scan the barcode on your Card and if you look at your receipt it has the serial number on it. So if you’re pressed for time, you can rely on your receipt and jot things down there]

I had a few more hours of work before I could get home and finish the setup so I wasn’t too worried. But it seemed like such as waste of a few test hours. I called my wife and asked if she would setup the tuner for me. She was a little reluctant but she also had a show she wanted to watch, and eventually she agreed. I told her to follow the instructions provided on the Quick Installation Guide, skip the CableCARD activation step and give me a call if she ran into any issues.

Five minutes later I get a call—it worked. I was amazed–no issues, no questions, and in less than five minutes my wife and daughter were watching BravoHD in the living room and my son Cartoon Network HD in his room via a Media Center Extender (MCX). This was huge; my kids have not had Live TV in their bedrooms other than a few ATSC and ClearQAM channels in months. 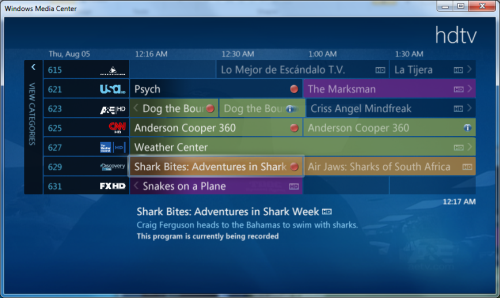 I asked my family to relax and watch as much HDTV as possible over the next couple hours. While they enjoyed their Live TV I had fun going through the device’s webpage. As you can see below, everything you need and more is available. For those interested I’ve also made a corresponding Media Center Add-in that I’ll make available to download at the end of the review series. You should not need to access once everything is setup and working well, but I wanted to be able to quickly access the tuner temperature information via the 10’ interface.

As previously mentioned, the Spousal Acceptance Factor (SAF) is something most of us who live with others must comply to. In my particular case, SAF has a direct correlation to my purchasing power. As such, say hello again to Gatinha (aka Mrs. Mikinho):

Ceton, thank you for the InfiniTV 4—my hats (or ears) off to you. Finally a product that works, and just in time for Shark Week! I have been waiting (and increasingly less patiently) for a product to come along that would facilitate TV time. I’ve been told “it is working; it is the consumer, not the product”. I beg to differ. And if it is, why is he spending our money on products I can’t use without breaking or having to “learn” how to use? Sometimes this would lead to me taking out my frustration on the remote control (yes honey, I am the reason it rattles).

Tuning into your favorite TV shows like The Big Bang Theory, Castle, True Blood and Dexter, should be effortless and simple, right? Wrong. In fact, it has been a very frustrating ordeal and has been for the past 6 months or so [Editor’s note: Approximately 6 months ago Comcast reduced the number of ClearQAM channels available in our area. We went from ~40 channels down to 6]. Here are a few examples: 1- I am a channel-hopper, I like to flip through channels. With our previous setup I could not do that. It was simply too slow—slow, slow, slow! Ok I may be exaggerating just a smidgen due to my lack of patience, especially during downtime. But when making a selection it would take several seconds to respond and then a few more to get a clear picture. 2- Constantly receiving a weak signal error. 3- The channels would lag regularly. It was almost impossible to watch a show in its entirety, from start to finish, without any interruptions of some sort. In a nutshell, I was very unhappy.

When my husband mentioned this new product that was going to solve all these issues I’ll admit I was skeptical. In fact, I tuned out the entire conversation. I thought to myself, “Great, another tuner that is going to magically work!” But I love my husband and thought I would give him one more chance.

I am very pleased with the outcome. Immediately I noticed how much faster it works. I was thrilled. After experimenting for an hour, changing channels, recording, etc…I realized there was no lag time. No weak signals. I can watch a show and record several others at the same time, an option I did not have before [Editor’s note: Not exactly true, for the few ClearQAM and ATSC channels we could record up to 9 channels at once but having to explain that doesn’t bode well for stability and ease of use]. Everything is working perfectly, better than I had expected. I also noticed an improvement in the picture quality; the HD channels seemed more clear and crisp. Not sure if the Ceton InfiniTV4 tuner has any effect on the quality of the picture but I saw a great improvement.

If you are encountering the same issues, or similar, as I have in the past then I highly recommend investing in the Ceton InfiniTV 4 tuner. It is pleasing to know that there is finally a product out there that works and that I can use without any disruptions. My only question, why has it taken so long?

This is great news for my husband who will never again have to hear me cry out: “Why can’t we just watch normal TV like normal people!” 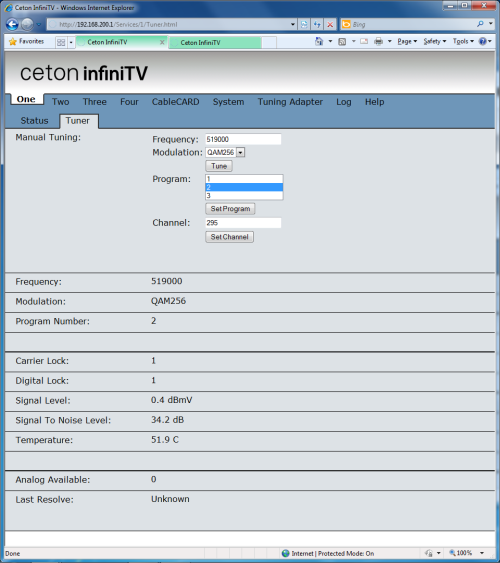 Despite the urge to come home and enjoy a few hours of HDTV bliss, I was on a mission. I had spent the previous night scraping together five make-shift test HTPCs. My wife also wanted her dining room table back. 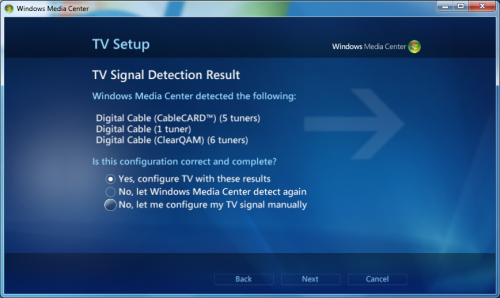 I won’t go into much detail in Part I but here are some highlights: 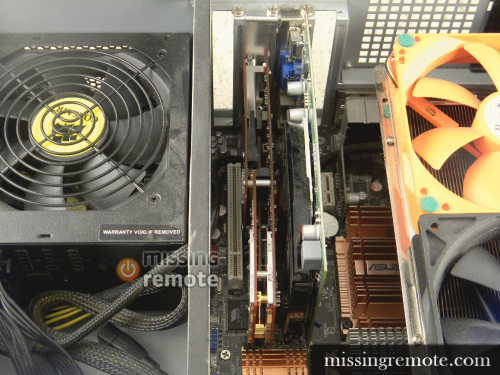 Now for the bad news:

Check back for Part II where I will go into detail on performance and tuner comparison. Part III will cover SageMCTuner, External PCI-Express via the Magma Express 1 and virtualized HTPCs. Many thanks to Ceton for providing an early pre-order unit. And special thanks to Jeremy Hammer [Ceton] for his patience and help answering questions.