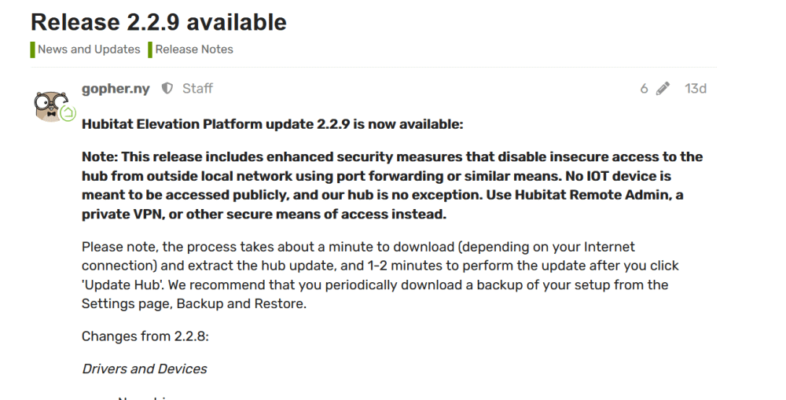 While it hasn’t always been easy, I am a big fan of my Hubitat C-7 Elevation hub. One of the great things about it, and the other Elevation hubs that the Hubitat keeps on making them more awesome. Today they released the 2.2.9 firmware update which among a HUGE list of changes, drivers, and improvements, also includes some security “enhancements”. While I expect that the new rule engine will be a big improvement, the security changes might come as an unwelcome surprise if you’ve relied on them to get remote access to the hub.

Now, to be 100% clear, Hubitat is totally correct when they say you shouldn’t be doing the thing that these changes are intended to block (direct remote access to the hub), they also maybe don’t need to force it – especially now that they sell a reverse proxy service. Although, maybe I’m wrong here… Definitely some internal conflict… I don’t like heavy handed behavior, but maybe they should keep users from shooting themselves in the foot, especially because it could blow back on them…

FWIW, I’ve been running 2.2.9 for quite a while now (BETA FTW), and it’s been great. No stability issues, and even though I run a mutli-subnet network the above changes didn’t have any impact on me.