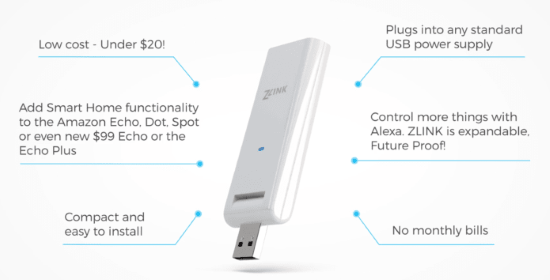 Installation cost is one of the major barriers to home automation. In addition to the cost of your switches, bulbs, etc. you also need to purchase a home automation controller (HAC) in most cases. The other major issue is complexity, which is where the development budget of large companies like Amazon and Google help immensely. They have the $ to make UX not suck. With the release of the Amazon Echo Plus, it seemed like Amazon was trying to help on both counts; that is until the world discovered that instead of going for the largest device ecosystem with [mostly] guaranteed compatibility (<cough> Z-Wave) they opted to put a Zigbee radio in the hub.

ZLINK promises to sort this oversight by Amazon via a $20 USB dongle that can plug into pretty much anything with USB power support. It is still currently in the funding stage, so buyers have an opportunity to get it for even less than that. Depending on your goals, or the goals of you Echo owning, but less technical friends and family, this might be the perfect, easy, and cheap way to put more automation into your home. Just be careful: home automation is addictive :).