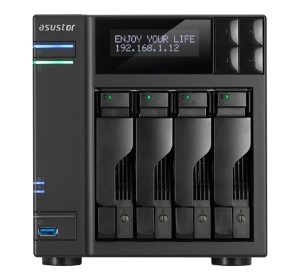 AFAIK, Asustor is the first to bring Braswell NAS out to market. At the higher end of the consumer/SOHO NAS market this model looks quite interesting both as a NAS and a playback device.

Asustor is one of the recent entrants in the NAS market. Over the last couple of years, they have tried to play in the same space as QNAP and Synology, targeting power users and SMBs. They have a wide variety of hardware platforms to choose from, ranging from ARM-based 2-bay systems to Xeon-based rackmounts. Asustor became the first COTS NAS (commercial off-the-shelf network-attached storage) vendor to introduce models based on Intel’s 14nm Braswell SoCs back in September 2015. In this review, we take a look at the performance of the AS6204T, a 4-bay model.