The pace of improvement in the 802.11AC market has been blistering, and I had a chance to talk to NETGEAR about their newest top-end entrant the $299 Nighthawk X6 (R8000) – AC3200 Tri-Band Wi-Fi Gigabit Router yesterday. Before digging into the specifics of the R8000 it is critical to understand what exactly the X6’s AC3200 actually means. Unlike the AC1750 and AC1900 class routers that preceded it the Nighthawk X6 has three discrete radios; one 2.4GHz and two 5GHz. The “3200” is the sum of total bandwidth (600 + 1300 + 1300) available across these radios, but it be made absolutely clear that two 5GHz radios are not bonded so each device that connects (even another X6 media bridge) will only have 1300Mbps (theoretical) available. That is not to say that this isn’t a useful feature, it actually solves a problem that I have experienced, just that it is important to understand what the technology actually offers. Full PR and more from our conversation after the click.

With many of the same basic features (Gigabit Ethernet, 802.11AC, ARM SoC, etc.) It would be easy to think of the R8000 as an R7000 {http://www.missingremote.com/review/netgear-r7000-nighthawk-smart-ac1900-wi-fi-router} with an additional 5GHz radio stitched on, but that would not be entirely accurate even though they share the same 1GHz SoC the R8000 also included three dedicated per-radio “offload” coprocessors. This could improve Wi-Fi performance in some use cases, but the main tangible benefit should be realized in other non-Wi-Fi specific workloads, like serving files or acting as an AirPlay compatible iTunes server. This is one of the things I am particularly interested in because while the R7000 had quite reasonable performance as a NAS it lagged what could be obtained from more specialized hardware. There will be a power penalty for the additional processors and radio. I wasn’t able to find out how much, just that the power brick was bumped from 12V 3.5A to 12V 5A. 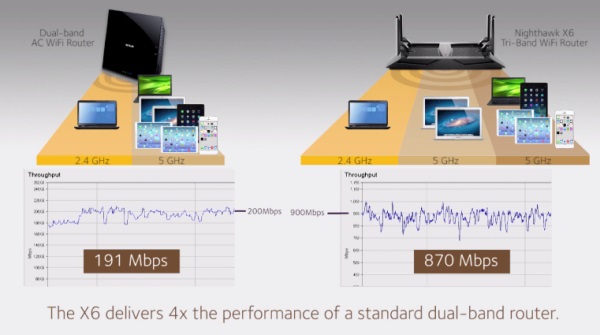 Coprocessors are interesting, but the most distinctive thing about the Nighthawk X6 is the inclusion of two 5GHz access points (AP). While it would be awesome if the R8000’s six streams were available to a single radio, having two discrete radios is an interesting approach to solving the very real drop in performance when mixing 5GHz devices together on a single radio – one that I’ve actually experienced. Obviously there are other ways to manage the issue (e.g. I only let my media bridge use the 5GHz band), but they reduce the flexibility to deliver maximum performance to every device. With two APs available, the R8000’s “SmartConnect” feature will assign particular devices discretely based on performance, distance, etc. and via a simple load balancing mechanism. Assignment only occurs when connecting a device (i.e. it does not dynamically balance each connected device each time a new device enters the mix) so there may be scenarios where it would be better to manage each AP separately (which is possible). All told, if this feature works the way it is supposed to, the R8000 will reap significant per-device throughput benefits, especially as more client devices add 5GHz support. Initially SmartConnect will only work across the 5GHz radios; there are plans to include the 2.4GHz band as well, but the time frame for that hasn’t been defined yet. I have put in a request for a review unit, so hopefully this is something that can be tested and validated.