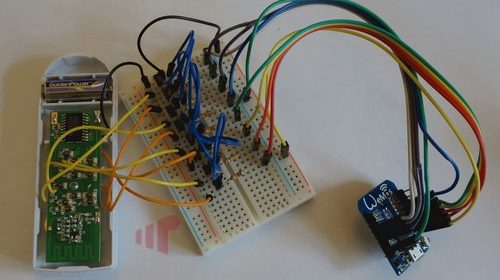 I’m not sure exactly why my wife came home with a cheap (£10-15) set of 433MHz remote controlled switches. While I gave her some grief initially, I’m glad she did. Because for a few £ more we now have four “smart” IP switches that can be controlled from a home automation controller (HAC). And since we have an Amazon Echo, voice as well.

It really bugged me that we had these remote control switches and they didn’t integrate with the rest of the system. A few approaches to programmatic integration were attempted. First, I tried to catch/decode/transmit the signals sent by the remote. While this should work in theory, I wasn’t able to get it going, I suspect this had to a lot to do with the quality of the components I was using, but there could easily have been other factors as well. After thinking on it a while, it occurred to me that it would be significantly easier to reuse the existing remote. Grab your soldering iron, and let’s get to work.

Most of the work is simply mapping the buttons on the remote. I did this using a single wire to simulate a press by connecting the circuit (black wire to various points on the board). When each button is located, solder a wire to that point.

Grab a copy of ESPlorer for editing and exporting the files to the WeMos, then download the webserver files from GitHub. Assuming you followed the wiring scheme above only wifi.txt will need to be edited.

Change the first two lines to have the name of your SSID and the password required to connect. If you’re running 192.168.1.x, leave the rest alone. Just make sure to add a static DHCP assignment (or change the third line to a safe static IP) in the router. Upload the files and it should startup the webserver exposing each button.

While the UI is nice and a great endpoint if you don’t have a HAC, it was not the end goal for me. For that, we need to integrate the button presses into these centralized systems. Initially, I did this with a Vera Control system using scenes. Each button press corresponds to a URL in the format “http://192.168.1.99/X” where X is the digital input on the WeMos (e.g. D1 = 1). Calling this is simple with a bit of LUA in the Vera:

This worked great. But when we got an Amazon Echo, I ended up using a different mechanism to manage each “device” leveraging BWS Systems “HA Bridge”. It’s great for many reasons, including Harmony and Vera integration. But, it also allows you to make discrete HTTP GET requests in a custom device.

So while it is possible to set it up to use the Vera’s scenes (one for On, one for Off), it’s more efficient to just call the necessary URLs directly to turn a switch on and off.