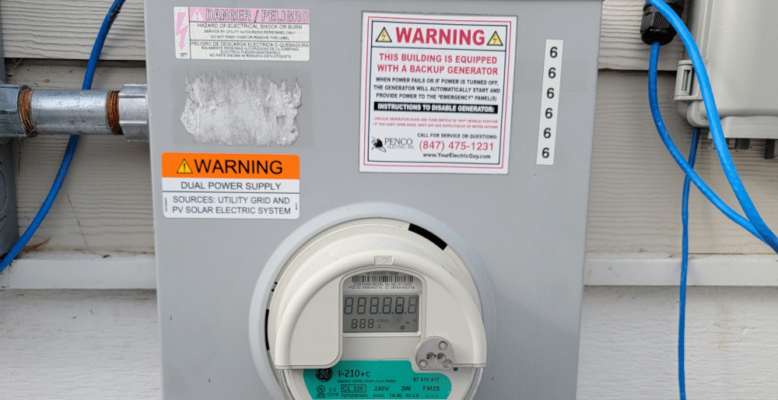 There have been several oddly similar anti-net metering op-eds floating around the national newspapers recently. I say “oddly similar” because they tend to repeat the same talking points, argued with little factual backing, with a clear intent to invoke an emotional “that’s not fair” response from readers using class-based rhetoric around how the scheme is a “subsidy” for the rich. It’s almost like they’ve been handed a set of talking points to repeat – I wonder who would do that🤔?

I am avoiding linking to the op-eds because I would rather not generate more clicks for them. If you’re interested they aren’t hard to find by searching for “net metering”.

Before getting into why that’s a load of hogwash, let’s briefly explain what net metering is. Broken down, it is a very simple concept. When someone with a solar photovoltaic (PV) installation produces more electricity than they are currently using, it gets pushed in to the grid, providing energy that the utility can distribute to other consumers and doesn’t need to generate, transport across long distances, or buy from a supplier. Those kWh become credits, so when the PV owner starts pulling from the grid at night, they don’t have to pay for that electricity until they run out of production credits. This is a pretty simple math problem.

Most of these anti-net metering opinions are making a cost-shifting argument summed up in mostly the same way. Only “rich” people can afford PV systems. Net metering rewards “rich” people for installing PVs systems. Because “rich” people are getting kWh matching credit for the electricity that their systems produce, they aren’t paying as much as they should to support the grid, and not-rich people therefore have to pay more. This isn’t fair. Unfortunately, for them, this cost-shifting argument has been studied, and widely discredited. The thing that gets me in all of this is that energy companies benefit from their customers installing panels, they just seem to be pushing to change the model so that they can slow adoption to “protect” the legacy business model, and capture more benefit from the investment that PV owners made.

As a “rich” PV owner that participates in our utility, ComEd’s, net metering program obviously I have some bias. But it’s also worth noting that although we benefit from the electron exchange that net metering offers, our system only offsets our bill by ~60% (stupid roof design!); which will only get worse, now that we have an EV. So we, like many PV owners, are still paying into the system; especially during the winter months. Which brings up a good point. Most of our energy production happens when it’s hot in Chicago. And, because when it’s hot here, it’s also very humid. We’re running the AC, my neighbors are running the AC, and their neighbors are running the AC… This puts a significant demand on the local grid. Anything we produce offsets peak demand on the grid; making ComEd’s job easier. In a flexible pricing model any surplus that we push into the grid would have a higher rate because demand is higher when it is produced. Just saying…

When I project my own behavior should net metering restrictions become thing, the best long-term option would to be a shift to local storage (i.e. on-site batteries). This would effectively produce the same result that I have now (a kWh for kWh exchange) without providing my utility any benefit besides the offset from our demand during peak. The unfortunate side effect of this would be higher initial installation cost. But, when considering the additional benefits that local storage provides it’s not a simple ROI difference in retail kWh minus net metering kWh over time calculation either.

Local storage also reduces risk to power outages, which is exactly the reason why we installed a natural gas generator at our house shortly after moving in; if I had to do it over again, knowing what I know now, I would have gone for batteries anyway, but I digress. We could have made that work, but there are many folks where bumping the installation cost by several thousand dollars would put PV out of reach, which is sub-optimal for everyone but the company’s shareholders.