The Amazon Fire TV and it’s use while traveling

With all of the media players and sticks out there to choose from, one of the more popular ones on the rise for many reasons is the Amazon Fire TV and AFTV stick. With their small size you can really take either one out while traveling without having to hook up a laptop and what not to stream entertainment. So I started out the testing of the unit back in February the first time around for a getaway staying at a hotel. Because that particular hotel had a website that you had to click on to accept their terms and services and enter their password, we were unable to use the AFTV because there was no way to launch a browser within the AFTV at the time. So we were stuck using the laptop which ended up working out fine anyway, but I have to say it was very disappointing. The impression that I had received from the units small size, portability and the way advertised is that it would give you the ability to use them out on the road while traveling. Maybe it was my wrong impression and then an update happened.

The update that hit for the AFTV gave it the ability to allegedly launch a browser automatically to the website for a guest to enter in any user names, passwords and accept any terms of services that you needed to for hotels and what not, so that you could go on your merry way to use your AFTV. In late May I had another opportunity to try this out since that firmware update while traveling for a work related function. As soon as I got up to our room I couldn’t wait to see if it worked this time. Sure enough once I put the password in the AFTV for the units Wi-Fi, the AFTV populated that terms of services/password browser automatically with no prompting by me. I entered everything in and it worked! No messing around, no nothing. It worked so well, I never even had the opportunity to get a screen shot or picture of it; MY BAD! For this hotel, it worked like a charm. Very few drop outs or pauses and I can stream what I needed to through Kodi and also use Netflix, YouTube and other streaming abilities with the unit in very high quality video. It worked as it should. 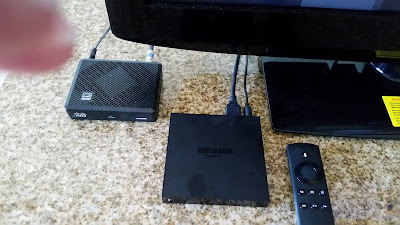 Then the next trip, the one I’m currently on now is my vacation where I would be away for more than a week and really get a lot of time with the AFTV to test it out further before writing this article. Being that the events were so close together, I figured things can wait and I’m glad I did. This hotel did not have the terms of services website and just gave you the user name and password and on you went for all of your devices. Everything connected as it should, but my god did we had a lot of problems with their Wi-Fi crashing, slowing, freezing up and what not on all of our devices. The signal strength was between 4-5 bars but the fluctuation of the download mbps was anywhere between .5-3.5 mbps with their network having to be continually reset due to crashing on an average of 4-5 times per hour. Nothing a mini NAT router would have been able to help with that I am aware of, however I will purchasing one for my next outing just in case because you can get up to 300 mbps and really help with the extendibility for a network where you are staying that is lacking in range for about $35. Also in the middle of streaming a Netflix and YouTube video several times, the AFTV switched to something else without anyone touching the remote which was really odd. Our whole family looked at each other as if someone was fooling around with the remote only to notice that it was lying there by itself on the table. What in the world is going on?

Some notable differences between the hotels we stayed at. The first one had a limit of 3 devices per room that could be connected to the Wi-Fi at once. Certainly an inconvenience if you have more than 3 devices that you may need to use Wi-Fi on but maybe not as much as you think when everything works right and doesn’t crash. The signal strength was only a 3-4 bars for the Wi-Fi for the first hotel with a much higher mbps rate that was much more consistent at its bitrate between 3.5- 7.5 mbps while the second hotel we stayed at as mentioned earlier before was at a 4-5 bar signal strength with the bitrate between .5 and 3.5. The second hotel had no limits as to the devices that you could hook up which also had a problem with their network crashing all of the time. Also both hotels had some bitrate issues during peak times of about 7pm-10:30pm when everyone is inside and back doing from what they are doing. The second hotel in particular I am thinking someone else was using another AFTV unit that kept switching ours from time to time. I wouldn’t think that would be possible being that they are blue-tooth paired but that’s the only explanation I have unless our unit is going bad. Either way that doesn’t fair well for the AFTV unit we are currently using on our trip. 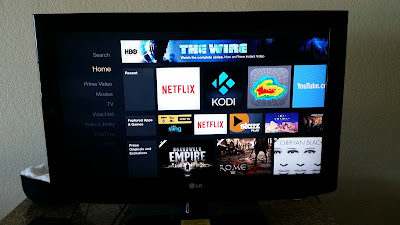 Overall, while initially disappointed with AFTV back in February because it couldn’t connect at the hotel we were staying at, I am pretty happy using the unit while traveling. There are many obstacles while using a streaming unit in a hotel because you are sharing the bandwidth of the Wi-Fi with all of the residents staying at the establishment. A solution that may be able to assist with range and bandwidth issues is a mini NAT router that you can pick up for $35 bucks, but it would not be a miracle worker either. As I was finishing this writing this article, the second hotel had called their IT department due to nearly a week of several upset guests not being able to connect through their Wi-Fi most of the time without it crashing is something no device that I am aware of can help but one; A hotspot on your mobile phones network. I did try using this but because we were located remotely, getting a good data signal wasn’t very feasible and was not a solution for our situation. I can say that the device did connect well when using it, we just didn’t have a strong enough of a signal to resolve our issue. Before getting to the hotel, during our drive we used our mobile networks hotspot for 3 straight ours using the ipad so that the family could watch Netflix during this drive with only 2 interruptions less than 30 seconds, so it is a viable solution assuming you have the right data plan to prevent overages and a strong mobile data signal. ☺ All that being said about network issues and problems are out of the AFTV’s control and you cannot fault the unit for that. On that note, I have found that while using the unit at home or away that the Wi-Fi receiver to be very good and I would not fault the unit or infer that it is using an inferior Wi-Fi receiver. With all the network concerns being mentioned, it’s safe to say that your experience with the unit will vary greatly depending on the establishments Wi-Fi service itself.

Best of luck regarding your streaming devices while traveling. Let us know your experiences!